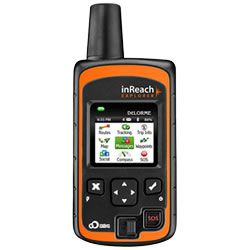 We recently had a chance to ocean test the new DeLorme inReach Explorer on a passage from Sarasota, Fla., to the Dry Tortugas in the Florida Keys. Like the original inReach (see Practical Sailor, March 2013 online) and the second-gen inReach SE, the first such standalone device designed to send and receive texts by satellite, the Explorer is primarily a satellite texting device. The Explorer has a small display screen like the inReach SE, but the Explorer features a built-in compass, barometer, and accelerometer to give it some basic standalone navigational functions.

When the display is in the map view mode, it shows waypoints, tracks, and messages on a screen, but the screen is devoid of any real map-detailed landforms, etc. You can’t use the Explorer to weave through reefs, but it can help you backtrack over where you have been, which is handy if just need to get home.

To navigate as you would with a map-loaded GPS, you must pair the inReach Explorer via Bluetooth with an iOS or Android device that has DeLormes free Earthmate app and its pre-loaded charts. (We used NOAAs digital charts.) The app lets you plot routes, place waypoints, etc. You can import waypoints and routes (KML, KMZ, GPX files) from other devices and mapping apps like Google Earth. Earthmate also lets you text directly from the paired device, which greatly accelerates texting, because the Explorer has only three buttons.

The Explorer offers global coverage through the Iridium satellite network. Testers sent and received dozens of messages from our seat in the cockpit, well protected underneath a full bimini top.

Specs put the battery life at a 100-hour minimum, when sending a track position at the default 10-minute interval and with a clear view of the sky. We recorded 89 hours in this mode, but this included sending and receiving dozens of messages and long periods of searching for satellites as we were checking the limits of its reception in various parts of the boat. You can extend battery life by reducing the frequency that your position is reported for tracking.

The Explorer has a two-step SOS button. When activated, your distress signal is relayed to GEOS, a 24/7, global search-and-rescue monitoring center, and then to emergency responders. Anyone interested in the SOS feature on this or similar devices should read our article on Satellite Emergency Notification Devices (SENDS) in the August 2012 issue.

The Explorer was designed to meet the tough Radio Technical Commission for Maritime Services SC-128 standard for SEND devices, a less stringent version of the standard applied to Personal Locator Beacons (PLBs). It passed our 1-meter drop tests (multiple drops onto a fiberglass deck) and our immersion test (submerged to 1 meter for 30 minutes). It does not float, but you can easily add a flotation collar.

Because the battery is internal, there is no need to worry about a battery compartment leaking. (Both the original inReach and competing SPOT Messenger use replaceable AA batteries.) The Explorer can be paired with a solar-powered extreme battery pack for long-term use in remote locations. It also can run on any 12-volt system or 110-volt system via a USB adapter.

Suggested price for the Explorer is $379. Service plans start at $12 and go up to $100 a month. One appealing option is the freedom plan, which lets you pay by month ($35 per month for basic messaging), with no annual contract. Comparing a one-year contract under DeLormes $25-per-month Recreation messaging plan to that of the SPOT Messenger service, you pay about $150 more for the inReach. Its hard to compare, though, since SPOT requires a year contract, uses Globalstar satellites, and is send-only.

The Explorer is a very handy tool for voyaging, and it offers many advantages for those who want to stay connected. An EPIRB or PLB should still be your primary tool for distress signaling on offshore passages.