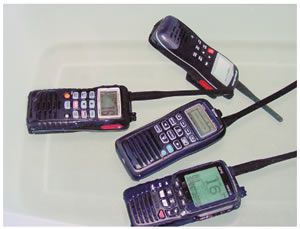 After charging the test units for 24 hours, testers ran each radio through a series of bench tests-including transmitter power output, frequency accuracy and stability, and receiver sensitivity-using our Ramsey COM3010 service monitor. All radios in our test group met industry standards with regards to the above tests, although some did it slightly better than others. Testers took transmitter power measurements (high and low power) directly off the radio antenna port.

Frequency accuracy is defined as the ability of the transmitter to send out signals on a selected frequency. Frequency stability measures the transmitters ability to maintain frequency accuracy over its entire temperature operating range. The Federal Communications Commission (FCC) mandates an accuracy of 10 parts per million (about 1550 Hz off frequency). Industry groups typically call for half that error.

Receiver sensitivity is the ability of the radio to hear a weak signal. Normally stated in microvolts, marine VHF receiver sensitivity runs from 0.22 to 0.35, with industry groups recommending a minimum of 0.50 microvolts. Each VHF was tested for the minimum signal it could receive at a specific industry standard setting between background noise and generated signal. All the radios that we were able to test for this proved to be more than sensitive enough to pick up weak signals within industry standards.

One very important function of a handheld VHF radio is its ability to reproduce the sounds of incoming voice communications via internal audio amplifier and speaker. If you can’t hear the audio, it doesn’t really matter how well the transmitter or receiver work.

To rate the audio system of each radio, we measured levels at maximum volume while inputting a 1 kHz tone. Decibel measurements were taken at 1 meter and measured with a Radio Shack digital sound meter. Testers also monitored a weather channel at various volume levels to determine overall sound quality.

The ergonomics ratings indicate the ease of operating each radio, especially with one hand as well as the clarity of its display, and includes an allowance for size and weight. Displays were rated based on the size and readability of the screen, the quality of the information displayed, and the backlighting.

All of our test radios are not only submersible, but also designed to float if dropped overboard. Each of the radios was submerged in a container of fresh water to a depth of one foot for 30 minutes (radios were weighted to keep them on the bottom). The radios were turned on and set to channel 16 prior to being dropped into the water. The operation and effectiveness of any illumination, including any overboard locator, LED lights, or glow strips was observed in a darkened room.

After the waterproof tests, testers verified the correct operation of the radios buttons, controls, and display. Audio quality was also checked for degradation, and battery compartments were opened (after the exterior was dried) to check for leaks.

To test battery longevity, each unit was exposed to typical hourly operation requirements until they stopped working. The industry standard hourly duty cycle for handheld VHF radios is generally defined as 5 percent transmit, 5 percent receive, and 90 percent standby. To simulate this, every hour, the radios were keyed for a total of three minutes and tuned to a weather channel broadcast at a moderate volume level for five minutes.

Chargers play a big role in the life of any portable electronic device. Testers evaluated the various types of chargers and charging options for each device based upon their suitability in the marine environment.