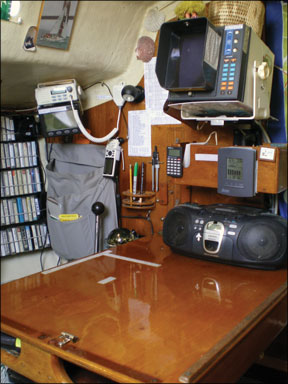 The 30th anniversary of the Singlehanded TransPac (SHTP), which starts July 12, includes an entry list of widely diverse designs with most of the 23 boats measuring 40 feet or less.

Though the race has jestfully been dubbed a “bug light for weirdos,” its record book includes many big-name racing and cruising sailors. Among the former racers are world-class navigators Mark Rudiger and Stan Honey, the late Steve Fossett, Vendée Globe vet Bruce Schwab, and John Guzzwell of Trekka fame.

This year, Practical Sailor contributing editor Skip Allan, of Santa Cruz, Calif., also will contest the SHTP, 30 years after he raced the inaugural event, where he and his boat Wildflower finished second in division.

Allan, 63, took time out from pre-race preparations to present his report on singlehanded sailing. The first installment of the report, “Going Solo,” ran in the June 2008 issue. This month, Allan focuses on the electronics, safety gear, and routing tactics he employs when racing alone. It is important to note here that Practical Sailor does not condone sailing without keeping watch, a very risky reality that singlehanders face. For a closer look at Allan’s boat, deck gear, and seamanship tactics, see the June article.

In the 1978 Singlehanded TransPac, Wildflower—a 27-foot custom Tom Wylie design—had no engine and no electronics. Navigating to Hawaii was by dead reckoning and celestial navigation. Little has changed abovedecks in those 30 years, where a compass, nylon shroud telltales, and a masthead Windex remain my instruments of choice.

This year’s race requires two ship’s batteries be carried aboard, totaling a minimum combined 120 amp hours, and an energy management plan and worksheet must be submitted with each entry. This requirement encourages competitors to look closely at their electrical needs, method of charging, and backup contingencies for power failure.

Wildflower carries two deep-cycle, wet-cell batteries, a Group 24 and Group 27, that total 165 amp hours. The batteries are charged by two 43-watt solar panels. These solar panels put out a combined nominal average of 4.6 amps each hour during the day and can be tilted toward the sun by means of adjustable mounts on the pushpit.

The solar panels can be supplemented by the 35-amp alternator on Wildflower’s 10-horsepower Yanmar single-cylinder diesel. This engine can also be hand started with a crank should the need arise. With electrical power available, Wildflower now carries a fixed VHF with both masthead- and stern-mount antennas. Also onboard is an Icom 735 SSB radio, and a Pactor 3 modem used for gathering GRIB (gridded binary) weather charts and weather fax, sending email via Winlink (www.winlink.org) on computer, and communicating with the SHTP fleet, including broadcasting the required daily position reports.

Belowdecks are two handheld GPS units, one of which is connected to a stand-alone Si-Tex Automatic Identification System (AIS). This AIS gives the name, type, position, course, and speed of commercial shipping within a 32-mile range. Supplementing the AIS, a Furuno radar can be set to a
4-mile guard zone that also alerts to the presence of shipping vessels and the approach of night-time squalls.

A great savings in power consumption comes from the use of an LED bulb in the masthead tri-color light. (Practical Sailor recommends using U.S. Coast Guard-approved lights. A test of these LED tri-colors is in the works.) LED tri-colors draw about 0.1 amp, saving more than 20 amps during the night as compared to using the normal 25-watt incandescent bulb.

The backup to GPS navigation remains celestial navigation, and a sextant and tables are carried onboard Wildflower, along with a small portable radio that can be used to home in on Hawaii’s AM radio stations.

While Wildflower’s electronics toolbox has grown in the last 30 years, I aim to keep my electrical appetite to a minimum while taking full advantage of the new technology. The gadgets make navigation easier and safer, but having blind faith in them would be a dangerous folly for any sailor.