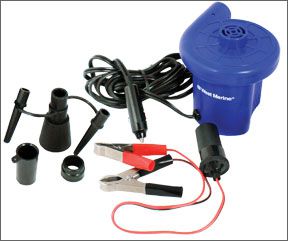 Whether you need to pump up an inflatable dinghy or your favorite summer water toy, a 12-volt inflator/deflator can come in handy when youre away from shorepower. The convenience of this device became evident during our recent evaluation of marine tenders and dinghies. Before the on-water dinghy testing could commence, Practical Sailor testers first had to pump up the 12 rigid inflatable boats (RIBs) being tested. As our test site was lacking 110-volt power-and it had been more than a decade since we last tested them-we decided it was an opportune time to review portable 12-volt DC inflators.

As with our last evaluation (Aug. 15, 1997), Practical Sailor rounded up a handful of products to evaluate for the test. All test pumps run on 12-volt power, and all are high-volume, low-pressure air movers. The power cords can be lengthened, but its important to use the right size wire for the run (likely 10 gauge) and equally rated marine connectors to prevent voltage drop, less than optimum performance, or a fire hazard.

From Metro, a U.S. company that specializes in home and commercial vacuum cleaners, we tested the Magic Air. We also reviewed the ID20 from Rule Industries, a subsidiary of ITT Corp., which also is the parent company of LVM, maker of our previous top pick for an electric dinghy inflator. The third pump, the Bravo, is made by Scoprega, an Italian company. Rounding out the field is the inflator by mega-marine retailer West Marine.

To evaluate the pumps performances, testers used them all to inflate the 12 dinghies. All of the test dinghies are hard-bottomed, and manufacturers recommended inflating them to at least 3 pounds per square inch (psi). While we were attempting to inflate them to makers specifications, testers noted that the four low-voltage pumps were having varied degrees of success. Testers used each pump on various boats, changed nozzles and adaptors, and made lots of notes on how fast and efficient the pumps were. In some cases, we could not get the boat to the suggested pressure and had to top off inflation with a foot pump.

Testers measured how loud each pump was using a decibel meter from 1 foot away and noted the pressure each pump inflated the dinghies to. Once all of the dinghies were filled, testers compared notes and rated the field, taking price into consideration.

The Magic Air 12-IDA is a rugged, high-power inflator/deflator that looks like a double-ended torpedo with a handle on top. It is symmetrical and has no markings as to which end blows and which sucks.

The all-steel construction has an orange baked-enamel finish, and its larger size produces a high volume of air flow, 20 cubic feet per minute, but at a low velocity and low pressure, 0.4 psi. The muffled lower frequency noise, at 94 decibels, makes Metro sound like a vacuum cleaner. However, it lacks the pressure to really do the job, in our opinion.

It comes with a 10-foot cord, clips for connecting it to a 12-volt battery, two adaptors, and five nozzles. (Other size inflator adaptors and hoses can be purchased separately.)

Bottom Line: The Metro has an interesting design but just did not have enough pressure to inflate our test dinghies.

The Rule ID20 is a powerful, high-speed inflator/deflator designed specifically for rapidly pumping up inflatable dinghies. It comes in a palm-sized, plastic housing with a squeeze grip on/off switch, 10 feet of power cable, and good-sized alligator clips for connection to a battery. The kit includes five nozzles and four adaptors that seemed to go together nicely and fit most of our dinghies.

The instruction book is written in seven languages and includes charts and diagrams to help users figure out which valve types and nozzles match which inflatable dinghy (most of which are European). The nozzles fit snugly without air leakage, and the pump fills all the compartments quickly.

The Rule was the noisiest pump tested, measuring 110 decibels in our tests, but it runs at high velocity and puts out a substantial airflow, 20 cubic feet per minute (CFM), with an adequate pressure of 2.6 to 3 psi. Rule rates it at 80-90 decibels.

Bottom Line: This is a small, handy, well-built pump that will inflate an average size dinghy quickly. Its a natural addition to Rules line of marine accessories. It gets Best Choice nod.

The Bravo 12 inflator/deflator is a powerful compressor pump that draws about 9 amps and pushes 5.3 CFM with the adjustable pressure set at 4.4 psi. One feature testers particularly liked was that once the selected pressure is reached, the pump automatically stops.

The kit includes a 5-foot air hose, three adaptors, and eight nozzles, but testers found that several of the nozzles did not fit the hose and adaptors. The 6-foot power cord with battery clips is stored in a compartment under the pump, but once the cord is extended, Practical Sailor testers found it impossible to restore it in the compartment.

The Bravo pump has four spring feet, and when turned on, the pump screams at 105 decibels, vibrates, and literally dances around on those feet. The manufacturer warns to not run the pump for more than 15 minutes and to allow for a 30-minute cool down after use. The website suggests using one of their larger pumps for inflatables over 9 feet. The Bravo has a two-year manufacturer warranty.

Bottom Line: The Bravo 12 puts out a high volume of air at reasonable pressure, and testers liked its automatic cut-off. However, the units excessive vibration made us feel as if it was about to self-destruct, and testers found it cumbersome to use.

West Marines 12-volt inflator/deflator (No. 5374111) is a quality, inexpensive, general-purpose device. It comes with a 10-foot power cord with a cigarette lighter plug and an adaptor with battery clips.

The kit lacked the variety of nozzles and valve adaptors that the other test kits came with. The supplied West Marine nozzles fit a few of the dinghies, but allowed air to leak on most all others. It runs at 95 decibels (measured from 1 foot away), with an airflow of 11.9 CFM, and maximum pressure of 1.15 psi. West Marine does offer additional nozzles for purchase.

Bottom Line: For $40, the West Marine is a decent small pump, but the lower velocity and pressure, and ill-fitting nozzles slowed us down. It still earns the Budget Buy, but youll want to be sure to get the right adaptor and nozzle for your boat.

Of the four inflators we tested, the West Marine is a bargain and the Rule was our favorite, although it was the loudest and drew the most current.