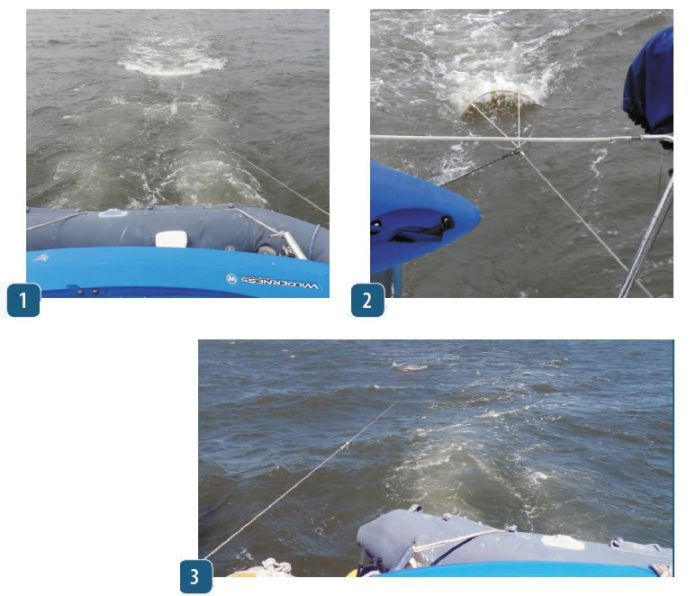 We did not test every drogue that appears in the accompanying table, PS Value Guide: Drogues. However, we collected a huge amount of test data and observations from model testing and from multiple sources, including Victor Shanes Drag Device Database (www.dragdevicedb.com), and incorporated these into our test findings.

Our testing at various boat speeds with both full-size drogues and smaller-scale models gave us a solid basis for estimating performance at higher speeds and with larger size drogues. It is important to note that the models were used to build our understanding and to explore high speed and high load behavior, but they were not used in anyway to build the data table or to grade performance.

It should also be noted that drag data shows considerable variation due to wave action, rode length, yawing, and turbulent effects, and even after averaging results, the data can be quite variable. One can expect that data collected by two independent studies, carrying out the same protocol, might vary by as much as 30 percent.

In the Value Guide table, our Best Choice and Recommended ratings are based upon durable construction, stable performance, and observations from actual use. Drag does not enter into our ratings since more drag is not necessarily better, just as a large shoe isn’t necessarily better than a small shoe. Every manufacturer makes a range of drogue sizes; pick the one that fits your boat and intended use.

The first phase in our test was steady-state testing. Each drogue was weighted with 8 feet of 5/16-inch chain. This is less weight than recommended, but the test conditions were below gale force, and our intention was to induce, or at least observe, surfacing behavior. We then attached each drogue to a load cell with a 100-foot polyester, double-braid (half-inch) rode. The load cell allowed us to estimate relative drift rates and establish a base load at a given speed.

We towed each of the drag devices behind our test boat at various speeds, recording forces and plotting force versus speed. We also collected data from other investigations into drogue units that were not in our test, as well as those that we did test. This data was averaged with our own.

After a round of testing with 100-foot tow rodes, we repeated the testing with 50-foot rodes. Although most manufacturers suggest 350-feet tow lines, the shorter rode allowed us to observe which drogues might be prone to pulling out of a following wave.

A drogues ability to resist being pulled out of a following wave is a critical feature. For this reason, we were most interested in determining how deeply each drogue runs and how each one behaves near the surface.