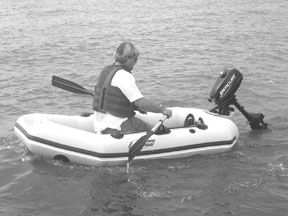 It’s been about a year since we last buzzed around in blow-up boats. In that May 1, ’04 article, our focus was on airdeck roll-up boats, which use inflated parts to create V-shaped bottoms that mimic those of hard-bottomed inflatables. What they lack in toughness and rigidity, they make up for in lightness and portability, and they’re superior to their flat-bottomed cousins in tracking and turning ability. Our favorite boat in those tests was the Zodiac Cadet 310FR ACTI-V.

There are plenty of variations in inflatables, but in terms of performance, the main difference is in bottom shape and how it’s achieved. True hard-bottomed inflatables, or RIBs (for rigid inflatable boats) typically have fiberglass or aluminum V-shaped hulls, and, because of their shape and form stability, are generally the best for handling and performance. They’re also the least portable and most expensive. But for anyone who needs an inflatable larger than 10 feet LOA, with speed, the ability to handle chop, and the capacity to remain in the water long-term, these are the obvious choice.

In soft-bottomed boats, there are several versions; including the air- deck boats mentioned above. There are also boats with hard floorboards and various inflatable components to shape the bottom. Finally, there are the tried-and-true flat-bottomed boats, which have the longest history in service of all inflatables.

Airdeck boats remain our overall preference for tenders that need to be deflated and stowed regularly. For minimum-sized, engine-capable boats, however, there are strong arguments that favor their flat-bottomed cousins, the kind with floorboards that can either be removed or folded or rolled up along with the inflatable chambers.

What are the advantages here? First, price. Standard flat-bottomed inflatables are the cheapest of these three main types. The boats in this article are much less expensive than the airdeck boats we reviewed last year. Second, most of them are a bit easier and faster to inflate and deflate, assemble and disassemble, than the airdecks. Third, they’re arguably less prone to expensive damage, since their bottoms are basically just fabric under floorboards, not complex chambers that can be punctured. And, depending on which parts get damaged, they’re easier to repair.

There are disadvantages, of course, in the tracking and steering departments. These smalller boats will tend to skate sideways under power more easily than RIBs or airdecks, and they’re more skittery in wind and waves. Like the airdecks, they’ll row fine in flat water and no breeze. Add breeze, and the V-shaped bottoms will fare better.

Unfortunately, the rowing performance of almost all inflatables is undercut by the stubby, inefficient oars with which they’re equipped—part of the price for lightness and portability. It’s hard to say whether the flat-bottomed boats are wetter in a chop, since minor variations in wind and wave can make almost any dinghy that was dry one minute take spray over the bow the next.

Most important, though, basic flat-bottomed inflatables are a good alternative for that segment of the boating population that uses blow-up boats almost exclusively for operation in sheltered waters, whether it’s hauling people, gear, and groceries out to the mother ship, or exploring a new harbor before sunset. Harbor tenders don’t have much asked of them most of the time. That isn’t to say, of course, that during the times when you’re facing a 25-knot headwind and pelting rain on the way out to the mooring, you wouldn’t wish for a more capable platform. These boats involve trade-offs, just like all the others.

What We Tested
Even in flat-bottomed blow-ups, there are a lot of choices. The best way to divvy up the lot is by price. This review sticks to boats under $1,000, and all are under 7′ 6″. These boats are basic transportation—small, light, easily stowed, easily inflated and deflated, and inexpensive.

Four of the six had integral solid wooden transoms. The two others—one from Bombard the other from Achilles—are soft all the way around and use detachable motor brackets for mounting engines. Both exhibited a fair amount of flex in this service, which may be an inflation issue, although we did inflate all the boats to their manufacturers’ specs.

How We Tested
Flat-bottomed inflatables really aren’t meant for high-speed maneuvering (although they can sometimes go fast in a straight line). So we decided to evaluate them according to price, ease of inflation/deflation, weight/stowability, rider comfort, stability and steering—both when rowing and being pushed by a small outboard.

Using a powerboat as our test base, we came up alongside each boat while underway to rate low-speed maneuverabilty.

We also looked at fit-and-finish (in particular floorboard/slat arrangements), fittings and hardware, standard equipment, and warranties. For an engine, we used a 3.3-hp Mercury two-stroke, weighing 29 lbs. with an integral fuel tank. An engine this size can easily be mounted and demounted in minutes by a person of moderate strength. It would mainly be used to push the boat around with a small crew or gear and grocery bags.

What We Found
All of the boats were easy to assemble and disassemble. The only boat we had a bit of difficulty with was the Zodiac C200. We found the two aft wooden slats difficult to get into their PVC slots.

Each boat comes in a carrying bag. The Zodiac boats and the Mercury boat have side handles and the bags are vented. The Achilles has no handles, and the bag is canvas, which adds to the weight.

Like all boats, these super-small inflatables have pluses and minuses, depending on their design and construction. For instance, the boats with larger tubes will run dryer, but those tubes eat up valuable interior space. The smaller-tubed boats are wetter, but have more space inside. Since these boats are so stubby (the longest—the Bombard AX-Dinghy and Achilles LT-2—both have LOAs of 7′ 3″), they are hard to steer at slow speeds. Unfortunately, that’s where you’ll be spending most of your time—especially if you have two people in the boat. The boats that were more easily controlled at lower speeds garnered greater overall scores. (You have to be very careful if you do shuttle around two people. The boats are low to the water, meaning even smaller waves can soak the boat’s occupants.)

Rowing is not fun on these boats, either. We prefer the boats with the wooden seats rather than the inflated thwarts, which can easily blow away. We also prefer rowing systems that allow you to feather the oars, and slide them outboard and inboard with relative ease.

All of the boats have slatted floors. The slats are uncomfortable against your body, particularly while kneeling. Stuff can get caught around the ends of the slats, too. The portable seat cushion we used during testing got tangled on more than one boat. The other issue is that open-toed shoes can get caught under the slats. Nonetheless, all the boats we tested appeared to be well constructed.

Conclusions
The Mercury RU 200 is our top pick because it’s stable and dry—and it’s the least expensive in our group. You also get a lot for your money with the Bombard AX-1, but it’s slightly wetter than the Mercury, so it is our runner-up.

The soft-transom boats are really rowing dinghies. Bombard’s AX-Dinghy’s oars can be feathered, but it has a blow-up seat. And Achilles’ LT-2’s oars can’t be feathered, but we prefer its wooden seat. It’s also $122 less than the Bombard, and its flat floor is easier on the knees and other body parts. Therefore, we’d take it over the Bombard.

Also With This Article
“Pictures, Fast Facts, and Other Boat Details”