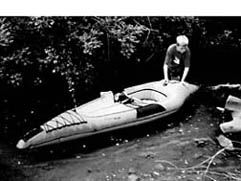 About a year ago, Stearns Inc., best known as a maker of life jackets, introduced an inflatable kayak, offered in one- and two-person models. The major discount retailers—West Marine, BoatU.S. and Defender Industries—have picked them up. And we’ve seen them in non-marine chain stores such as the Sports Authority. When Stearns called to ask if we’d like to test one, we were initially skeptical—what sort of quality can one expect for a boat that sells for just less than $300, and how well can an inflatable kayak perform? The answer to both questions, we assumed, was “poor.”

On opening the box we were pleasantly surprised by the heaviness of the fabric—840 denier nylon. The air chambers are PVC. There is a zippered spray skirt to keep your legs dry; mesh bags for personal gear; watertight map storage; bungee cord across bow, and carrying handles.

There are three air chambers with Boston valves. Two chambers form the hull while the third is the inflatable floor. The one-person model measures 9′ 8″ long and 3′ 1″ wide, and so does not take a lot of strokes to inflate. We did have a slight problem with the nylon outer cover slipping over one of the valves, which later made it difficult to unscrew and deflate. The instructions suggest partially inflating the chambers and making sure the valve access holes are properly positioned before finishing inflation.

At less than 30 lbs., the kayak is easy to transport from, say, your car trunk to the water.

Unless you’re a kid or quite small, you’ll probably need to unzip the spray skirt to get your legs into the boat. And if you’re much over 6 feet, you may not be able to fully extend your legs. If you can’t, you’ll have to bend them at the knees, but that means unzipping the spray skirt, which is self-defeating.

To help the Stearns kayak track, there is a molded runner on the bottom and tracking fins bow and stern. We compared its performance to several rigid, more expensive kayaks and found its performance predictable and acceptable. While it doesn’t track like a quality rigid kayak, it does better than one might expect, with the bow moving port and starboard just a few inches with each stroke.

A pair of inflatable kayaks could be carried aboard a cruising sailboat taking minimal space—roughly 7″ x 20″ x 27″ each…unless you can do a better job than we of folding and cramming it back into its valise. One would also be ideal for getting out to a moored boat when it is not possible to leave a dinghy on the beach.

Overall, we thought the Stearns inflatable kayak, made in China, is a clever design, well-executed and reasonably priced. In fact, we had a lot of fun with our demo, carrying it around in the trunk of the car waiting for those occasions of whimsy when the placid and beckoning waters of the bay cannot be resisted. (Stearns Inc., PO Box 1498, St. Cloud, MN 56302; 320/252-1642.)