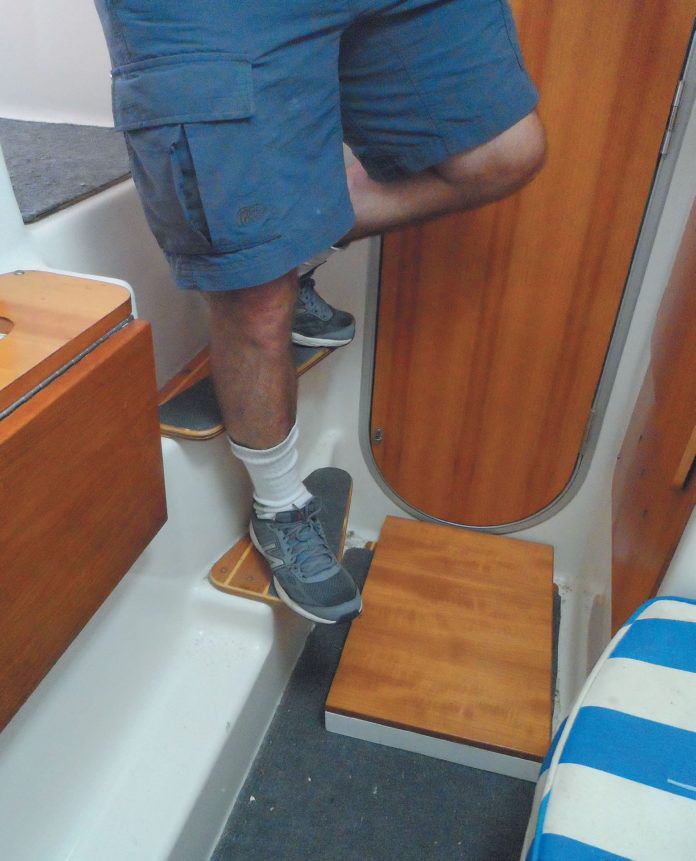 Slips and falls will probably always be the greatest hazard on a sailboat, whether the result is a trip over the side, a knee slammed into the deckhouse, or a tumble down the companionway.

In previous reports, Practical Sailor has reviewed paints and glue-on mats for restoring large areas of decks. Weve also looked at ways to make your own non-skid varnish (see Finishing the Cabin Sole, PS Advisor, PS July 2015) but what about those areas that you need to fix right away? Wouldnt textured non-skid tape, or grit-infused tape sold at the chandlery or hardware store serve well?

In fact, there is a place for the simplicity of adhesive tapes, since many new boat owners are reluctant to start prepping for paint when only a few small areas require improvement.

Our test boat had several areas around the deck hatches with slick spots that lacked textured gelcoat. Textured vinyl tape was a permanent solution.

The hatches themselves are slick as well, but we chose not to add grip tape there. Encouraging regular use as a walking surface seemed like a bad idea. (Why don’t chandleries carry no-step stickers?) We found the same grip tape to be handy for several applications in the cabin, dock, and cockpit.

Another valuable application has been deck protection.

Chain guard. Every time the anchor is hauled, the chain grinds across the deck before the windlass. The prior owner avoided damage by keeping a towel under the chain and by staying in marinas.

Our solution was a layer of vinyl tape, which endured about 400 anchoring cycles before showing noticeable wear. Yes, we could have glued a permanent guard, but an easily reversible fix is often a smart way to solve new problems, especially when the boat is new to you. A decade later it took only five minutes to replace.

Scuffs. Winch handles are constantly leaving black stripes in the cockpit, as knees and hips slam them into the gelcoat. A nearly invisible pad of tape lasts more than a decade.

The best brand? Weve used Life Safe and Seafit textured vinyl, and occasionally use hardware store brands. We never noticed a big difference in wear, although the Seafit seemed to adhere better over the course of time.

Although the non-skid on the deck was grippy enough, the edges of steps and a few steep areas needed improvement. Vinyl tape was of little use in these places, since it offers no better grip than the existing textured gelcoat.

Yes, you can lose some skin if you slide on grip tape, but a scrape is far better than slipping and falling. If you do slide, because the course grit media is cutting into the sole of your shoe, the loss of traction is not as sudden and complete as it is with textured gelcoat. You slide at a controlled rate, rather than instantly slipping loose. Grip tape is used on skateboards for this reason.

Steep areas. A few slopes on the sides of the cabin are in the 30-45 degree range; just shallow enough to invite the occasional misstep, yet steep enough that without non-skid a misstep would result and a sudden, and potentially serious fall. On the test boat these areas were finished in black gelcoat. We neatly overlaid them with black grit-infused tape. Problem solved.

A common complaint about grit-infused tape is that it is uncomfortable for bare feet. There are varying levels of courseness available, and you can find the one that best suits your comfort and needs. We tested the fine to medium grits and felt no discomfort with bare feet. Tapes recommended for swimming pool steps are usually kind to bare feet.

The best brand? We used 3M Safety Walk on the test boat and a house brand (Uline) of abrasive tape on a sister boat. The Uline tape shed more grit, although it still held up for years. We also have used both brands in industrial settings. But because of its durability, the 3M Safety Walk is our Best Choice.

Ease of replacement is quite reasonable, as long as you remove the tape within 10 years, before the adhesive turns hard. We have just replaced many of these patches, ranging from 8-10 years old, and all remained in functional condition.

Those sections that see light traffic may have another decade remaining.

Certainly there are more durable options out there, but they are not easy for the DIY sailor. In our view, self-adhesive non-skid tape is a winner for small problem areas.

Non-Skid Tapes
A Quick and Easy Fix for Slippery Steps

We’ve been using grip tapes throughout one of our test boats for nearly a decade. Tape in the heavily trafficked areas wore thin, but none required special measures to remove and replace. A few of the more worn tapes would tear when we tried to pull them up, but inserting the blade would always get them started again. After a few minutes of wiping with xylene and scraping to remove the adhesive residue, we were ready to apply fresh tape. For scraping, a knife works well on smooth gelcoat, and an expired credit card lifts non-skid and its residue around curves.

1. Step edges are the first place to get slick, and a contrasting tape makes them easier to see.
2. The test boat had a few 30-45 degree slopes that had proven treacherous. Grit tape that nearly matched the black gelcoat solved the problem.
3. Vinyl grip tape can also protect areas that see frequent abrasion .
4. Teak is a natural non-skid, but for steps, more texture is often needed. One way to test the surface is to see how confident you are in socks.