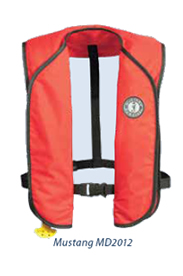 In the wake of “repeated product failures,” Orion Safety Products has instituted a replacement program for older XLT flares and 12-gauge signal systems that some boaters may still have in their emergency kits. According to the company, some XLT and 12-gauge signals made before October 2008—when the designs were revamped—have failed to launch or to ignite.

XLTs are self-contained, hand-launched signals, and the 12-gauge systems comprise a pistol-style launcher and a plastic shell; the latter are found in a variety of Orion signal kits. In 2008, Orion switched from manufacturing these using orange ABS plastic to red glass-filled polypropylene because it offered better strength and more moisture resistance. The ABS flares are the ones that are failing and are the subject of the product replacement program.

Although these older distress signals are reaching—or have reached—their expiration dates (December 2011 for the ABS XLTs and March 2012 for the ABS 12-gauge shells), Orion is replacing those unexpired flares that consumers still have so that there’s no chance a flare may fail in an emergency situation. The company is also making an effort to notify consumers about the situation so that anyone who may have expired ABS flares in a backup kit can properly dispose of them rather than holding on to potentially faulty products. The U.S. Coast Guard and many media outlets have been notified.

If you have Orion handheld XLT flares or 12-gauge shells, be sure to check them to see whether they are part of this replacement program. The affected XLT flares have an orange launch tube (not red), and the affected 12-gauge shells are orange all over (not red). First, check the expiration date: If an XLT flare’s expiration falls between November 2011 and December 2011, it should be properly disposed of and Orion will send you a replacement four-pack of polypropylene XLTs. If a 12-gauge shell’s expiration falls between November 2011 and March 2012, it too should be disposed of and you are due a replacement four pack.

Note that this is not a recall. The company is not asking consumers to send in the potentially defective products; mailing flares is illegal and can be quite dangerous. Orion is only committing to replacing the flares with the new, improved versions.

“The public cannot legally ship their signals to us, and we are simply sending them replacements for what they have,” explained Orion plant manager Rod Utter.

For info on what to do with potentially faulty flares, see “Disposing of Expired Flares” in the December 2011 issue.

Mustang Survival (www.mustangsurvival.com) is voluntarily recalling all of its MD2010 and MD2012 inflatable personal flotation devices (PFDs) sold in the United States in 2011. According to Mustang, a problem with the inflator installation may prevent some PFDs from fully inflating to the designed 22 pounds of buoyancy. However, the company said that a simple repair process will fix the flaw.

Recalled products should be returned to Mustang directly—not to where they were purchased—as only the Mustang factory is authorized to carry out the necessary repair.

To determine whether you have a recalled PFD, take a look at the product’s labeling on the inside of the vest. If the PFD has white safety labels sewn on or has an M.I.T. (Membrane Inflatable Technology) stamp above the CO2 cylinders, then it is OK. However, if it lacks both of these and is a model MD2010 or MD2012 (which look identical), then it should be returned to Mustang for repair. Mustang Survival will pay for all testing, repair, and shipping costs, but the estimated return time on an affected product is three to four weeks.