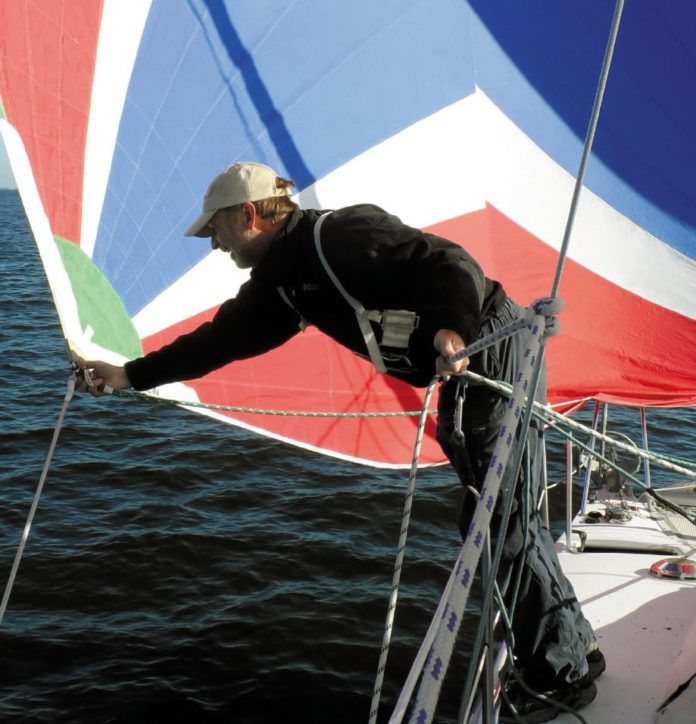 Lifelines are often disparaged as nothing more than tripping hazards, mounted so far below our center of gravity that they are more likely to launch a sailor over the side than to save him. While larger boats occasionally fit taller stanchions and solid-tube railings, the vast majority follow the International Sailing Federations (ISAF) offshore regulations, which require lifelines to be no less than 24 inches high on boats 28 feet or longer. This is effectively the bare minimum developed for racing on fully crewed boats where higher lines interfere with deck-sweeping genoas, and crew lost overboard has a reasonable hope for recovery. Cruisers have different priorities.

When boats were made of wood and men of iron, it was common practice to rig safety lines at chest height during storms. Shrouds for multiple masts were mounted outboard, like a row of tall stanchions reaching to the sky, providing handy attachment points the length of the ship, with vertical runners attached as needed to limit the gaps. Many long-distance cruisers do the same on passage, gaining much needed security during one-man watches.

For chest-high lifelines, polyester double braid is typically the line of choice, offering both good hand and low stretch. The ends are secured to strong points, fore and aft, either at the pulpit or deck, shrouds and arches, and other high points. Yawls and ketches make rigging a high lifeline easier as the second pair of shrouds provides additional rigging points.

Chest-high lifelines would seem to be overkill for the average coastal sailor. After all, there are jacklines for offshore work, and overnight passages are few. But jacklines have their limitations. They are cumbersome, and in calm weather, one is easily tempted to forego clipping-in. Lets not forget that many man-overboard fatalities occur in relatively benign conditions.

Looking at todays cruising boat designs, it is easy to see how the typical 24-inch-high lifeline offers little security. The cabintop height on a contemporary deck-saloon cruiser or catamaran is often greater than 24 inches above the sidedeck. One sweep of the boom or a lurch in a cross-sea, and a person standing on the cabintop could be easily launched right over the lifeline. This mid-ship area between the cockpit and foredeck is a logical place for a chest-high lifeline. Fortunately, on many boats. it is also an easy place to rig such a lifeline.

For our chest-high lifeline, we chose a retired genoa sheet made of Kevlar. Kevlar, because it has almost no stretch and is relatively soft, seemed like a logical choice. We anchored the forward end to the aft end of a bow gate (there is an eye in the lifeline). The center of the line was tied to the shroud with a clove hitch; the aft end was secured to a gate eye at the stern with a lashing. Keep in mind that all lifeline gates need to be closed in order for the lifeline to retain full strength.

We had considered seizing the line to the shroud with some whipping twine, but the clove hitch turned out to be sufficient. We secured it with a bit of tape wrapped around the shroud, just below the hitch. Weve been using it like this for over a year and have not yet had any problems with it sliding. Dont try this with Amsteel or other Dyneema lines. Although these are popular materials for lifelines, they are slippery and will likely slide down the shroud under load when rigged high.

An alternative is to use a jackline fairlead. C.S. Johnson makes one that is described below. You can also seize a grommet or D-ring to the stanchion. Obviously, this arrangement is best suited for boats with outboard shrouds.

ISAF rules governing lifelines sizing vary with boat size, requiring 3/16-inch, stainless-steel cable with a tensile strength of about 3,700 pounds for a 43-foot boat. End points must be anchored to either a reinforced pulpit or deck anchors. Does this extra line add any new stresses to already weak stanchions? We don’t think so.

ISAF rules require lifelines to be supported every 84 inches. While this is not practical, we did loosely lash the new chest-high lifeline to the top lifeline where it passed close; the longest unsupported section is only 105 inches, which complies with the spirit of the rule. ISAF rules also require that no lifeline be attached to a stanchion. This is so that tension loads are transmitted to strong points at the pulpit and stern rail. We did this by terminating the high lifeline at existing lifeline eyes, not wanting to block the gates; the line could as easily be run to the ends or brought down to a stanchion base or other deck strong point.

What about attachment to shrouds? Because of the tightrope effect, a good strong pull in the center may create tension forces up to 1,000 pounds; on shrouds greater than a quarter-inch in diameter, this is insignificant and can be ignored.

On smaller boats, however, there will be considerable deflection, but not enough for rare occurrences to be any greater concern than falling against a shroud. We like that the clove hitch is easy on the wire, contributing to neither point-loading, fatigue, or corrosion. It is important to make sure that your shrouds have toggles that allow for this kind of flex.

If a clove hitch or seizing does not suit your tastes for securing a high lifeline, there are a few bolt-on products available.

The C.S. Johnson stainless jackline fairlead is designed for jacklines and is suitable for clamping to wire, rod, or Dynaform shrouds from 5/6- to half-inch. The price isn’t cheap: $135 each. A high lifeline threaded through such a fitting would comply with the ISAF requirement that the line not be fixed at any intermediate point. Though we did not test the fairlead, Johnson said it is designed so that it will not chafe the wires. Each fairlead cleat comes with the required shims. As for its intended purpose-jacklines-we prefer jacklines that are centered further inboard to keep a person from going overboard.

Bottom line: This solution looks slick, but there are less expensive alternatives.

Moonlight Marines Aladdin Cleats are named for their resemblance to the mythical lamp. Although they are recommended for securing sail and flag halyards, weve seen them used to secure high lifelines. The price is right-$22-but in our view, they arent a good idea to use on shrouds. They can catch sheets, and they appear lightly built for this application.

Bottom line: Wed rather use a clove hitch.

Chest-high lifelines don’t get in the way of any running rigging, and they actually ease tacking, lifting the lazy sheet at a better angle. And when we do go forward without clipping or reach to leeward for a sail clew, we feel a lot less naked. If you rig your own setup, be sure to test it gently at first, slowly increasing your weight on it. The line is only as secure as the connections.

A chest-high lifeline project is as simple as they come. Measure for length; eye-splice or knot a bight in the ends; hitch or lash the line to your shrouds at the desired height; lash the ends to your existing lifelines or corner stanchion; and tension.

1.A wrap of tape around the lifeline prevents the hitch from sliding.
2. Dacron lashing (with chafe gear) can be tensioned.
3. The orange line is the new, high lifeline on our test cat.