Driven by World Sailing standards, the sailing tether market is dominated by single 6-foot tethers and two-leg 3-foot/6-foot tethers. In fact, if you intend to race your boat in a World Sailing event, you will have to choose one of these tethers to be compliant with race rules.

Whether one leg or two legs is preferable is open to debate. The advantage of a double-leg tether is that you can be continuously clipped in as you move between clip-in points. Many sailors, however, see the second leg as a complication. Some have even gone so far as to cut the second leg away after finding it to be too much of a nuisance.

The nice thing about making your own tether is that you can determine the length and configuration that best meets your needs. PS tester Drew Frye, who carried out the testing for the adjacent article, prefers the two leg variety. For the short leg, he has found that a short, 2-foot tether, is particularly handy when working near the bow (where a long tether would increase the risk of getting hurled forward) standing at the mast, or the moving forward, sliding past the hardtop.

The longer leg also goes against convention. It is a full eight feet, allowing Frye to work nearly the full width of his cruising catamaran. To manage the extra length, he keeps the harness high on the chest and in part by holding the tether in one hand as he moves across the cockpit or bow.

When working in a vulnerable position, like down on the sugar scoops transom while landing a fish, he extends the tether from end to end, a full 10 feet. In Frye’s view, tethers should fit the boat, and that perhaps a too long tether is the greatest risk of all.

Determining the right length tether is tough if the boat’s jacklines run on the side decks, outside the shrouds. This common setup puts the crew in a vulnerable position. Jacklines should run inside the shrouds and near the centerline when possible. See “Jackline Installation Advice,” PS November 2015. 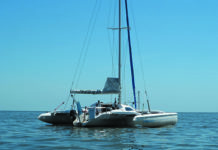 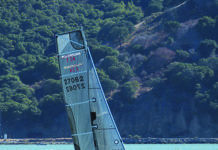 Making the Most of Centerboards 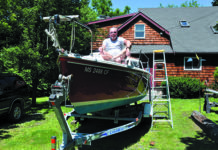