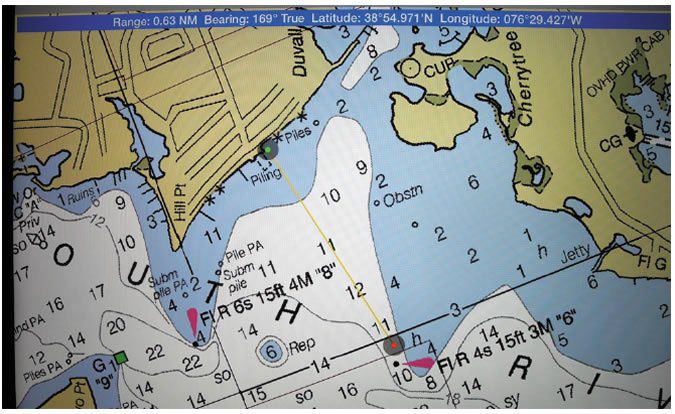 Practical Sailors testing of man-overboard lights involved both lab and on-the-water testing. Our main interest was each lights brightness (radiance), but we also wanted to see how strobe patterns might hasten or delay the recovery of a man overboard.

Using a Gossen LunaPro-F light meter/flash meter, we measured the light output intensity (radiance) of each unit and compared the readings with the manufacturers brightness statistics (lumens and candela ratings). We also created high-speed digital photos of single-flash cycles in order to measure the flash period. By manually setting the exposure, we had another valid measure of light output.

We also carried out two on-the-water evaluations. The first was a visual comparison of the lights at a distance of .62 nautical miles. We kept the elevation of the personal MOB lights at one foot above sea-level and the height of eye of the observer at six feet. Intentionally, we chose a moonless night sky, and the location was in a coastal area with a significant number of onshore lights that made it challenging to spot these relatively small lights.

In the second phase of our on-the-water field testing, we had a volunteer victim display two lights at a time in a round-robin context, at a pre-measured distance of 100 yards. This direct comparison resulted in an apparent brightness ranking that was compared with the distance evaluation described above. This also gave us a chance to observe any influence the light intensity and flash-cycle duration (both of which were later measured with bench testing) had on visibility.

For bench testing, we used the Gossen flash meter/light meter to measure the strobe, blink, and constant-on illumination of each of the different lights.

The manufacturers report light output in various ways. Some use candlepower (candela), a measure of radiance at the source, while others used foot candles or lumens as a measure of the illumination of an object at a specific distance. To add further complication to the fray, each light had a unique span of on time, and the nature of this strobe effect varied greatly. For example, our measurement of peak radiance at the head of the two ACR Firefly Waterbug strobes (one a xenon tube and the other an LED) was quite similar, but the on-the-water and in-the-water testing revealed that the Firefly Pro Waterbug LED (in strobe mode) was a distinctly more noticeable light. To answer the question why, we used high-rate digital photography to freeze-frame the light cycle and discovered that in strobe mode, the new LED Firefly Pro actually remained lit during each illumination four to five times longer than the older xenon version, the Firefly3 Waterbug.

The rankings for each of the products in the various categories we evaluated appear in the accompanying Value Guide table.