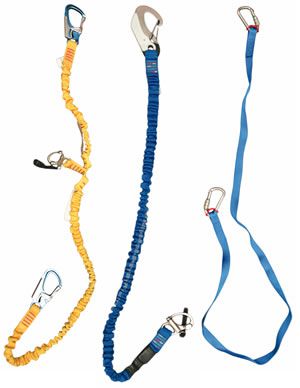 Once you’ve settled on the types of clips you want on your tether, the next choice is the webbing construction. Currently, there are two main types of tethers: single tethers with one hook at each end; or double tethers, with two legs and three hooks. Double tethers have an extra clip, usually attached to a short leg at the mid-point of the tether, that shortens the length to about 3 feet.

Most tether makers offer both single and double tethers, and, in the past, we’ve generally recommended the double tethers. Several active offshore cruisers say they prefer the single tethers, because the third leg, in their opinion, tends to interfere with moving about on deck. Some sailors will shorten up the single tether by looping it under the jackline, although not without some risk of: 1) the tether chafing; 2) being unable to release quickly.

Since the mid-1990s makers have also begun offering elasticized tethers, which reduce the length of the tether by about 50 percent when it is not under load. We’ve received several reports from readers that the elastic in these tethers lose their elasticity after a few years. One set of our three West Marine tethers has lost most of its spring. Readers Garry and Leslie Schnieder sent us samples of the elastic from a three-year-old Wichard elastic tether that had lost its elasticity as well. The thinly woven gauze had about as much stretch as a 10-year-old pair of underwear.

Bottom line: We recommend the double-leg elastic tethers, but buyers should be aware of their shortcomings.