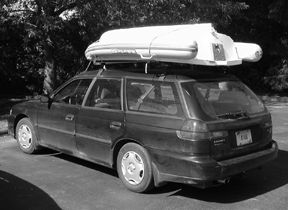 Back in the September 2001 issue, Practical Sailor reviewed, in the Chandlery section, the Walker Bay 8 and Walker Bay 10 dinghies. We chose that location in the magazine because it seemed to us, and still does, that these mass-produced, mass-marketed boats are bought and sold in a different way than dinghies and tenders and sailing prams have been in the past. They are positioned in West Marine and other chandleries almost as impulse buys, and over the years they’ve spread across the country and the world.

What we hadn’t expected was that the Walker Bay boats would be so capable in the main roles that would be expected of them—rowing, towing, and sailing. Their hulls forms, particularly that of the 8-footer, are well thought-out—broad in the beam, tapering to a narrower transom aft, and quite fine at the bow. Molded strakes add some extra longitudinal stiffness in the injection-molded polypropylene hull, and a molded skeg runs the length of the bottom and helps tracking and stability. The thin but nearly indestructible hull is completely fortified by the thwarts, which are through-bolted into the hull sides. (In the 10-footer we experienced a bit of oil-canning in the sections between the middle thwart and the bow—nothing to threaten the structure, but an indication of how thin the polypro is in the bottom.

The fineness at the bow means the boats can function properly in the water—the boats are actually a pleasure to row, given a good pair of oars, and they tow straight and light. But that fineness forward has also meant a lack of stability when weight is moved into the skinny part without being balanced aft. This means that people and gear occasionally fall into the drink, especially when loading or unloading alongside a boat or a dock. In the past, this was just accepted when you had a dinghy shaped like this—not just Walker Bay’s, but anyone’s.

With so many boats out there, it seems inevitable that Walker Bay might receive complaints about stability. In our view, such complaints aren’t really justified, but we imagine they got some anyway. And their response (if it was in fact at least partly in response to complaints) was quite simple: They put inflatable tubes around the boats, and called the new versions the Walker Bay 9 and Walker Bay 11 RIDs (Rigid Inflatable Dinghy).

This past summer they disseminated these RIDs to the editorial offices of sailing and boating magazines all over the place.

What We Found
When we got our copy of the Walker Bay RID 9, we assembled it in an hour or so, the same as last time. The only real difference we found was the grooved tracks fastened to the hullsides under the gunwales. Into these tracks you insert the “boltropes” of the deflated V-shaped tube, and pull the sides of the tube aft. We had a bit of a wrestling match with ours—it would have gone easily if we’d put some soapy water in the grooves first, but we were soapless at the time.

The tube is made of UV-resistant 1,100-decitex PVC. (Decitex is a measurement of cloth weight in grams, used in the metric system. The equivalent to 1,100 decitex is about 1,000 denier.) Hypalon fabric will be available on all 2004 boats (shipping now).

After the tube was in place, we blew it up easily with the supplied bellows foot pump, then threw the boat on top of a car, drove it elsewhere, leaned it against a garage with the bow up, resting on the butts of the tube—and left it there for the better part of the summer. (It was a busy summer.) When we finally had a chance to put it in the water, the tube had deflated slightly – it took about five strokes of the foot pump per side to get it completely firm again, the work of 30 seconds, and then we carried the boat to the water. Here we found our only disappointment: Unlike the tubeless Walker Bay 8, which can be toted on the back of one person, turtleshell-like, the added length of the tubes at the aft end of the 9-foot RID makes it ungainly for one person to carry. With a partner, we found that the best way to carry the boat more than a few yards is to shoulder the tubes amidships. It’s very comfortable that way.

In the water, there were no surprises. Now the boat is stable all the way around. We walked all over it, rocked it, and got a feel for its limits. Then we rowed it, and then powered it with a 4-hp. outboard. Rowing is as it was before—nice, especially with the Hydro-curve oars shipped with the boat. These are made by Walker Bay with wooden shafts and slightly cupped plastic snap-in blades.

With the outboard, the boat rides way down by the stern with one person aboard. We had to lean well forward, and even then the ride wasn’t well-balanced. Walker Bay recommends using a tiller extension for single-person operation—in fact it shows such an arrangement on the capacity plaque on the transom. With another person or a load of groceries or water forward, things would be better.

There really is no downside (at least that we can see) to the addition of these tubes, except that they will create drag when the boat is sailing heeled over, and when being rowed or powered in some choppy conditions. We didn’t test the sailing rig this time around (refer to the September 2001 issue for a report of sailing characteristics), but in any case these boats should be sailed close to upright.

The tubes do add a lot of stability —the boats can even be boarded over the side by swimmers. They also add buoyancy in case of overload or capsize. And, with the built-in fendering, they make side-by-side relations with the mother ship even kinder and gentler than before.

When Walker Bay sent these boats around to magazine editors, they offered a couple of options for disposing of the boats after testing: “1. Walker Bay will give you the boat to use in a promotional giveaway through your publication. 2. Anyone at the magazine may buy the test boat at a one time promotional offer of 50% off the retail price.”

We didn’t feel as if we could take Walker Bay up on either of these kind offers, lest we be thought beholden, so we arranged with Walker Bay to have the boat delivered to a local dealer. We’ll miss it, though.