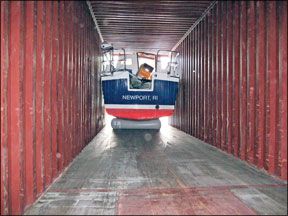 Take an International 110, stretch it out to 39 feet, give it a cambered deck, raised pilothouse, and the interior comforts of a couples cruising boat, and youll have a snapshot of what Container Yachts Far Harbour 39 looks—and in many respects—sails like. If you want a cruising boat that can be boxed and shipped, then the Far Harbour 39 box boat is worth considering. If youre not planning to use your boat this way, then save your $250,000 for a boat that has fewer compromises for the sake of shipping dimensions.

Take an International 110, stretch it out to 39 feet, give it a cambered deck, raised pilothouse, and the comforts of a couples cruising boat, and youll have an idea of what Container Yachts Far Harbour 39 looks—and in many respects—sails like.

Legendary designer Ray Hunts narrow, boxy, hard-chined 110 might be one of the oddest looking small boats racing today, but its continued popularity since its introduction in 1939 is in no small part due to its on-the-water performance. The needle-like 110, with its ballasted fin keel, hard chine, and low wetted surface embodied a design philosophy that persists today as far up as the Americas Cup boats: Narrow and sleek is fast.

“There really isn’t any other boat like this,” says Bob Perry, designer of the Far Harbour 39. “But if I had to pick a boat that it coms closest to, Id say it is the 110, which is the ultimate box boat.”

Box is the operative word with regards to the Far Harbour. The boats primary mission is to be a capable cruiser that can fit into a common shipping container (interior dimensions, 39 feet, 5 inches x 7 feet, 8 inches x 7 feet, 9 inches). This allows the boat to be shipped anywhere in the world served by cargo carriers—be it rail, truck, or ship—at a substantial cost savings over other shipping alternatives (see “Boxing and Shipping the Far Harbour 39,”).

If you want a cruising boat that can be boxed and shipped, then the Far Harbour 39 fits the bill. If youre not planning to use your boat this way, then save your $250,000 for a boat that has fewer compromises for the sake of shipping dimensions. The boat we sailed was a cold-molded wood and epoxy prototype that debuted at the Newport Boat Show and was built by renowned Oregon boatyard Schooner Creek. The fiberglass molded production boats—the first of which was delivered when this issue went to print—will be built by SAS-VEKTOR in Zadar, Croatia. For new concepts like the Far Harbour 39, this prototype approach is not unusual (molds, after all, are a huge investment), but we still don’t believe its in the best interest of the consumer. Anyone considering buying this boat should look closely at the production model. Without seeing a boat off of the line,

cannot confirm whether the finish work and construction quality of these hulls is consistent with the prototype we inspected and sailed.

The origins of the Far Harbour 39 trace back several years, when the companys principle Bernie Blum had his Perry-designed Cheoy Lee 44 shipped to Vancouver via Dockwise transport, a convenient float-on/float-off ship that is gaining popularity among cruising sailors.

Blum liked the ship-and-sail concept, but Dockwises routes were too limited for his tastes, and its rates too high. So Blum, a longtime Perry fan, approached him with his idea: a seaworthy pilothouse cruiser that could fit in a container. He wanted it stored upright to make it easier to load and unload.

“Bernie wanted an inside steering station, so the height limitation was the main issue,” says Perry, who had previously designed a 10-meter, one-design club racer,

, to fit in a container—although that boat was can’ted on its side to fit. “We knew wed have to remove the keel and rudder,” Perry said, “so it became a headroom thing.”

The 40-foot limit for the deck-stepped mast turned out to be a minor issue, as the full-batten main brings sail area/displacement numbers in line with contemporary cruising boats. Nevertheless, the boat was initially envisioned as a motor-sailer. But after the first sea trials, the tag of “motor-sailer”—still in some marketing literature—seemed inappropriate.

The boxy ends define its purpose, but a slight spring in the sheer, the angled pilothouse, two portlights, and a wide sheer-stripe help diminish its slab-sided looks. From most angles, however—from astern in particular—the Far Harbour 39 looks like what it is, a boat meant to fit in a box.

The narrow cockpit has 6-foot -long bench seats, and when the tiller—which extends nearly the full length of the cockpit—is installed, space is tight. Typically, the hydraulic steering is engaged, the tiller is removed, and either the autopilot or an inside helmsman takes over steering. The open transom is self-draining, but its all too easy for something to roll right off the stern. Compared to conventional boats of this size, interior storage is limited, although lazarette space is ample. The list of gear Blum piles into these lockers is impressive (including a valise-packed life raft, fenders, and his dinghy engine). On passage, the folded inflatable dinghy stores in the cockpit under the tiller.

The sloop rig has double spreaders that sweep back 25 degrees. Furling lines and sheets are within reach of the helmsman when at the tiller. There are 11-inch side-decks to get past the raised pilothouse. The token toe rail and 28-inch lifelines have been raised to 1.5 inches and 30 inches, respectively.

Designed for cruising, the 100 percent jib tacks easily. The 5:1 purchase mainsheet leads through a bulls eye and down to a conventional cleat, a simple solution, although not the easiest setup to fine trim. Slab reefing, mast-mounted halyard winches, and lazy jacks made the mainsail easy to manage, though you do need to go forward to handle the halyards (an arrangement many cruising sailors prefer for its cost-
effectiveness and reduced friction).

The genoa sheets lead to Lewmar tracks inboard on the cabintop. Twin Lewmar 40 self-tailing winches on the coamings handle these sheets. A horizontal Lewmar Concept I anchor windlass feeds rode into an anchor locker, and a Delta 44 working anchor nests in a rugged bow pulpit. (Oddly, the bow roller needs to be removed to fit the boat in its container.) The test boat had a roller-furled reaching assym (Code 0) making it easy to boost horsepower off the wind.

A hinged companionway door slightly offset to starboard leads belowdecks. The companionway door on our test boat (which would not fully open) has been replaced by hatchboards. Three steps down puts you at the level of the steering station to port, which has a bench seat and a full complement of electronics. There is no dedicated chart table. Visibility looking forward from the station is not great, but fine for daytime navigation and maneuvering in port.

The saildrive Yanmar is below this station, and access to it is good. One more step down takes you to the galley, which features 6 feet 8 inches of headroom, a gimballed, three-burner stove and an aft-facing sink to port, and a fridge/freezer combo to starboard. The granite countertops on our test boat turned the simple act of lifting the fridge lid into a ridiculous workout. (This has been changed.)

The saloon on our test boat was conspicuously lacking the drop-leaf saloon table, which, as far as we could tell, would make it impossible to move forward and aft without a tight squeeze.

The 5 feet, 10 inches of headroom in the forward was limited to the narrow centerline, but since this is primarily a place for sitting, this is not a big issue. Locker space is limited compared to conventional 40-footers, but with creative loading, a couple can tackle long coastwise cruises without this being too much of a problem. Both the port and starboard settees serve as adequate sea berths, and book storage shelves are behind the settees.

The forward cabin has a V-berth, with ample ventilation through side ports and a hatch. Access to the deep anchor locker is through a forward bulkhead. Just aft of the V-berth is a combined head and shower to port and a small hanging locker. Finish work was excellent on our test boat, but again, we cannot comment on the quality of the production models.

The Far Harbour 39 comes equipped with a full complement of Raymarine navigation equipment, including autopilot, chartplotter, and radar. Tacktick Wireless instruments measure wind, speed, and depth. The hydraulic steering has an easy-to-access shutoff valve inside the lazarette where its protected from the weather, although hasty piling of gear into this lazarette could block quick access.

The boat carries 75 gallons of water and 75 gallons of diesel fuel, both in aluminum tanks. The polyethylene holding tank contains 25-gallons.

Power is suppled by four Group 31 batteries of 100 Ah each, charged by a standard 60-amp alternator. One is a dedicated starting battery. A Xantrex 2,000-watt inverter provides AC power, and a Xantrex MS2000 battery meter monitors battery usage.

The boat is powered by a 40-horsepower Yanmar saildrive. Blum gives the boat a 600 nautical mile range, based on data he collected during a recent Caribbean cruise. At 1,700 rpm, our test boat cruised at 5.1 knots. Motorsailing at 2,400 rpm, the boat sliced the water at 7.1 knots.

To windward, the boat is quick to heel under any wind, but the bulb keel and chine effectively exert their influence. We tested the boat in 10 to 12 knots of wind on Narragansett Bay, R.I., and couldnt bury the rails with the sails sheeted hard and the wind at 90 degrees.

The fin keel and spade rudder made the boat easy to maneuver under power, and the saildrive kept vibration and noise below the 83-decibel mark in the main saloon. Tiller steering was well-balanced, but, and like all hydraulically steered boats, the steering inside suffered from a lack of rudder feedback to the helmsman. Hydraulic steering systems are generally robust, though routine maintenance is important, and they do consume power. The Far Harbour has the redundant tiller steering, should the hydraulic system fail.

Under sail, the boat was quite impressive in its handling, weatherliness, and speed. The boat close-reached at 5.7 knots in about 10 knots of wind, and we were able to tack through 85 degrees in the flat water. Blum reports 90- to 100-degree tacking angles in seas over 5 feet. Under gennaker in 10 knots of true wind at 120 degrees, it made about 5.3 knots. Pilothouse cruiser seldom get described as “fun to sail,” but the Far Harbour is a rare exception.

If your ideal boat is one that fits in a container for shipment cross-country or abroad, then the FH39 is the only boat on the market that does this and still offers the tankage, seaworthiness, and amenities for extended cruising.

For an adventurous couple that wants to expand their horizons without undertaking long, double-handed voyages, or an avid cruiser who keeps getting stationed at the far ends of the earth, the Far Harbour 39 works. It provides sufficient living space for two people of average height—no more—and the design is well-balanced considering the limits imposed.

Given the construction specs we were supplied, we believe the production models will hold up to a high standard. Were not convinced that boxing the boat up is as easy as it is portrayed, and for

Practical Sailor, the concept of a container boat requires a drastic philosophical shift.