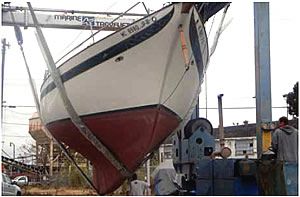 These boats are now more than 40 years old, and problems that existed in 1970, such as electrical wiring and poor metal castings, have either been rectified or have proved themselves with time to not be a problem. The only electrical wiring faults I encountered were with aftermarket accessories that previous owners had fitted. Both of my Cheoy Lees contained a lot of original wiring that was well installed, sealed, and insulated and had a problem.

I think the same can be said of the metal work. If it was a problem in the 60s or 70s, it has either been replaced by now or it has proved to not be a problem. I still have the original chainplates fitted. I know that the cleats and cowls have been replaced, but I think that this was just for aesthetic reasons; the originals had a very dull finish.

I don’t know about the 36, but the Clipper 42 does have an auxiliary emergency tiller. It comes up through the cockpit floor just aft of the steering binnacle. A tiller handle is supplied that attaches to it.

I think the Perkins 4-108 is only too small if you want to water ski. Mine will give me 5.5 knots at 1400 rpm. It uses about three-quarters of a gallon per hour. Sailing from California to Australia, I used only 60 gallons of diesel for the entire trip. I have always found it to have adequate power when pushing against strong currents in estuaries or marinas.

Access to the engine is almost non-existent, but the stuffing box is easy to access through the cockpit lockers with adequate room to work.

Not all Cheoy Lees were alike; they had different rigging configurations, etc. Cheoy Lees could be customized to whatever you wanted.

Both of my Cheoy Lees were fitted with good-quality, stainless-steel opening port lights. A teak boarding ladder that attaches amidship was also optional.

Clipper 42s came with three different interior layout options. Many people have commented on the large head in my boat, so I think it depends on which layout you have.

The timber paneling [ceiling] on the boat I bought was appalling. I have not seen a Cheoy Lee yet that does not have water damage to the interior paneling caused by deck leaks. The chainplates leak, the hatches leak, then to make it worse, the water runs behind the timber paneling and drips out somewhere else. It is a constant battle to find where it is getting in.

When I first bought this boat, I found it challenging to keep the helm balanced. Its best to start trimming from the bow and work back to find the right helm balance. Forget about trying to use the roller-reefing main. No need to replace the boom; just fit something else.

The main thing to remember with Cheoy Lee is that these boats were early pioneers in fiberglass. Cheoy Lee had to market and sell this new material into a traditional wooden-boat market. The boat had to look like a wooden boat, hence the teak deck, timber masts as well as the interior and exterior timber paneling.

Is it a workhorse or a show pony? The hull and sail design is of a sturdy cruising boat that can cross oceans and take a pounding from the sea. Its downfall is that there is nowhere to put davits or a dinghy, solar panels, or a wind generator, cockpit shade, stern anchor, gas bottles, etc., without destroying the aesthetic lines of the boat. Or is it a weekend show pony that wont point into the wind very well as it tries to sail slowly, but majestically around the harbor while its crew sips chardonnay. It doesn’t fit either category as well as some other boats do, but at the same time, it does do both very well.

The advantage of a Cheoy Lee today is that you can have the beauty of a traditional wooden boat with the benefits of fiberglass. Todays market and labor costs will never allow for boats like this to ever be built again.