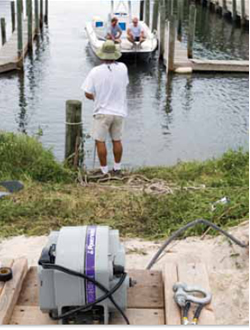 Quantifying anchor loads is tricky business, and our article on the topic, beginning on page 24, gives some insight into the trouble a tester faces when trying to compare the performance of various types of anchors. Apart from the obvious questions about the bottom type and the scope amount to be used for evaluating, testers need to sort out more subtle details, such as how the anchor should be set, how the load should be applied, and what the pull direction should be.

In previous Practical Sailor tests, weve loosely followed standard procedures used within the industry. We drop the anchor and apply an increasing amount of load up to a fixed number. Except when we are explicitly looking at veering loads, the direction of pull does not change. In our most recent tests, the maximum load applied was 500 pounds, far below the claimed holding power of the anchors. Many anchor tests apply much higher loads. Some aim to establish a maximum holding power by pulling until the anchor yields.

Nearly all of the testing we do at Practical Sailor involves some form of compromise. The scope of our testing is often limited by budget and time, so we try to evaluate those features that we believe are most important to our readers. As this months report on anchor loads points out, the data that results from a test of maximum holding power is not necessarily transferable to the real world. In addition, the generally accepted means of testing ignores two key factors: Anchor loads seldom steadily increase to a peak load, and anchor loads generally come from multiple directions. So how can a standardized test replicate the situations that a sailor might face in the real world?

The short answer is that it can’t. Anyone who has cruised for more than a few months knows that each anchorage presents its own special set of circumstances, and the sailor needs to have the equipment and the know-how to deal with them. If all we faced were calm, shallow anchorages with soft sand bottoms, choosing an anchor and setting the hook would be a piece of cake. But all it takes is one harrowing night of dragging toward a lee shore to shatter that illusion.

About 15 years ago, we came to the conclusion that our anchor tests should be separated by bottom type, and that our results should not lead to broad generalizations regarding overall setting and holding ability. Unfortunately many other tests are not so judicious: Results of straight pull, maximum-holding power tests are still presented as clear evidence of an anchors overall superiority over its rivals.

Now, based on this round of evaluations, it seems like another change to the PS protocol may be in order. Along with applying a controlled steady load in one direction, we are looking at ways to apply more sudden loads at an angle to which the anchor is set. At the very least, it is obvious that a comparison of holding power when veering loads are applied is long overdue.