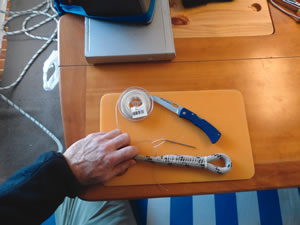 All lines were broken once to determine approximate breaking strength without a stitched eye. A simple chain fall and load cell provided a means of pulling test samples up to 5,000-pound loads. The samples were then sewn or knotted into dog bones 6 to 8 inches long with an eye on each end, and the load was again applied until failure. This allowed the testers to compare breaking strengths with and without a stitched eye or knot. The test was broken into two parts, laboratory and field testing.

Prior to the final lab protocol described above, testers broke dozens of samples of used lines to determine which method of stitching worked best. We sewed eyes in small-diameter lines, large diameter lines, and differing line types. We sewed with different patterns, with different thread counts, and we cut stitches away under load to see what sort of unraveling might occur.

We gradually improved our methods, and in total, we broke more than 100 samples, watched how they failed, and learned which were the strongest.

We sewed duplicate samples in both webbing and rope. These will be left in the sun for two to four years, at which time we will break them. We are also testing UV and chafe protectants, both in the yard and on the boat; look for a report in an upcoming issue.

We replaced many existing knotted terminations on our test boat, a 32-foot PDQ catamaran, with sewn and seized splices. Honestly, many of these were well served by existing knots, and we did this only to increase the sample population. In several cases-inside genoa sheets and spinnaker sheets-we had already switched to sewn splices to reduce snag.

Why not splices? The lines were old and no longer amenable to splicing, and it was with the hopes of safely re-using these lines that led to this article. We wanted to do it right.