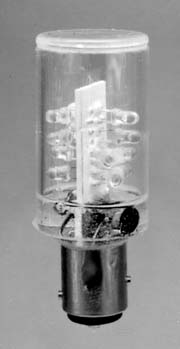 On the back page of the Fall 1999 Davis catalog are six new products—amber, red and white LED Clusters™ in either single- or double-contact bases. The prices may be a shock—$26 for red or yellow; $60 for white.

Practical Sailor first discussed the “light emitting diode” phenomenon in the May 1, 1997 issue. Drawing almost no power and virtually indestructible, the LED was first brought to our attention by a reader, Rob Hoffman, of Nashville, Tennessee. More recently, in the March 2000 issue, we tested a number of LED flashlights.

An admitted “techno-putterer,” Hoffman sent along two of his LED-based cluster bulbs. In 1997 he said the electrically excited crystals in the seven LEDs will produce only red light. We predicted then (not that we were crawling out on a long limb!) that, “There is little reason to think the lab folks can’t tinker with the frequency and make other colors.”

It is, in fact, Hoffman’s cluster bulbs that Davis is marketing.

Hoffman said that the 1997 PS article “propelled me into some areas that I never would have anticipated in my wildest dreams.”

“The dirt-dauber wasps have almost ruined the sails on my boat,” he said, “because they’re the only ones who have been using them since the article ran.” Hoffman, a professional photographer, normally gets out often on his 105M Gemini catamaran.

Hoffman was invited to design and build the interior and navigation LED lights for Steve Fossett’s new 105′, 35-knot catamaran called PlayStation (launched on December 21, 1998, in Auckland, New Zealand, and which recently set a new Newport-Bermuda elapsed time record) and found a partner for his new company, called Deep Creek Design. The new partner is Ken James, a retired navy gunner’s mate who specialized in guided missile systems. James developed a “pulse drive” for the LED that cuts nearly in half the already-low current consumption. (Because the LED lights up so quickly, it can be off half the time, thereby consuming less power, with no flicker.)

Deep Creek now has a 12-LED, pulse drive cluster in an anchor light bulb that consumes only 50 milliamps. The original seven-LED cluster bulb consumed 68 milliamps (mA). Contrast that with a comparable incandescent bulb, which uses 1,300 mA, and the superiority is startling.

Hoffman said the replacement bulb, which also contains a photo cell that can be switched to turn the LED on and off, is called FirstStar. Although not yet officially certified, he said it easily meets the USCG 2-mile visibility requirement. It fits the Perko 200 series and Aqua Signal 40 series cases.

In the October 1, 1999 issue, PS editor at large Nick Nicholson, cruising the Pacific with a FirstStar on the masthead, said it is noticeably dimmer than his 25-watt incandescent bulb, but “certainly brighter than a 10-watt bulb.” Its advantage is it draws just half an amp-hour during a 12-hour night, compared to 24 amp-hours for the 25-watt bulb.

When we asked Hoffman why an LED can’t be made bigger (to avoid the expensive clustering), he said the “physics” do not allow it. As with the question of the LED’s color, however, it seems likely that somebody will find a way to produce a bigger one.

Meanwhile, we plan to test the FirstStar anchor light against conventional 12-volt and battery-powered anchor lights, checking for visibility at the US Coast Guard 2-mile minimum, as well as current draw.