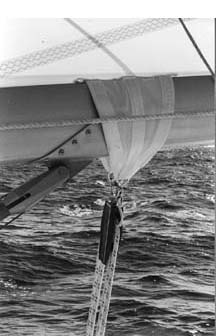 While our primary sailhandling hardware is Harken (mainsheet traveler, mainsheet blocks, inboard genoa tracks and cars, snatch blocks), we also use a variety of other deck hardware from Ronstan, Schaefer, and Lewmar.

The outboard genoa tack mounted on Calypso’s railcap is 1-1/4″ Schaefer black anodized aluminum T-track (Schaefer #40-30). The finish on this track has held up well, and after three years of use only shows oxidation around the stainless steel through-bolts.

The primary lead blocks on this track are Schaefer #32-97 twin sheet lead blocks, one per side. With their plain bearings, the sheaves in these cars have more friction than roller-bearing lead cars, but they are also bulletproof and inexpensive (about $140 each at most chandleries). Their through-bolt axles make them easy to disassemble and clean, although the only care they have received is freshwater washdown when we come into port.

Obsession, a 20-year-old Corbin 39 with whom we cruised the coast of Australia, is equipped with these same Schaefer lead blocks. After 20 years of exposure to the sun, the black anodizing has faded to a grayish-purple, and there are oxidation spots on the aluminum, but the blocks are still fully functional.

These blocks are not designed to be adjusted under load. A pin stop locks the block in position on the track, and most of the sheet load has to off before the lead position can be adjusted. We generally use these blocks as static lead blocks to create a fair lead from the outboard track to the genoa winches, since we do not have turning blocks. For the actual sheet leads we use Harken Hi-Load snatch blocks (#1601, #1609) mounted on Ronstan RF 699 genoa track slides. Like all track slides with spring-loaded pins, you have to fiddle with these a little when adjusting them to make sure that the pin has actually engaged properly in a hole in the track.

We have found these Ronstan slides to be extremely versatile, and have three on each of the outboard lead tracks. One slide is used for the genoa lead, one for the soft vang/preventer, and the other is a spare. We added the spare after bending one slide with the heavily loaded preventer tackle.

In Australia, “Ronstan” is synonymous with “deck hardware.” Every chandlery is loaded with this Australian-made gear, and virtually every boat we have seen-with the exception of very big boats and some very high-end racing boats-looks like a photo from the Ronstan catalog. Interestingly, some Ronstan hardware is cheaper in US catalogs than in the average Australian chandlery! High-end hardware like Harken, Lewmar, and Antal is simply too expensive for the average Australian cruiser or racer.

We have a fair amount of Ronstan hardware, mostly in the form of small tackles that are used to lift the outboard and secure the main boom athwartships in extremely heavy weather, when the trysail is set.

Soft Vang/Preventer
After three years of fiddling with various main boom preventer systems, we have finally settled on a conventional “soft” vang led from the boom to the rail. We have found that with the boom eased off for downwind sailing, a four-part tackle gives enough purchase to pin the boom in position both to prevent accidental jibes and slatting of the mainsail.

We divide the downward force on the boom between the Hall Quik Vang and the soft tackle. This is necessary because with the boom eased off, the vang carries almost the entire mainsail load. This load is high both in heavy air, when it takes a lot of force to pull the boom down to a safer and more efficient angle, and in light air and sloppy seas, when there can be considerable shock load on the vang.

Our soft vang tackle consists of two Lewmar Series 3 fiddle blocks, both with snap shackles for quick attachment. The lower block is fitted with a cam cleat. While these blocks have a nominal working load of 5,000 pounds, the cam cleat is only designed to carry about 500 pounds, limiting the effective vang working strength to about 2,000 pounds. So far, however, this tackle has worked fine in a variety of conditions, some of which have surely resulted in more than 2,000 pounds of load.

Our one complaint about these big Lewmar blocks is that they are riveted together, making it impossible to take them apart for service or replacement of the sheaves. Hardware in this load range is expensive enough that it should be put together with bolts to allow disassembly.

Originally, we secured the vang to the boom with a large Hydril Sea Snub, a heavy rubber strap designed for this purpose. The Sea Snub has been around for years, and is available through most catalogs. Unfortunately, the Sea Snub always ended up in a position on the boom that allowed it to chafe against the hard vang fitting mounted on the boom, and it has gotten chewed up to the point where we feel it does not have adequate safety margin anymore.

The elasticity of the Sea Snub provides excellent shock absorption, but our 17′ boom and 400-square-foot mainsail are probably at the upper end of the range for the gear.

In New Zealand, North Sails made us a Dacron and webbing “diaper” to attach our soft vang to the boom. This consists of a heavy sling of Dacron sailcloth and webbing, with stainless steel rings sewn at either side. The sailcloth simply holds the webbing in position-the webbing itself carries the load. As the name implies, the diaper simply fits over the boom, and the upper vang block shackles into the stainless rings. Like the Sea Snub, the diaper tends to fetch up on things that chafe, so we had additional stainless D-rings sewn to the diaper so it can be immobilized on the boom.

At the deck, the lower vang block shackles to a Ronstan slider on the outboard genoa track.

With low-stretch braided line, there is very little elasticity in this system-a mixed blessing. Everything is held rigidly in place, but the loads are very high. We don’t actually know what is the weak link in the system: the diaper, the vang blocks, the line, the track slider, or the track itself. Because we managed to bend one slider with an unfair load, we suspect it is probably the most vulnerable link in the chain.

Compared with our old solution of multiple preventer lines, this system is dead simple to use. Jibing, I go forward and ease off the preventer (after taking the new leeward runner forward) as Maryann trims the main and traveler amidships. After the main is eased in the new jibe, the lower preventer block is transferred to the new leeward side. It’s all nice, slow, and controlled, but Maryann is building some impressive muscles from trimming the main through all those jibes. She is more comfortable in the cockpit during jibes, even though trimming the main is harder work than tending the preventer.

The diaper is now permanently mounted on the boom, secured in place with a piece of line rove through a small eye on the boom. Any sailmaker could replicate this diaper in about an hour. In New Zealand, it cost us about $35 US. With labor rates what they are, we would expect it to cost about $100 in the US.

When the wind goes aft of 60¡ apparent, the preventer goes on.

It’s astonishing just how much deck hardware a cruising boat accumulates. Our “loose” hardware bag-spare blocks and winch handles, deck plates, spare rope clutches and parts-weighs about 50 pounds. We store this gear in a large, soft, padded drink cooler, so it can’t damage anything.

We have been fortunate in that we have not had a single significant hardware failure, partly because much of our gear is substantially oversized for the job. I constantly try to visualize the worst-case scenario for loading the hardware, then size things accordingly. If there’s any doubt about whether a bit of gear is up to the task, we simply go up one size. Yes, we end up with things that are heavier and more expensive than they need to be. I call it cheap peace of mind.