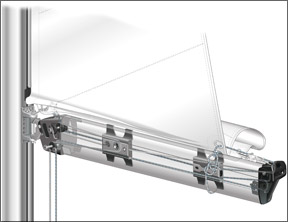 Recently, while working to add third-reef controls to the mainsail reefing on my Morgan 382, I realized I had no idea how to calculate loads and, therefore, no concept of the size and strength of hardware to install.

The first and second reefs have clew controls that, on reflection, vary greatly in their strength. The end of the reefing line is attached to the boom using Schaefer padeyes of about 750 pounds safe working load. The 7/16-inch line runs through Garhauer blocks with safe working loads (SWL) of over 2,000 pounds. One of the lines is secured in a Harken cam cleat attached to the boom, with only 300 pounds SWL; the other line is belayed on an aluminum horn cleat. Both lines are managed using a small single-speed Anderson winch.

So, when I add a third reef point, I have no idea what kind of loads to expect. I have reefed and sailed in winds up to 35 knots. Nothing has broken yet. Past that, I need the third reef. But how do I figure out the strength I need in my hardware? I want sufficient strength, but it gets harder and heavier to add big stuff to the boom. What would you suggest to calculate loads and size the hardware?

To handle your third reef, you can use a simple messenger. This short length of light line is run between clew points 2 and 3, and is permanently attached as a loop between the two. When the second reef is set, free the first reef line and use the messenger to feed it through the clew of the third reef point. If conditions deteriorate, you’re ready to reef again. The same stout tack hook can be used for each reef.

If you do add boom hardware, you can help prevent galvanic corrosion by isolating any stainless hardware from the aluminum boom with a dielectric bedding compound like Duralac or Tef-Gel, or a caulk like Sikaflex 291 fast cure.

To answer your question about loads, we turned to the engineers at Seldén Mast to find out how they calculate loads when rigging boats. According to Per Wretlind in Seldén’s Sweden office, a common misconception is that the sail area is the dimensioning factor when looking at rig loads. But they actually are the result of the boat’s righting moment.

In the case of your Morgan, he said, the righting moment at 30 degrees of heel is estimated to be 46 kilo Newtons (kN). This can be estimated with the boat’s beam, ballast, draft, and displacement. You can use the righting moment and rig geometry to calculate rig loads. Seldén estimates the main reef clew force to MSL (maximum in service load)=5.5kN, the reef tack load to MSL=3.5kN (10 Newton=1 Kg f). This will be true for all three of your reef points.

If you’re concerned about an over-crowded boom, Seldén suggests upgrading to a new internal single line-reefing boom. (See illustration below.)

But before trying to convert kilo-Newtons or investing in a new boom, you might consider some simpler, less expensive (and more practical) reefing solutions.

Reefing line(s) and hardware should be used to set a reef, not to take the full load. An easy way to reduce load is to use an earring. This is a length of line passed through the new clew and around the boom. A 3/8-inch line passed three times and knotted with a square knot serves fine. Once the reef is set, but while the sheets are still eased, simply lash the earring to the reefed clew. Slightly easing the reef line will put the load on the earring rather than the reef line. Because the reef line doesn’t hold the load, your reef lines won’t chafe through during a long passage.