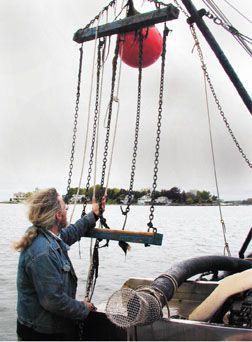 In November 2005, seven sections of 5/16-inch chain were lowered into the steel-ravenous waters of Long Island Sound, beginning a test to find the hardiest candidates for a mooring system. Those test beginnings were described in the March issue.

To recap, the test rig had five galvanized chains suspended by rope lashings between wooden crosspieces. A stainless steel chain went between the lower crosspiece and mushroom anchor, and a zinc-plated galvanized chain lived between the top crosspiece and the buoy that held up the whole affair. All those chains are identified in the accompanying chart. Note that Accos long-link “Mooring” chain is not included, simply because its not available in 5/16-inch. The corrosion resistance, however, is the same: Its a low-carbon, Grade 30 chain, hot-dip galvanized, like all of Accos chain. The long links just allow shackles to be fastened anywhere in the chain.

The chains spent six months below the surface during a breezy but unusually ice-free winter. With the help of our shellfisherman accomplice and his hydraulics, we wrested the rig out of the water in mid-May for our first inspection and comparison. Before taking a careful look, we removed all the chains from the rig, scrubbed them clean with fresh water, and let them dry inside for 48 hours.

What We Found
In this part of Long Island Sound, the upper sections of mooring chains invariably fare worse than the lower sections, which are mostly protected by mud, and the parts of the top chains nearest the surface and the mooring ball usually fare worst of all. In this experiment, while the top parts of the 5-foot sections were generally a bit worse off than the bottoms, it was the middle parts, or top-middle parts, that seemed to exhibit the most wear and tear, although degradation was pretty uniform throughout. We suspect that there was simply a bit more movement and friction in the middle part.

We were a bit surprised by the discoloration and beginning signs of corrosion around the welds in the links of the Suncor stainless chain. At this point, there do not seem to be any structural problems, but we will watch this carefully.

On close inspection, we could see no significant difference between the Campbell proof coil chain and the Chinese look-alike. These were slightly more deteriorated than any of the Acco galvanized chains-the steel itself looks a bit rustier and flakier.

We could also see no significant difference between the Acco Grade-40 high-test chain and the other Acco chains-the BBB or plain Grade-30 proof coil. Maybe more time in the water will differentiate the higher grade.

The zinc-plated Campbell chain has lost much of its coating, but looks pretty good structurally.

As a side experiment, we had soaked one-foot sections in the middle of the Acco standard proof coil and Chinese proof coil chains with two coats of Boeshield T-9, the waterproof rust and corrosion inhibitor made by Boeing. At the six-month mark, we found some very slight rust prevention and preservation of shine in some of the links on both chains, a bit more on the Chinese chain, but nothing that anyone would notice if they werent looking, and nothing to write home about.

Conclusions
Wed eliminate the Campbell and Chinese proof coils from our shopping list-they look the worst for wear now, and we guess the trend will continue when they go back in the drink. Now that the zinc plating is coming off the other Campbell, that chain may degrade fast, too, but it has already done better than we thought it would, so it will be interesting to see what happens. As for the Suncor Stainless chain, a certain amount of discoloration at the welds is understandable. Costing over $15/foot, its going to be out of reach for most us, but its worth including.

Based on a six-month immersion, if we had to pick a chain right here, right now, wed go with the standard Acco Grade-30 proof coil. It looks no worse than the more expensive Acco high-test chain at this point. But well keep you posted. The chains have all gone back in the water for the summer. This time weve double them in loops and parked them in shallower, warmer water. More fun with steel…

Also With This Article