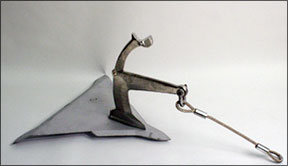 Having tested several anchors in mud over the last two years (February, April, and October 2006 and January 2007), PS still has new anchors rolling in for testing. Some we haven't seen before, and others are redesigns of previously tested hooks.

The Quickline Ultra stainless steel anchor, made in Turkey, is new to us, and the other two anchors tested are updated designs of the XYZ anchor, which we tested in 2006. One of the updated designs is a production model of the XYZ Extreme, and the other is a lighter-weight prototype version of the Extreme. Shortly before publication of this article, PS learned that a new XYZ design is due to be introduced, and this design apparently addresses some of the concerns raised by our testers. There has also been some discussion of introducing a galvanized version of the Ultra, which, if it happens, should help bring the cost down.

We used the same Manasota, Fla., residential boat ramp that weve used in a few previous tests. Test methods and protocols remained the same, too. The test is by no means meant to be definitive, but the data we have collected here, when supplemented with other unbiased information, will provide a valuable guide for those shopping for an anchor.

For our test, a 12-volt DC-powered 4,000-pound winch motor mounted on a wooden frame was positioned in the back of a pickup truck bed and used to apply pressure to the anchor rode after the test anchor was set. Moving the truck up or down the boat ramp allowed testers to change scope.

Test procedures were as follows: About 15 feet of cable was pulled off the winch and attached to our Dillon dynamometer, which in turn was connected-via shackle and hook-to the anchor rode. The rode consisted of 5/8-inch, three-strand nylon line spliced to 10 feet of 3/8-inch chain, a setup that serves well for our shallow-water testing, but is lighter than what would likely be found on a cruising boat equipped with these anchors. Shackles were used as needed to connect the anchor to the chain.

In determining proper scope, testers took water depth and the height of the winch above the waters surface into account. A crew aboard a PS test boat carefully dropped the anchor and then retrieved it after each load test was done. Anchors often came up with heavy mud clinging to them, so testers made sure each anchor was clean before the next test.

Once an anchor was properly placed, a tester onshore pulled the slack from the line and attempted to set the anchor by hand. After a set was assured, the rope was connected to the test apparatus, and the winch was engaged. Our goal was not to apply maximum pressure, but rather to apply a reasonable load, in our case 500 pounds, and then see whether the anchor would maintain its hold in the soft mud once the pull on the rode stopped.

Anchors were rated for how well they set and how many pounds of sustained holding power they exhibited. Anchors that slammed right into the mud and immediately held line tension were rated Excellent for setting. (That was the case for all three anchors we tested this time.)

When applying pressure with the winch, we tried to hit 500 pounds in a single steady pull. Some anchors hit it right away with minimal dragging, while others took a longer pull to do it. Once the winch brought the dyno up to 500 pounds or we reached the length limit of our pull, wed cease pulling and carefully watch the dynos indicator needle. Holding power shown in the table and mentioned in the text is the maximum load each anchor held after allowing at least a minute for any slippage to stop or stabilize.

The final determination on each anchor was made using all available information, including price, performance, weight, warranty, and stowability.

Quickline markets its Ultra anchor to yachtsmen based on its strength and aesthetics.

Our test anchor weighed in 48 pounds on our scale, two pounds over its stated weight. Quickline markets 10 different versions of this anchor, ranging in weight from 18 to 220 pounds. Prices range from $892 for the smallest to a whopping $7,528 for the largest. All are constructed from high-quality 316L stainless steel. The two main components, the flukes and shank, are welded and polished to a shimmering high-gloss finish. Lead is used to weight the bottom.

Quickline claims that the Ultra performs more functions like a Danforth-style anchor than a plow and that it is always self-righting and ready to dig into the bottom immediately. Our testing backs up this claim: The Ultra garnered Excellent set ratings at both the long and short scope. At the short scope, the Ultra hit 500 pounds after about a 10-foot pull. Once the pull was stopped, the pressure fell off to 300 pounds and held steady. At the longer scope, the anchor did even better, holding 400 pounds after a pull of only 5 feet. Overall, the Ultra fell toward the high end in holding power for anchors tested at this site.

All this beauty, strength, and holding power don’t come cheap: Our UA21 test anchor costs $1,965. Quickline warranties its Ultra series anchors for three years from the date of purchase.

Bottom Line: The Ultra performed well and will likely last the life of your boat if you don’t lose it overboard. Nevertheless, you can get similar or better performance as well as a longer warranty-and for $2,000, we think a 10-year warranty is a minimum-for far less money.

The original XYZ anchor (April 2006 issue), available in one size only, has evolved into the new XYZ Extreme, available in two sizes. Both of the new anchors are similar to the original, and like their predecessor, they are described on the website as “a radical departure from conventional anchor design.”

Both are available in either mirror-polished stainless steel or galvanized steel. Prices reflect the differences in look and material costs. The small version in stainless costs $597. Moving up to the bigger anchor will set you back $1,197. Both are somewhat less expensive in galvanized: $297 for the small and $497 for the big.

The original XYZ, a 13-pound anchor, performed superbly in softer mud at a different site in the 2006 test. The Extreme anchors performed well at the new site, reaffirming the designs efficiency in terms of performance. The lighter Extreme, a 17-pound galvanized prototype, managed to hold 350 pounds at the short scope and 300 at the long. It set easily both times and earned an Excellent set rating. The larger Extreme was a polished stainless steel production version that weighed 29 pounds. It performed about the same as its smaller sibling, holding 350 pounds steady at both scope settings and receiving two Excellent ratings for setting.

While the original design carries only a one-year warranty, PS was glad to see that XYZ has given the Extreme anchors a lifetime warranty.

Bottom Line: These anchors offer surprising holding power in a light package, but involve some compromise in practical application. The anchor may serve well as a kedge or secondary anchor, but it is less than ideal for everyday use on most sailboats.

Of the three anchors tested in this round, the one that most interests us is the Quickline. It appears well made and holds well, but our mud test is hardly definitive. Given the eight- to 10-year lifespan (or longer) of a well-made galvanized anchor, we find it hard to justify paying a premium for a gleaming anchor. The Quickline will look better than an old galvanized Bruce after five or more years of hard use, but whether that is worth paying two or three times the price of a galvanized anchor is a personal choice.

As for the XYZ Extremes, these anchors are obviously very effective in soft bottoms, but we feel the current design has several drawbacks for use as a primary anchor on most cruising boats.