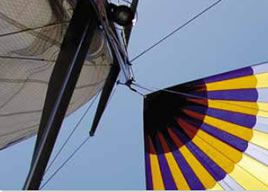 Snap shackles have become as familiar to sailors as pots and pans are to a harried chef. From dinghies to mega yachts, the function of these ubiquitous bits of hardware remains consistent. Each affords a quick and reliable means of making that all-important halyard-to-sail junction. The absolute minimalist might say that a bowline can do the same, afterall, isn’t it the favored means of attaching sheets to the clew of a sail? The knots-for-snap shackles debate loses out, however, when it comes to hasty halyard swaps, not to mention the release of a loaded spinnaker guy. And even if youre not quite ready to label these shackles as essential hardware, they certainly do make life on the foredeck a whole lot easier.

For this report, we took a close look at shackles used for spinnaker halyards, sheets, guys, topping lifts, preventers, etc. The commonality among most of these products is a piston and spring arrangement that latches the hinged shackle closed. Tylaska uses a different approach to the latching and release process, and one of the goals in our test was to compare the two approaches. Key attributes we labeled as vital are the ease of handling when it comes to snapping a shackle into place and the latchs ability to hold under a significant load. We used safe working load as the benchmark for strength, and among all the products tested, there was uniformity in this number being 50 percent of the breaking strength of the product.

All of the tested snap shackles were fabricated from stainless steel. Some of the parts were investment cast, while others were machined or forged.

The Ronstan 6210 and 6310 snap shackles utilize a 15-5PH precipitation-hardened stainless steel that is known as a Martencitic type stainless steel. The larger, 6310 Ronstan snap shackle afforded a deeper, wider jaw design with a long hinge and the largest plunger pin of the units tested. The smaller 6210 unit was also an investment-cast product and similar in size to the Schaefer 45-05.

Schaefers 45-05 snap shackle has a wide throat, investment-cast body and a deep hinge contoured latch. The plunge pins extend well beyond the aperture that it is inserted into, and the circular bail accepts up to -inch diameter line. Schaefer X-rays all snap shackles in order to detect any casting flaws; this is a significant commitment by a manufacturer and a plus to the consumer, in our opinion.

The Tylaska T12 is a latching snap shackle rather than a plunger-pin locking device. It is meant to be opened under load with a fid, and while a finger works fine when you need to open an un-tensioned shackle, it should not be done when theres load on a sheet, guy, or other type of line. The patented hardware excels as a snap shackle for a spinnaker guy and has wide support among racers.

The two well-finished, carefully engineered Ronstan snap shackles were smooth swiveling under load. Although they are slightly different in body design, the plunger pin in both is angled slightly down, which favors shackle closure. Both models use large-diameter plunger pins and strong springs to further ensure that these snap shackles stay closed. The plunger pins were nonmagnetic and likely made of highly corrosion-resistant 316 stainless. Because the design favored features that enhanced the shackles ability to stay closed, they took a little more pull to open, a trait easily mitigated with pull lanyards, which are available from West Marine.

A big up-side of Ronstans manufacturing process is that it X-rays its snap shackle hook components, which is the best way to confirm that castings are free from voids and imperfections. Also, all cast components are batch tested.

The Schaefer 45-05 snap shackle is an ergonomic design thats easy to snap onto the head of a sail. The bail of the sample we tested was much less highly polished than other products in this comparison, and rough surfaces around the swivel interface caused some binding and more friction than found in other products. Its likely that through initial use, some of the roughness will smooth out. Like Ronstan, Schaefer X-rays its snap shackles for voids and inclusions.

We discovered why Tylaskas T12 snap shackle is the bowmans best friend, regardless of whether its used as a set of handcuffs (two snap shackles joined together and used to expedite a spinnaker peel) or as a standalone snap shackle at the end of a sheet or guy. These latch-type shackles can easily be released under load. In our testing, it took just 5 pounds of push to insert a fid and a very slight jiggle to pop the latch, even with 1,000 pounds of tension in the line. We also found the shackles easy to open and close in no-load conditions, and they are compact for hardware thats capable of handling a 6,000-pound safe working load.

Theres more to snap shackles than the ease with which they click onto the head of a sail, and the greater the load in the sheet or guy, the more important metallurgy and engineering becomes. Our close scrutiny of the four examples above drove home some expected and unexpected conclusions.

First of all, theres been a sea change in metal preference, and along with stronger alloys comes an uptick in their reactivity to the chloride ion. Passivation and strengthening are achieved by precipitation hardening, which results in an even distribution of chromium at the surface of the metal. When exposed to air, chromium dioxide forms, resulting in a smooth, shiny protective surface. When ferrous imperfections interrupt this pattern, pitting, rust, and crevice corrosion can take hold. Theres a fine line between unsightly and unsafe. Rust should be polished clean and inspected with a magnifying lens or loupe to check for cracks or signs of deeper corrosion. Suspicious-looking flaws in highly loaded hardware, usually spell replacement. If in doubt, have a skilled rigger take a look at the snap shackle.

After putting this snap-shackle foursome through our test maze, we found favorites for specific jobs. The biggest standout was the Tylaska T12; its hands down our Best Choice for the business end of a spinnaker guy. The fid, push-to-release opener kept fingers out of harms way, and the heavy-duty snap shackle also was just right for the under load release fitting needed in a spinnaker peel.

The larger Ronstan snap shackle (6310) has a deep, wide jaw, swivels under load, and is nicely finished. But the smaller Ronstan (6210) had nearly the same safe working load rating and was almost 40 percent less expensive, so it got our Budget Buy.

Schaefers 45-05 is an ergonomically designed snap shackle that has a long plunger throw and positive overlap. It was easy to handle, and if it had a smoother operating, less binding swivel, it would have finished higher in the ranking.

We plan to monitor the effects of oxidation and weathering on the tested snap shackles during the next phase of this evaluation; stay tuned for the report.

Snap Shackles
How We Tested
Tips & Techniques
Zooming in on Pin Design, Fit, and Polish
Contacts