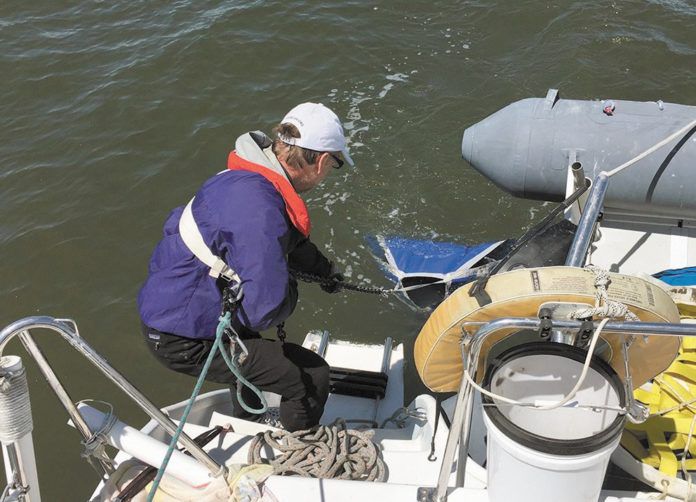 Thanks for this discussion of using drogues for controlling a boat with a rudder lost or jammed over (see Sailing Without a Rudder, Practical Sailor, April 2017). I carry a Jordan Series Drogue (JSD), and I think that by bridling it somewhere in the middle, such that some of the cones open to resist water flow, and some are collapsed one could adjust the amount of drag that was appropriate for the conditions. Have you considered testing this?

I have a Wylie 43, a rather unique high performance 12,000-pound cruising boat with an electric auxiliary, lifting keel, unstayed mast, composting toilet, and recirculating shower. Details of her design and construction are at Prestissimo.org.

Using a short bit of JSD as a steering drogue, instead of the full length, seems like a good idea. About one-third of the full length should provide the correct amount of drag based on earlier PS testing. This size would also be easier to handle, having no large elements, and would be easy to adjust drag by varying the number of cones in the water. Several makers of the Jordan drogue reported that the had, in fact, built shorter Jordan drogues for this purpose, but could offer no details on performance.

Intrigued, we tested a short series drogue and to our slight surprise, found it less stable and useful than a conventional steering drogue. The reasons are subtle.

First, cones are the least effective and most unstable drogue element design (see PS September 2016, How Much Drag is in a Drogue?), particularly when running near the surface, and the JSD cones are very crude cones. They work in a JSD because the tail runs deep and the speeds are very low. However, the whole JSD provides far too much drag for steering, practically stopping the boat. But what if we use only 1/3 of the drogue? Unfortunately, because of the increase speed and load-per-cone, the tail no longer droops at all and the cones run very near the surface. Many of them pull right out, and the rest skim, since they are too small and poorly designed to bite in, and the speeds are much higher. Those in the water are simply inefficient at these higher speeds. The result is that the drag is not steady, pulsing considerably as each wave passes and the number of cones in the water changes. The behavior is now completely different than a JSD because it is running on the surface and because the cones are running at 4-6 knots instead of the 1-2 knot design speed.

Second, cone durability is not very good. Instead of running under water, most of the cones are now in the shock zone, filling and dumping every few seconds and generally getting knocked around. They are also running at two to three times higher speeds and experiencing much higher loadings than a JSD cone will see in a severe storm. This seems counter-intuitive, but strain is far more about the speed through the water than the wind speed. And while a JSD is expected to survive for a few days in storm conditions, we may be asking for a week or more at up to nine times the stress level when using it as a steering drogue. If you then need to use the full drogue in a storm, the cones may be too weakened to be useful.

Could the stability problems be resolved with greater cone spacing or added weight? We tried several variations and the results were unimpressive. Obviously, the cones could be made more durable, but the impact zone is a tough place to live, and a reinforced series steering drogue would be heavy, expensive, awkward, and ineffective when compared to commercial items.