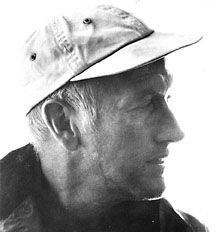 Robert N. Bavier, Jr., an America’s Cup winning helmsman and one of the sport’s leaders for many years, died on Thursday, February 22, in Charleston, SC. Bavier was 82 and had been in declining health.

He first raced at the Larchmont (N.Y.) YC on Long Island Sound, was a top junior sailor, and won the intercollegiate sailing championship, representing Williams College. After Navy duty during World War II, he joined the staff of Yachting magazine, where he spent all his working life before retiring to South Carolina in the 1980s.

Widely considered one of the East Coast’s best racing sailors, Bavier sailed at the top of highly competitive fleets of International One-Designs, racer-cruisers, and other classes on Western Long Island Sound. He was a master of tactics and had an uncanny ability to sniff out wind shifts. In 1964 he was in the afterguard of the 12-Meter Constellation in the early rounds of the America’s Cup defender’s trials, when the boat was regularly beaten by American Eagle (skippered by his Noroton YC clubmate Bill Cox). After Bavier was named helmsman, Constellation’s performance improved dramatically, and she won the trials and then the Cup races in a sweep over the English challenger Sovereign. Ten years later, Bavier served as skipper of Courageous in the early Cup defense trials but was replaced in the final trials.

A skilled long-distance sailor and brilliant navigator in the days before electronic navigation, Bavier also was successful in offshore racing, for example, as navigator of Ted Hood’s Robin when she won the 1968 Newport-Bermuda Race and as skipper of several racer-cruisers, including the One-Tonner Witch in the ’70s.

As successful as he was as a racing helmsman, Bob Bavier’s place in yachting history was most assured by his leadership of and influence on the pastime of yachting as it underwent its tremendous post-war expansion. From the 1940s to the late ’70s, he was at the sport’s center. Besides winning the America’s Cup and other championships, he served a term as president of the North American Yacht Racing Union (today US SAILING), was for many years a US delegate to the International Yacht Racing Union (now ISAF), and served on committees that wrote the racing rules, heard appeals, and chose Olympic classes.

He was no less influential through Yachting, which for many years was the leading sailing and racing magazine as well as a dominant force in the boating industry. As he ran the advertising department and ultimately the magazine, meanwhile writing articles and a monthly column, Bavier’s policies, ideas, and opinions inevitably affected boatbuilders and boat buyers alike. He was as interested in small boats as in luxury yachts, and introduced and ran the magazine’s unique Yachting One-of-a Kind Regattas, where each class was represented by a single boat. The regattas, held every few years, were testing grounds for new ideas. No single event in the United States did more to publicize the modern breeds of planing boats, catamarans, and small racer-cruisers.

Bavier also wrote several fine books on racing tactics, the rules, and the America’s Cup, including Sailing to Win and A View from the Cockpit.

Editor’s Note: The following is taken from an anecdote about Bavier by Peter Szasz. It appeared in Tom Leweck’s e-mail newsletter “Scuttlebutt” shortly after Bavier’s death:

A few years ago I had the pleasure to spend a delightful day sailing a Santa Cruz 52 to Tinsley Island. One of the guests on the boat was Bob Bavier. He seemed a little frail, the years showing their mark.

Halfway to the island we set sail as the sea-breeze caught up with us. We all took a stint at the wheel and marveled how well the boat sailed. Near the Pittsburgh bridge we spotted a Farr 54, ahead on a pleasant spinnaker reach. It was Bob’s turn at the helm. “We’ll pass those guys!” he declared.

Within a few seconds he took command. “Pole forward, little more vang, ease the traveler,” came the orders. The boat responded, and the knotmeter was steadily climbing. But the most significant change was not the way the boat reacted. We could see the years peeling off Bob’s back, his eyes narrowed and sparkled. He was getting 20 years younger in front of our eyes.

After working the boat to closer and closer to the wind, it was clear that the Farr would not let us pass to weather. Bob bore off just at the right moment, just the right amount, and within a few minutes we were ahead. Bob turned the helm over to the next guest, job well done, and went below to take a nap. 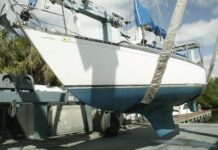 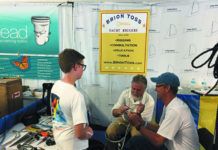