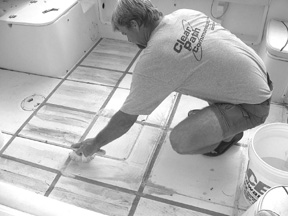 Nonskid—whether it’s raised diamond, speckled, or some other form—plays a crucial role in keeping you safe while traversing the decks of your boat. And since boat manufacturers are sometimes stingy when it comes to handrails and handholds, an aggressive nonskid is all that more important.

Nonskid’s bumpy surfaces, crevices, and contours are, alas, an ideal home for dirt, grime, and the like, and thus more difficult to clean than smooth surfaces. Talk about elbow grease. If you’re not using the right cleaner, you’ll never get the job done.

The marine industry has developed a number of products formulated specifically to clean nonskid. We rounded up a bunch of them for our test, and then threw in a couple of household cleaners for comparison’s sake.

What We Tested
Our group comprises some familiar names in the boat-cleaning business: Star brite, Aurora, Mary Kate, West Marine, 3M, and Meguiar’s. An Internet search yielded a nonskid cleaner from Nautical Ease, a Saginaw, MI, company. We also found a cleaner from Sea Bowld. Four household cleaners—Soft Scrub, Fantastik, Orange Clean, and 409—rounded out the field. (We should note that West’s cleaner is made by Star brite, and is an identical formulation.)

All these products advertise that they’re biodegradable. Some claim to leave behind a protective coating. Star brite covers the clean surface with Teflon, for instance. Only the 3M product listed its contents.

How We Tested
We’re not just talking about grime, grease, and fish blood. These may be the most frequent substances dirtying your decks, but think about it. A number of different nasties can invade. How about mustard, ketchup, cranberry juice, suntan oil, motor oil, and coffee? Can you say Budweiser? At one time or another, most of us have spilled a beer on the deck.

Our testers went to a local store to get all of the foodstuffs. We contacted a fishing buddy to get some blood and guts. He had recently caught a 27-lb. kingfish and was happy to make the donation.

The good old 22-foot runabout that we share with our sister publication, Powerboat Reports, served as the guinea pig. The boat has a big open cockpit area with raised diamond nonskid not unlike that seen aboard many production-built sailboats. The cockpit sole was dirty to begin with, so each product in our test was put to work cleaning what was already there and then some.

To ensure uniform testing, we segmented the cockpit into sections that measured roughly 2 feet by 2 feet. Within each square, we applied a 2-inch-wide strip of each staining element using a paint brush. The kingfish was two days old and frozen, so most of the blood was congealed even after it thawed. Still, we were able to dig into the fish’s innards with the paint brush and obtain a fearsome mixture of blood and guts. After applying all the staining elements, our testers then allowed the surfaces to get good and dry before the cleaning commenced.

Working from the transom forward to avoid run-off from one cleaning agent contaminating adjacent squares, our testers applied the cleaners, closely following the directions of each. We used either a small handheld scrub brush or a white cotton cloth to clean the surfaces, and we spent an equal amount of time cleaning each section.

A handful of the products require you to wait anywhere from 30 seconds to two to three minutes after application and before rubbing or scrubbing.

What We Found
All of the marine nonskid cleaners did a good job of cleaning the cranberry juice, beer, and other liquid stains that we applied to the cockpit sole. The grease and the fish blood/guts proved to be the toughest stains to remove. Even the best cleaners left faint stains from the fish blood/guts on our deck.

Only Soft Scrub completely removed the fish blood/guts. However, you really shouldn’t use Soft Scrub on boats because much of its cleaning prowess comes from abrasive particles. The manufacturer stipulates this on the bottle: “ATTENTION: To prevent scratching…fiberglass…surfaces, use sparingly and rub gently.” Among the other household cleaners, Fantastik performed the best, leaving behind only some fish blood/guts and grease stains.

And the Winners Are…
The products from Meguiar’s and 3M performed the best, easily removing all of the substances and leaving only faint fish blood/guts stains. We used these two products to clean the rest of the boat’s nonskid surfaces. Ranking right behind Meguiar’s and 3M in cleaning performance were the products from Nautical Ease, West Marine, and Star brite. The Aurora Boat Scrub worked well, too, but it left behind a slight coffee stain, along with some grease and blood/guts.

Now let’s look at pricing—specifically, price per ounce. Of the top five performers, the West Marine and Star brite products are the cheapest by the ounce: 25 and 28 cents, respectively. Nautical Ease’s cleaner is less expensive, but you almost certainly have to buy it online, which will add a couple of bucks in shipping. The Meguiar’s and 3M products are the most expensive in our group. And Fantastik is very inexpensive when compared to the others (roughly 6 cents per ounce).

Bottom Line: Get the Meguiar’s or 3M cleaners for tough nonskid jobs. Boat owners who conduct their own maintenance—meaning occasional oil and grease stains on deck—would do well with either of these two more expensive cleaners.

For the rest of these stains, we recommend the Star brite, West Marine, or Nautical Ease cleaners. They’re effective and not that expensive. If your nonskid rarely sees the stains that we subjected our boat to, then Fantastik should do the job. 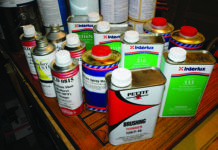