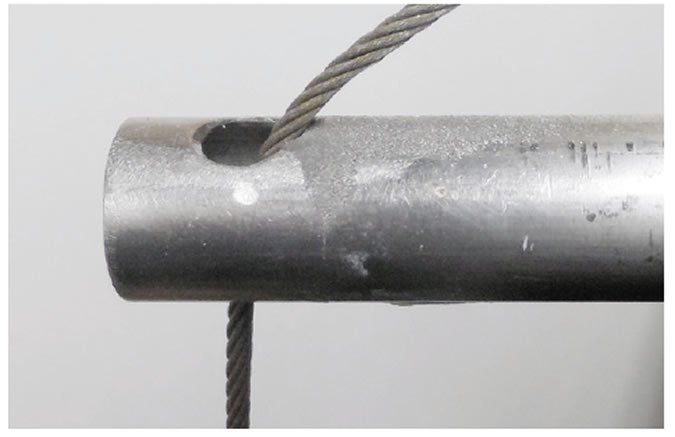 To see how chafe points can develop on stanchions, we ran standard steel cable through our test stanchion holes for an hour. As expected, the sawing action wore a rough-edged groove, but several other things became apparent.

Surprisingly, the steel wire wore more severely than Amsteel. At the end of one hour, about 15 percent of the wire strands had failed, and most of these failures were invisible until the cable was flexed. Most of the failures were deep inside the cable, clearly a result of flex and fatigue and not wear.

The bare wire formed a sharp burr on the inside of the test stanchion, equivalent to a freshly drilled and unfinished hole. We ran Amsteel over the freshly burred hole, and the wear was significant, though not as severe as with the wire.

Stanchion holes should always be polished before switching to fiber lifelines, especially if bare cable has been used. Burrs on the lip should be rounded with a countersink or a Dremel tool fitted with a fine grindstone. Next, both the lip and interior should be polished with fine emery paper, down to 600-grit.