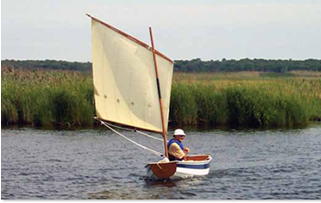 I was pleased to see that you included a very favorable review of the Eastport Pram in the August 2011 report on performance dinghies. I built one myself and have found it to be an excellent and durable tender. Although I worked alone, Carmans River Maritime Center (www.carmansrivermaritime.org), where I built her, has an excellent program for young people building boats with adult partners.

I’m glad that you mentioned the “unquantifiable sense of accomplishment” one gets from building their own boat and the “memories and boat that last.” As vice president and a volunteer instructor at the Maritime Center, I can attest to the multifold truth of your statements, and I recommend that anyone having trepidation about tackling a boatbuilding project link up with a nearby organization or prior builder who could guide them over the rough spots.

Coppercoat earned a Poor performance rating at the 12-month mark (PS, October 2010) and a Poor at the 18-month test checkup (PS, March 2011). It didn’t make the cut after 24 months, so it was not included in the two-year test results table in the October issue. (Search for “Coppercoat” on www.practical-sailor.com to find all of the reports on the paint’s performance.) And while Coppercoat is promoted as a 10-year coating, it does require regular cleaning to expose fresh copper, which is not part of our protocol for the static panel test and could explain its sub-par performance. Some readers have reported good results over multiple seasons from using Coppercoat with semi-monthly cleanings to remove slime.

In your recent article in Practical Sailor’s Waypoints, “Getting the Charge out of Lightning” (February 2011), you mentioned the difficulty of getting a good contact between an aluminum mast and a copper grounding conductor. Indeed that is a problem. In a marine environment, the galvanic corrosion will eat the aluminum at an unbelievable rate. However, there is an easy and economical solution. An electrical supply house can supply you with a bonded aluminum-copper connector used to connect copper conductors to aluminum buss bars.

Bolt the aluminum side to the mast and connect the grounding cable to the copper end. I used a stainless nut and bolt, with plastic insulating washers to keep the stainless and the aluminum separated. For the connection, I sanded the mating surfaces and greased them, before tightening the bolt. I then covered the whole works with liquid electrical tape.

Since I have a trailerable boat and can get at the lower end of the mast, the physical connection to the mast was not a problem. When I de-rig the mast once a season, I remove the connection at the mast and then re-do it when I step it. This also ensures that I check the mating surfaces every year for problems. For permanently installed masts, I recommend getting a welder to install a heavy aluminum tang in a convenient location.

I use a #2/0 cable that runs directly down to a copper through-bolt to a copper plate on the hull bottom. All my other lightning grounds, and my electrical system, run as straight as possible to the same point. I used solid copper connectors on the cable and crimped them using 24-inch rigging crimpers. I also soldered the connectors, after crimping, and covered them with liquid tape to keep moisture out.

By the way, I am a retired electronic field engineer and installer. I also taught electronics technology at Yakima Valley College for 27 years, and have held a Washington State Electrician’s license and a First Class (now General) FCC Radio Telephone license.

Without knowing the particulars, it seems your setup complies with the American Boat and Yacht Council (ABYC) standards on lightning protection systems (LPS), which allow for special connectors between aluminum and copper alloys. ABYC emphasizes that, except for conducting materials that are part of the boat (such as a mast), only commercial-grade copper should be used in LPS; any conductive joints should have resistance no greater than that of the conductors used. We encourage anyone adding or improving an LPS to closely review the ABYC standards or to consult with an ABYC-certified technician.

I read with interest your article on the Velux 5 Oceans Race (September 2011), but these boats look as though they could be sailed without a captain, from home by computer. I had to laugh, wondering whether any of these skippers would be able to sail Trekka, John Guzzwell’s 20-foot homebuilt boat around the world! It is in our nature to go faster and advance our technology, but I could not help thinking about Guzzwell and Joshua Slocum and the many others that cast off with a compass, sextant, some old charts, a bag of potatoes and onions, crackers, water and pure guts. Who needs four satellite phones?

It’s also funny to think about Slocum stepping aboard an Eco 60! And while you can’t actually sail an Eco 60 from a laptop, you can “skipper” a Volvo Open 70 from a computer in the virtual version of the Volvo Ocean Race. Users can play via FaceBook, the VOR website (www.volvooceanrace.com), Android devices, or iPhones, and the winning “skipper” gets a new Volvo XC60 car. Virtual around-the-world sailboat racing—now that would really boggle Slocum’s mind!

Interesting article in the September 2011 issue on alternative energy. We’ve always been advocates of quiet, free power and manage to not need to run our engine to just charge our batteries, whether we’re only overnighting or out for 10 days. House batteries are four 6-volt golf-cart batteries, wired in series/parallel plus a 12-volt starting battery.

Navigation lights, cabin lights, and refrigeration are all handled by three solar panels that put out as much as 17.5 amps. We do not have radar, and the anchor winch is manual, but we do frequently run 110-volt power tools and the blender for margaritas. Despite Brad Van Liew’s comments in the article, I don’t consider 17.5 amps to be trickle charging. Certainly if your charging system is designed to handle your daily electrical needs, then the batteries are charged fully each day, and there is no deficit and no need to ever plug into a dock.

As far as the hydro-generators go, a nice idea, but they don’t produce anything when you’re on the hook. The $7,200 cost is really exorbitant; a state-of-the-art wind generator will produce approximately the same amount of energy—underway and at anchor—for a cost of $1,000-$2,000.

PS reported on ways to clean soiled lines and running rigging (PS, July 2011), but there is a method that was overlooked. Recently, as Hurricane Irene approached, I dug out my embarrassingly large collection of old lines to secure my Hylas 44 and other boats in our marina. The lines had been stored in a dirty heap in a barn and were heavily soiled. After hours of 50-plus-knot winds and torrential rains, heavy loading and repeated cycling—and a thorough rinse—my lines are almost factory clean!

Last year, I bought a boat in Savannah, Ga., and moved it up to Lake Champlain in Vermont. All of my previous boats have been freshwater boats, and I’ve used Interlux VC-17m on their bottoms with good results. This boat has an ablative paint (brand and age unknown), and I’m wondering what my best course of action is for repainting the bottom. Can PS’s bottom paint test results be applied to freshwater conditions? Would you recommend re-coating with the same paint or stripping the bottom and starting over, perhaps with your recommended Epaint EP2000? How well would a paint that requires significan’t sunlight work in a northern climate?

If you race and like the VC-17m, we recommend sticking with it, but it cannot be applied over an ablative. Be sure to prep the hull according to Interlux (www.yachtpaint.com), which might require significan’t effort. (Check out our look at sodablasting in the October 2011 issue.)

If you don’t want to do that, finding a compatible paint may be a challenge since you don’t know what’s on the hull now. Some manufacturers have a paint that they claim is compatible with “unknown” paints, so talk with manufacturers to find out what these are, and you can go with any that have been rated Good or better in our past tests. All of our tested paints can be used in fresh water, except Interlux Micron 66.

In our tests, EP2000 has been more effective than VC-17m—even in New England—although we have not tested it in fresh water. If you race, the Epaint ZO-HP is slicker. Also, Epaint’s Ecominder should go over what you have on the boat. It is a freshwater paint, in our book. If you do three coats, you should get two good seasons.

Generally, if you find a paint you like and that you know works in your locale, we recommend sticking with it.

Largely based on PS reviews, I purchased two 30-amp Smart Plug shore-power connections (PS, June 2010) and an Alpenglow 12-volt overhead light (PS, January 2009). The products have been in service roughly a year, and I am well pleased with them.

The Alpenglow failed shortly after installation, but the maker promptly sent a replacement and refunded the shipping for the return. The replacement has functioned without problem. With its red LED lamp, the Alpenglow has enough light for people on deck to visit at night without interfering with the helmsman’s night vision. The two-level white light provides excellent illumination.

The Smart Plugs were installed after a twist-lock plug shorted out. The new plugs have thermal protection, providing peace of mind regarding overheating, and the design takes the difficulty out of lining up the plugs in the dark.

Product Updates
Youth Safety
Where Credit is Due