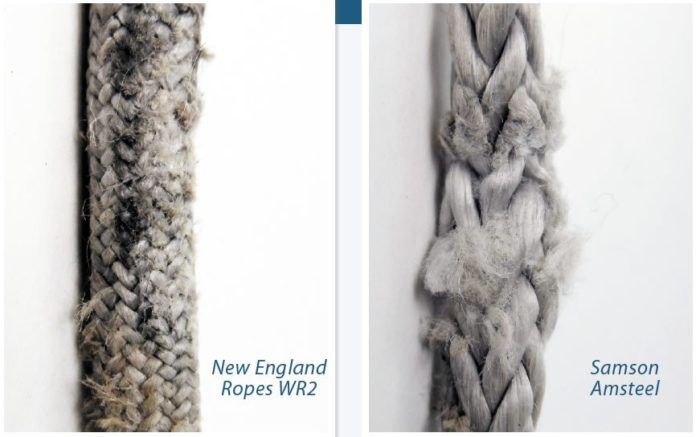 Our testing made us wonder whether we are better off with a core-and-cover lifeline with a tough cover, like New England Ropes WR2, or an uncovered rope like Samson Amsteel, which is much stronger than the smaller-diameter WR2 core. (Because of the way WR2 is spliced, the cover should not be counted toward strength.)

The adjacent photos show the WR2 and Amsteel lines after pendulum testing but before pull testing. The WR2 has no core damage, and the Amsteel was about 20 percent worn, based on measuring the adjacent cross-section.

Although the Amsteel line was far stronger to start (ultimate tensile strength of 8,600 pounds versus 6,150 pounds), after the 50 strokes the WR2 retained full strength, while the Amsteel had dropped to 3,100 pounds, which puts it out of compliance for a lifeline according to ISAF standards. Proof of the value of chafe sleeves and the toughness of WR2.

Although it is obvious that the Amsteel is damaged, the damage gives little hint that only 36 percent of the ropes strength is remaining; this may explain some of the unexpected failures reported on the racing circuits. If the line were the minimum size that was previously allowed by racing boats (4 millimeters), its ultimate strength would have been less than 1,000 pounds, hardly enough to support the weight of several sailors leaning outboard as external ballast, or rail meat. It seems clear that Amsteel loses more strength than it appears to when it chafes.

One reason for this is the slippery nature of the polyethylene fibers in Amsteel and similar ropes. When a few strands of polyester rope are damaged, the other strands carry the weight, and friction between them is sufficient that all strands carry load. However, on Amsteel and other high molecular polyethylene ropes, the strands are so slippery that load is not shared. Our testing supported findings of other tests that found that the loss in strength is roughly proportional to cross-sectional area loss. Each strand must carry an equal amount of the load.