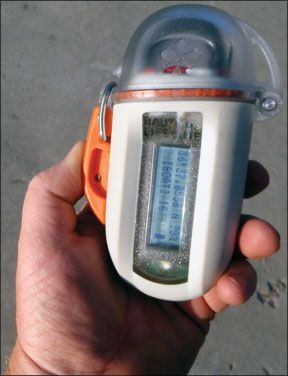 During our recent test of man-overboard electronics (PS, May 2013)-alarms, beacons, and self-rescue devices-we came across a rescue communication product thats been making waves in the diving community: the Nautilus Lifeline marine rescue radio. Being lost at sea is one of the fears that divers and sailors share-remember the 2004 movie, Open Water?

The Nautilus Lifeline is a handheld VHF radio that has GPS and DSC capabilities. It allows users to send a digital emergency mayday that includes their personal information and their location, and it allows them to talk to rescuers.

Invented by Capt. Mike Lever of the liveaboard dive boat Nautilus Explorer, the Nautilus Lifeline features a tough polycarbonate housing and a latching clamshell cover that is waterproof to a depth of 425 feet (when closed). Users must open the cover while out of the water or at the surface, to access the VHF, speaker, and DSC controls, all of which are waterproof to a depth of 3 feet.

The Lifeline features a roughly 1.75-inch by .625-inch LCD that shows such information as GPS location, the number of satellites in view, the channel in use, and the batterys charge level. When scrolling through the menu, the screen shows volume, squelch, and channel selection. Other visual displays include a green charge light and a position-indicating strobe that flashes when the device is in distress mode.

Three buttons control the VHF: chat, hailing, and DSC. The green chat button, which also doubles as the on button, allows users to key up a pre-selected VHF channel (68 for example) and communicate with other VHF radios on the same frequency. The chat channel can be changed by pressing it three times, then selecting from a list of pre-loaded channels. The orange hailing button is akin to a quick-16 channel selection button; it allows users to key up and communicate on channel 16, the international VHF hailing and distress frequency. The red DSC button allows users to send a DSC emergency distress message to all DSC-capable VHF radios in the vicinity.

The Lifeline has an 1850 mAh lithium-ion battery that provides 24 hours of power while in distress mode, according to the maker. Charging is via a plug-sealed USB port that can connect to a 110/220-volt AC adapter or a computer USB port.

We tested the Lifeline during a two-week cruise through the Bahamas and during the return passage to Florida. Testers used it while snorkeling and as a primary VHF for the dinghy. We also included it in our MOB gear pouch.

What We Found
The floating, easy to carry Lifeline got high marks for its robust construction and its GPS tracking features. To record the coordinates of a location, or even export them to a maps API when hooked up to a computer, all you have to do is simply power the Lifeline up. We found this particularly useful at new snorkeling spots and once, to mark where the dinghy anchor was lost.

As with any piece of electronics with numerous functions and only two control buttons, accessing the Lifelines advanced functions is not particularly intuitive. For example, to adjust volume on the Lifeline, users have to press the Chat button and the Hailing button at the same time, then scroll through the menu with the Chat button until reaching the Volume option, then press the Hailing button to lower it or the Chat button to increase it. Also, theres a 2- to 3-second delay between the radio being keyed and the voice transmission beginning-this could be an issue if the user is unaware of it or forgets in an emergency.

The Lifeline is well made, but there are some improvements that wed like to see. The untethered USB protective cap is small and can easily be lost. Wed also prefer that the display had backlighting and that the DSC capabilities included sending non-distress messages.

According to the maker, a firmware update due out later this summer will address the user interface challenges we had. It also will include a new, more intuitive menu system.

Bottom line: The submersible Lifeline is great for divers, and wed recommend it for those seeking an emergency VHF that can handle diving depths. But for its $299 price, sailors can get a top of the line, waterproof handheld VHF radio with GPS and DSC that provides the same key safety features, more functionality, and is more intuitive to operate. The top picks in our most recent VHF test (PS, July 2013) would all fit the bill.