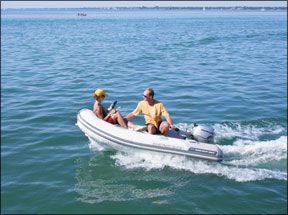 This Walker Bay RIB is a well-executed, but heavy, plastic inflatable dinghy. Its thermo-molded hull resists impact, wont chip like gelcoat, and is easy to clean, but it is not as simple to paint or modifiy as a laminated hull. Although the hull material itself is not particularly rigid, the design is surprisingly resistant to flex. The features in the deluxe boat are nice for a shore-based utility boat, but the lighter version, which we plan to include in our future test, may be better suited for a deck- or davit-stowed tender.

For the past several years, Practical Sailor has stuck to testing easily stowed inflatable dinghies from about 7 to 12 feet. These dinghies are light, compact when deflated, and more than capable of ferrying you and your crewmembers around.

Although rigid inflatable boats (RIBs) have become increasingly popular in recent years, it has been a while since we have published an extensive article on these boats.

In April 1, 1998, we splashed several 10-foot RIBs and came away with two top choices: the West Marine RIB-310 and Zodiac YL310R. In the July 15, 2000 issue, Practical Sailortested lightweight RIBs, recommending the Apex A-10 Light.

Since then, testing has concentrated on rollups or inflatables with panel or air floors. In December 2000, testers looked at 18 inflatable boats ranging from about 6 to 11 feet. In the small boat category, the West Marine RU260 rose to the top. In the 9-foot range,

In May 1, 2004 issue, Practical Sailor reviewed seven roll-up boats with inflatable decks and keels. The Zodiac Cadet 310FR ACTI-V was the top choice in that comparison.

Whew! Now that were caught up, we can address one of the latest entries into the field of RIBs.

We plan to carry out a full-scale comparison early next year.

Practical Sailor recently had the opportunity to evaluate the latest RIB from Walker Bay, the Genesis 270 FTD (Folding Transom Deluxe). Testers first used the dinghy for our 9.9-horsepower four-stroke outboards shoot-out (June 2007). Since that test, it has been used for a variety of tasks.

The Genesis line, released in 2005, offers three different sizes-the 340, 310, and 270-and two models, lightweight (FTL) or deluxe (FTD). The deluxe includes a fancy bench seat with stowage space, two cupholders, one handrail, and a bow area with stowage space. The oars on the deluxe are high-quality telescoping oars, and the boat has a double rubrail. If you plan to hoist your dinghy on deck, the light models, which are listed as about 9 pounds lighter than the deluxe versions, are the best option.

The Genesis boats, like all RIBs, provide the speed and handling that other inflatables lack. RIBs also offer potential for better steering and a more solid ride. Theyre capable of high speeds (15 to 20 knots) for such small boats with limited horsepower (8-15 hp). Their speed and handling means they can also double as sport boats.

Downsides: They don’t stow as well as soft-bottom boats, and theyre heavier. But they generally row better than soft-bottomed boats.

The good news is that most RIB manufacturers are working on these issues, and developing lighter and more easily stowed boats. One of the main competitive advantages of Genesis RIBs over other rigid-bottom boats is that when deflated, the transom is able to fold down flat, and although it does not fold like an air-floor boat, it does make it very low profile for storage.

The Genesis 270s hull is manufactured using high-pressure injection molding. A high-impact marine resin is injected into two stainless steel molds that are joined with an 82-ton steel press. The two thermoset plastic components become one. Walker Bay backs the hull with a 10-year warranty that covers cracking, splitting, and degradation of the material.

If there is a warranty issue with a hull, Walker Bay will likely replace it instead of repairing it. Its less expensive in most cases. The rigid hull (without tubes) costs about $390. Chris Carroll, Genesis business development manager, said some owners with severely damaged boats have turned to auto body repair shops for help.

The hull can be coated with bottom paint (Walker Bay recommends Interlux VC 17), but it needs to be properly primed for the paint to stick. The factory hull surface is so slick that it is fairly easy to scrub clean, but without routine cleaning, algae and barnacles will take root.

Hypalon is more expensive, but generally resists ultraviolet rays better. (It is also better in areas that experience acid rain.) It, therefore, has a longer lifespan and is recommended for warmer climates. PVC is somewhat easier to patch and repair but also more susceptible to degradation from chemicals and oils.

The joint between the transom and the tubes is a common failing point on inflatable boats. Walker Bay uses stainless steel hinges to join the two components. The watertight seal is accomplished with a gasket between the tubes and the entire hull, from the bow to the transom. The tubes can be removed completely from the hull.

The 270 is outfitted with three carrying handles (one at the bow on centerline and one on each corner of the stern) and a half-dozen grab handles (all from amidships forward).

Practical Sailor testers found that all of the handles were logically placed. There are also three stainless-steel lifting eyes-one at the bow and two on the transom. A nonskid coating covers the removable, four-section deck.

For such a small boat, the 270 packs an impressive amount of storage. The deluxe models removable bench seat has a removable storage tray, two cupholders, and one stainless-steel grabrail. A removable canvas pouch connects beneath this seat to add more storage, and the raised bow houses a small anchor locker.

Testers found the oars to be solid and easy to use. They were also simple to snap into their oarlocks. They can be stowed on the top of the tubes or inside the boat alongside the tubes. The two wheels on the bottom of the boat just forward of the transom allow one person to transport the boat with relative ease.

Practical Sailor tested the boat during our evaluation of 9.9-horsepower four-stroke outboards from Tohatsu, Honda, and Mercury.

Both the Tohatsu and Mercury pushed our test boat to a top speed of 17 knots with one 195-pound person aboard. With the heavier Honda, the boat topped out at 15 knots.

The boats integrated trim tabs are supposed to help the boat get out of the hole quickly and maintain a level running angle for good visibility. Our testers thought the boat managed fine in these areas, although there was a noticeable bow rise with just one person aboard. As the boat gained speed, it leveled out on a plane.

There was a 1-foot chop on Sarasota Bay, Fla., with a 5-knot breeze on the day of testing. The boat rode relatively dry. It tracked well, maintaining its course without skidding. And it felt stable at a cruising speed of about 10 knots. At 17 knots, any small boat in this category gets a little twitchy with only one person aboard. The slightest movement of the tiller causes drastic course changes as the deep-V and hard chines dig in. On the plus side, these same hull features help reduce pounding and keep it tracking through corners.

With only a single bow eye for towing, the Walker Bay tends to zig-zag at speeds over 5.5 knots. Some dealers offer optional eyes on the tube for attaching a bridal for towing, which should help. Installing bridle eyes in the hull is another option. Neither modification is easy. Attaching the towing rope higher on the mothership may also help the boat track better while towed. There is room for improvement in this area.

The Genesis is a well-executed, but heavy plastic RIB. Its thermo-molded hull resists impact, wont chip like gelcoat, and is easy to clean, but it is not as simple to paint or modifiy (this includes patching holes or adding hardware) as a laminated hull. Although the hull material itself is not particularly rigid, the design is surprisingly resistant to flex. The features in the deluxe boat are nice for a shore-based utility boat, but the lighter version, which we plan to include in our future test, may be better suited for a deck or davit-stowed tender.