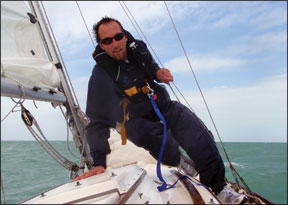 I singlehand frequently in all conditions and always wear a tether, but I was wondering: What happens when you go over the side on the tether? Are you immediately fighting to keep your head above water? Can an average person get back on board?

I’m generally using a windvane or autohelm, so I can’t expect the boat to head up anytime soon. I use a Lirakis harness and have good hooks on both ends of the tether.

The short answers: Yes, you are immediately fighting to keep your head above water, and no, the average person can’t get back on board. There are exceptions, but it is best to assume that if you wind up dangling in the water from your tether while the boat is underway, the odds are stacked against you. During tether testing, our testers found that drowning is a very real risk at speeds as low as 1 to 2 knots. Thus, the importance of a tether that can be unclipped under load.

Ideally, the jackline-tether setup should, at the very least, keep your head above water. A better arrangement prevents you from going overboard at all. That is why we suggest that the anchor points for jacklines be several feet inboard of the stern. Likewise, whenever possible, it is preferable to clip to the “high-side” jackline when working on deck.

For more important details regarding jackline installation, refer to our April 2007 article, “Sailboat Jackline Test,” available online at www.practical-sailor.com. Another helpful report is our January 2007 safety-tether test. That test points out that the non-locking carabiner-type clips can disengage themselves from padeye clip-in points.

Sadly, even when there were other crew on board, sailors have drowned while being dragged by their harness and tethers. (One such tragic incident was the 1999 Double-handed Farallones Race. Read about it at www.ussailing.org/safety/Rescues/1999_DH_Farallones.htm.)

For an idea of the forces at work, see the photo with the MOB letter of Rescue Randy, a dummy used in Coast Guard MOB drills, being dragged alongside a boat. The picture gives you an idea of the difficulty crew will have in getting back on board without help, particularly on a boat with high freeboard. One thing to note is that if the MOB is wearing an activated inflatable PFD, they will have a harder time scrambling back on board. Crew should know how to deflate the vest quickly or have a knife handy.

Nicely done article on cleats and their installation (or lack thereof) in the March 2010 issue. I check the backing plates on my Sisu 26 at least twice a year. I gave up on aluminum (it WILL corrode), stainless (may not be as advertised), and the like. I now use strips of purpleheart (a very dense wood) glued at right angles over each other to form custom backing plates for the cleats and Samson post on my boat.

While you need a hacksaw to cut the wood and you have to drill every hole, the wood takes glue nicely. I also use stainless-steel “fender” washers to spread the load on the plates.

I have a few thoughts to share regarding MOB recovery (Practical Sailor, January 2010), as the owner of a somewhat larger vessel. I sail the 62-foot schooner Inland Seas (www.schoolship.org) with a crew of five, plus five to six volunteer instructors and 30 students (on day trips). We regularly practice MOB drills with students aboard and can usually recover our “victim” in 2 to 3 minutes.

Of course, the best action is prevention. Make sure anyone on deck is wearing proper shoes and, in adverse conditions, is wearing a harness and PFD. At night, all crew should be equipped with PFD lights and a waterproof flashlight.

The more we practice MOB drills, the better prepared we will be for an incident we hope will never happen during our sailing careers.

I was just wondering why you did not include the Hella LED tri-color with anchor lamp in your report in the February 2010 issue?

I have to replace my ancient masthead tri-color and am considering the Lopolight and Hella units, neither of which have a local retailer. Any information you have would be welcome.

At the time our test of LED tri-color bulbs and lanterns began, Hella’s new NaviLED Trio Tri-color Navigation lamp (www.hellamarine.com) was not yet available. We plan to test it and Aqua Signal’s (www.aquasignal.net) new LED tricolor for an upcoming report. The Lopolight model 2000-005 (www.lopolight.com) was the Best Choice among LED tri-color lanterns in the February test. Like the Lopolight ($500), the units from Hella ($500) and Aqua Signal ($380) are expensive. The Hella comes with a seven-year warranty, longer than any of our other tested products.

I’ve used the Navionics app for New Zealand, Tonga, and Fiji with excellent results on the iPhone 3GS—and at $15, I couldn’t resist getting the Australia charts as well!

I found the app to be fast, clear, and accurate with easy zoom. I have a stable and protected platform that overcomes the very touchy quality. For protecting the iPhone, a snack-size Ziplock works, and the setup sure beats my 7-year-old Raymarine chartplotter.

We appreciate your “from the field” feedback. We tested the Navionics and other iPhone apps recently. For the full report, check out “iPhone Nav Apps” in the May 2010 issue.

The RFI results in your February 2010 report on LED tri-color nav lights were disturbing. Since many of these will be masthead mounted, where the VHF antenna often resides a few inches away, the interference is a critical component in the selection of hardware. I certainly would not want to give up any VHF clarity.

I clean and polish the topsides of my Norsea 27 each year before sailing season begins. The boat gets lots of UV rays way up at 8,400 feet. Last time, I polished it using Practical Sailor-recommended Collinite No. 885 Fleetwax.

I groaned over the application process with a big buffer as the job’s particularly challenging for those of us with simulated lapstrake hulls.

I ran my finger down the hull here and there and found it to be oxidation-free, clean, and glistening. I fetched the hose and simply washed it all off with water and a carwash mitt. The boat gleamed with nothing on it but clear, beaded-up water. I’ll never buff off good polish again.

Do you have any experience with an Eccotemp tankless water heater model L5 or L10? The L10 looks better for the coastal cruising I am intending with occasional use in mild climate (spring-summer in New Jersey). It’s inexpensive enough that I think I will try it, unless there are horror stories.

We unfortunately are not familiar with that product. We do have experience with a similar device, the Wolter Water Heater. PS tested it (May 15, 1993 issue) before it was pulled from the market due to high levels of carbon monoxide. Several other similar products have been recalled in the more recent past, including the Power Vent by Paloma and Rheem-Rudd (2007), which was pulled as a carbon-monoxide poisoning hazard.

We cannot recommend this type of water heater for onboard use. The potential risk of carbon-monoxide poisoning is simply too high and too real. Multiple boater deaths have been attributed to tankless water heaters. Because a boat head is tightly sealed, compared to a home, the carbon monoxide is more likely to become trapped. That said, you will find them on some European boats. It is buyer beware.

A product that I think is worth mentioning to your readers is the cleat cover. We use cleat covers to prevent the spinnaker and lines from getting caught on them when we sail. I have saved untold amounts of money by not ripping my spinnaker on cleats. Doyle Detroit (www.doyledetroit.com) has been selling them for years. They run about $85 per set.

The picture of the failure discussed in Gear Graveyard in the December 2009 issue (page 5) is not perfectly clear. However, using a magnifier to view the photo (reprinted here) led me to the conclusion that the failure is a fatigue failure rather than shear failure as noted. To assign fatigue, the break will show a small portion of the surfaces at the break appearing “polished,” and the remaining portion will appear grainy. This is typical fatigue failure evidence.

The word “shear” was used generically in a caption accompanying the article. As mentioned in the text, there was surely fatigue involved, and from the looks of it, crevice corrosion as well. A key element in the failure was clearly the stress riser caused by the set pin that keeps the screw from turning. To insert the pin, a considerable amount of metal was removed, significantly weakening the screw. This also may have provided an avenue for corrosion.

Regarding your article on cleats and chocks in the March 2010 issue: The reason cleats on multihulls are sometimes positioned so oddly and so poorly is to satisfy catamarans’ unusual tie-up requirements. Often, lines need to be redirected so that they will not strike the tender on davits.

On my PDQ, the solution is simple. The cleats are located on a strong portion of the deck in a common outboard location, just inside the rail. When I need to tie up with crossing lines, I use a secondary tie point to deflect the line, rather like a flexible chock.

I have been using this arrangement for a season and have found it to be both flexible (accommodates many tie-up options) and reliable. I add chafe gear where the line runs over the deck if I will be in the same place more than overnight. It would be adaptable to any size boat. My blog includes some details: http://sail-delmarva.blogspot.com/

This arrangement looks like it will work in normal docking conditions, provided the installation is capable of withstanding significant loads in the expected direction of pull and that adequate chafe gear is used to minimize the inevitable chafe between the chock and dockline.

I read with particular interest the March 2010 article on cleats as I have seen more broken cleats in the last two years than I knew could exist. I suspect the culprit is cheap quality.

With a cleated eyesplice photo in that article, you commented “using an eyesplice here defeats a key advantage of a cleat: allowing a line to be cast off under load.” I have always used the eyespliced end of a dockline in the exact way pictured and can’t imagine tethering my 19-foot “baby” any other way.

I don’t take the line off the cleat all year at all. There are two cleats on each side of the boat and four dock lines in place, always ready to go.

I can’t imagine this working with really large dock lines, but it certainly has worked well for my 19-foot boat for the last six years. Do you see any problems with this?

In calm weather situations, your solution would work fine. The main point of the caption for the eyesplice photo was that you can’t untie an eyesplice under a heavy load. It seems fairly obvious, but one look at the havoc wreaked when the Category 5 Hurricane Wilma ripped though Fort Lauderdale Boat Show in 2005 indicates it’s a point worth repeating.

It becomes more of an issue when securing the boat for a serious blow when you intend to stay on board. Once the storm sets in, if you need to adjust lines for any reason, having eyesplices on either end (particularly on the boat end) introduces more problems, and possible risk. Ideally, you should be able to adjust the lines from the boat and the dock.