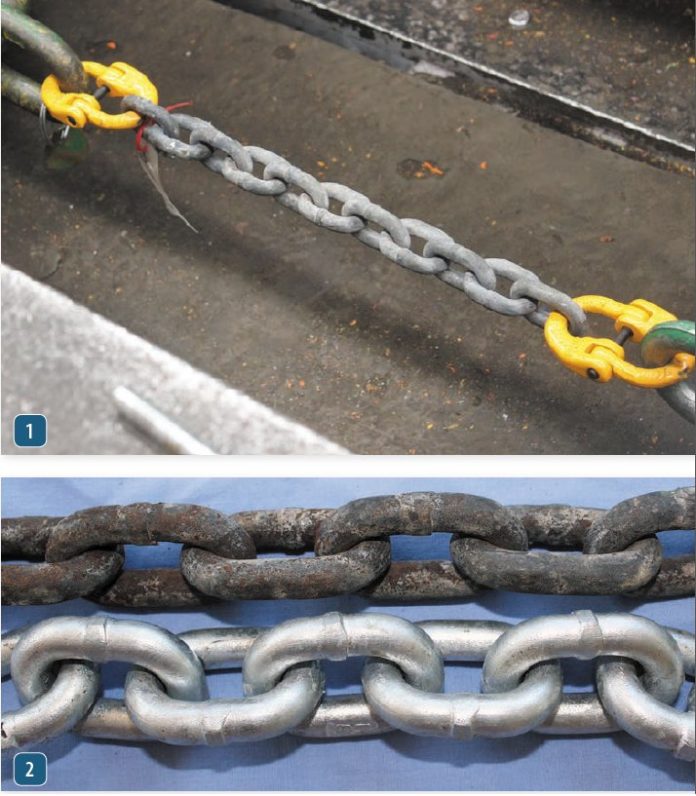 As high tensile G70 chain becomes more prevalent in the marine market, Practical Sailor has been busy testing the limits of this material, which has been used for many years in other industries. One question we have raised in the past is whether G70 chain can be safely regalvanized (see PS June 2014, Making Sense of Marine Chain Standards). Chain is expensive and regalvanizing helps to extend its life. If G70 chain can’t be regalvanized, as we have suggested in the past, this needs to be factored into the initial cost.

One concern is heat. The heat required for re-galvanizing, according to some sources, can reduce the strength of the chain by about 20 percent, returning it closer to the strength of G43 chain, which sells for about 25 percent less than G70. Additionally, there is a worry that the acid washing process commonly used to prepare a chain for galvanizing will cause embrittlement-making the material more brittle and vulnerable to failure.

However, after speaking with experts and carrying out successful experiments galvanizing other high-tensile hardware such as chain hooks with no apparent ill effects, we began to wonder if some of the concerns about G70 chain were overblown. Before we get into the results of our tests, we need to be clear-there are still too many unknowns about regalvanizing G70 chain for us to recommend it at this time. If your G70 chain has lost its protective galvanizing, we would bite the bullet and buy new chain, particularly when considering the small diameter of G70 chain. Your ground tackle is your insurance policy.

For this test, all of our galvanizing was conducted at Sydney Galvanizing (in Sydney, Australia) a family owned business. We specifically chose this company on the recommendation of Galvanizers Association of Australia. Sydney galvanizing has a centrifuge which prevents the chains from bonding into one solid lump during the galvanizing process-although this was unlikely to occur with our short sample sections.

However, since we were testing the effects of the galvanizing process-the temperature, especially-we went ahead and tested it for strength. The chain was stretched to its ultimate breaking strength at Robertsons in Newcastle, Australia, and the results were encouraging. The chains original breaking strength was 15,938 pounds and the reheated, partially regalvanized chain had a breaking strength of 15,834 pounds.

Encouraged, we decided to test three more lengths of nearly new high tensile chain after removing their galvanized coating and regalvanizing them. The samples included hot-dip galvanized 5/16-inch Peerless G70, hot-dip galvanized 8 mm (5/16-inch) Maggi A7, and Armorgalv-treated 5/16-inch Peerless G80. Hydrochloric acid was used to strip the protective coatings from these samples, which were then dipped in flux and regalvanized. Our concern in this case was that the acid cleaning would cause hydrogen embrittlement, possibly resulting in premature failure.

Sydney Galvanizing recommended thorough sand-blasting followed immediately by hot-dip galvanizing, but that was not practical for this test, so we relied on acid cleaning followed by hot dip galvanizing. The chain segments were then tested at Robertsons to ultimate breaking strength (UBS).

We were impressed with the results, but some worries persisted. The mechanisms behind embrittlement are varied. In some cases, the deterioration in strength may not be immediate. One of the processes that lead to embrittlement involves hydrogen ions (from acid washing) on the surface of the steel migrating into the microcrystalline structure. It is possible that this process takes weeks or months, and the interval between the re-galvanizing and the breaking strength test was only a few days.

Nevertheless, based on the results, we would conclude that there are safe ways to regalvanize G70 chain. Its still not a practice we would endorse – but it appears possible.

As part of the investigation into regalvanizing G70 we also looked at re-coating our G80. We submitted two short sections for regalvanizing through the Armorgalv process. The short sections were sand blasted and coated with a 100-micron coating at 700 degrees F (The temperature for Armorgalv is not as high as hot-dip galvanize which requires about 800 degrees.). We then tested for UBS. Strengths of the acid treated and recoated chain were within 0.5 percent of the original strengths.

As with the G70 experiment, we are not suggesting that anyone consider recoating a G80 chain. This is unfamiliar territory, even among those who are experts in the field. However, it appears that the possibility of safely renewing G70 and G80 chain is not too far away. With high tensile chains selling at double digits per foot, having a product that can be recoated would make it more appealing to the penny-pinching sailor.

If you wanted to experiment with regalvanizing G70 chain, or any other high tensile chain we would recommend you carry out your own testing and work only with a qualified expert in galvanizing this material.