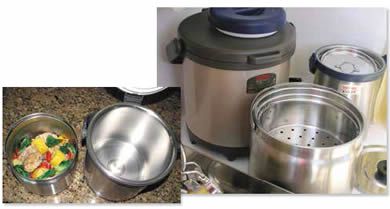 Our 38-foot catamaran, Josepheline, was built by Lightwave Yachts near Brisbane, Australia. Josepheline draws 3 feet, 6 inches and has a 22-foot beam. It is a fairly conventional design: mini fin keels, two forward queen berths under the bridgedeck, a double berth aft to starboard, and a decent sized shower and head located aft in the port hull. Shes stood the test of time-and distance. Weve cruised about 35,000 nautical miles aboard Josepheline.

Some of the changes we made from what was standard on a catamaran 14 years ago have slowly become standard on most cruising cats now. Other changes, although successful for us, are still considered options-and others still put us squarely on the fringe. The biggest changes we made were to the sail plan and sail controls. Most importantly, we needed a reliable reefing plan for the mainsail. The original arrangement made little sense. The first and second reefing lines led to the cockpit, but putting in a third reef required someone to go forward. Rather than adding a lot of new hardware needed to lead the third reef back to the cockpit, we just rearranged the lines so that the first reef was the only one that couldnt be set from the cockpit.

Once we were comfortable with our mainsail reefing, we decided to replace the furling, self-tacking jib with a 150-percent furling genoa. This sail turned out to be far more effective in the light to moderate winds we typically encountered in our cruising area. We kept the smaller sail and still use it, maybe once every two years, if a windward passage with 30 knots is anticipated. For storms, we have a storm jib that sets on an inner forestay, with a Highfield lever.

One of the biggest challenges with the genoa upgrade was installing a track to accommodate the new genoa. Over the long haul, there can be some serious downsides to having aluminum backing plates built into a fiberglass deck. Should any water become trapped, resulting corrosion is invisible.

In our case, though, this construction approach made it easy to add the new genoa track and blocks. We simply tapped into the aluminum with long, 8-millimeter, stainless-steel bolts, making sure the track was well sealed and that the stainless-steel bolts were well insulated from the aluminum backing plates. Tef-Gel (www.tefgel.com), Duralac (www.llewellyn-ryland.co.uk), and ECK (www.eckcorrosion.com) are some products that Practical Sailor recommends for preventing galvanic corrosion between bolts and threads of dissimilar metal. To accommodate the new sheets, we installed only one additional winch, using a turning block to lead the port sheet to the same winch, making tacking a one-person operation.

A major concern was electrical power. Having twin Volvo MD2020s gives us two 60-amp alternators, but we were not keen to run the engines solely to charge batteries. Not only does this waste energy, it can be bad for the engines over the long haul by increasing the carbon build-up in the cylinders and valve seats. We initially installed 240 watts of flexible solar panels; within three years, we added another 100 watts. The panels sit on the cabinroof, so we have room for more, but it comes down to expenses.

The total solar panel output of 350 watts isn’t enough, so our other source of power is an Aqua4 AeroGen, a convertible wind generator/water generator.

The AeroGens generator output is adequate, but because we often sail downwind or off the wind, the apparent wind is often very light. As a result, windpower generation underway is never very high. At anchor, it is often better, but since we tend to choose anchorages that are sheltered from the wind, we don’t get the sort of amps that windpower advocates tout.

The HydroGen part of the system (see PS July 2013 online) has been superb. When underway and averaging 8 knots (10 knots is not uncommon), we can produce enough power to run the whole yacht, autopilot, radar, fridge, freezer, and navigation lights overnight. Once we get over 10 knots, the trailing impeller skips, and power production drops off. A trailing hydrogenerator can be more of a nuisance on a monohull (for one thing, it can interfere with trolling a fishing line), but on a catamaran, we can troll off one hull and produce power off the other.

When we bought the Aqua4 AeroGen, it was made by LVM in the United Kingdom. The company is now owned by the global marine manufacturing company ITT. ITT discontinued the AquaGen (the water generator component), but two companies in the United Kingdom still make hydrogenerators: Ampair and Duogen. If we were buying again, we would seriously look at the new Watt and Sea hydrogenerator. Capable of being lifted out of the water, this is the same type of hydrogenerator used in some ocean races (see PS September 2011 online).

The investment in a hydrogenerator needs to be balanced by the fact that you spend most of the time at anchor, where wind and solar win hands down. In addition, we are unlikely to buy a new wind generator for Josepheline, but if we change our minds, we would buy one with the highest output possible.

We catch a lot of fresh fish, so power for refrigeration and deep freeze is a major issue on Josepheline, particularly in warmer climates. Our standard installation was a Danfoss fridge and an Engels freezer. The compressors for these units are housed in separate lockers, and the air in these lockers got warm even though there was a vent for each. To help cool the lockers, we added ducting and used 4-inch, low-amp computer fans (about 0.1 amp) to extract warm air and bring fresh cool air to the lockers. We used standard 6-inch flexible ducting, the same type used for a stove or dryer vent. The ducting can be led to vents in deck lockers; we used our anchor locker. As with any deck or locker vent, these should be placed high above the waterline and have dedicated caps, or some other way to prevent any water ingress.

Our original electronic equipment was Raymarine branded. We installed the chartplotter at the navigation station down below, out of concern for the effects of continuous exposure to salt air. However, this turned out to be inconvenient when we wanted fine detail during near shore navigation, or when entering a difficult anchorage. Our Raymarine radar eventually became irreparable, and we replaced it with Simrads 3G Broadband (See PS December 2012 online). This demanded a compatible chartplotter, and we opted for Simrads NSS (see PS November 2012 online). Today, we would opt for the B&G Zeus 2 (see PS July 2013). This time, we mounted the plotter at the helm, but on an arm that could be swung down and viewed from the saloon. Although the internal GPS of the NSS can take longer to get a position fix when it is swung down inside the boat, it still works.

Since most internal alarms on electronics are not loud enough to reach every part of a cruising cat, especially when underway with power, we have installed a piezo electric alarm close to the berth pillows. Just about every chartplotter makes it easy to wire these remote alarms. We also installed Navicos GoFree to our iPad (see PS March 2013), which means you can view and control any of the Navicos displays from anywhere on the yacht.

Because we live on Josepheline for months at a time in some remote locations, a watermaker has been a welcome addition. We use a Spectra Ventura 200T (see PS February 2013 online). We often have visitors, including our grandchildren, and the watermaker lets us enjoy showers without worrying about where the next dockside spigot lies. Another unusual change we made was to have an independent propane-fired water heater (using the same gas cylinder as the galley). This is the sort of heater you might find in a trailer, RV, or small apartment in Europe, Australia, or South America. This provides instant, on-demand hot water.

Unfortunately, because of the risk of asphyxiation associated with an open flame in an unventilated space, caution is needed. As Practical Sailor has documented in the past (see PS February 2014 online), these on-demand water heaters arent very popular on U.S.-built boats. This is not the issue in Australia. Well aware of the risks, we are obsessive about ensuring the space is well ventilated when the heater is in use.

Another unconventional item is our dinghy. While most people opt for either a hard, inflatable, or rigid-bottom inflatable (RIB) dinghy, weve been quite pleased with our 10-foot, 6-inch folding Porta Bote (see PS November 1998 online). One person can carry it above the high-tide line, and it hangs neatly off our davits. When we make long passages we can fold it up and strap it down to the deck. Since it is slightly flexible when assembled, it is much more sea kindly in a chop than our previous hard dinghy. It rows far better than an inflatable, and for long distances, we have a 5-horsepower outboard.

Over the years, weve found several conveniences that have greatly improved our life aboard. Its never easy to find space for folding bikes (see PS February 2006 online) on a boat, but the newest models take up less space than ever before, and weve generally found them to be worth the space they occupy.

While bikes are a convenience, cookware is a necessity, and, except for the sometimes balky handles (which can get stuck in place), were continually impressed with our Magma nesting cookware (see PS April 2009). We have supplemented our set with a steamer, a rather large wok, and a whistling kettle. Another galley success has been the Thermos Shuttle Chef-an insulated slow cooker. We carry two complete units (see PS September 2012 online).

Because we seldom spend much time at the dock where shorepower is available, the microwave hasn’t seen much use and the four-burner stove was a mistake. The burners are too closely spaced for larger saucepans; we would have been better choosing a larger three-burner. While some people don’t see the need for a oven onboard, we would never be without it. There is nothing quite like the smell of freshly baking bread at 3 a.m.

There are as many approaches to the cruising life as there are cruisers, and we don’t claim our solutions are the best for every sailor. Monohull owners, for example, will encounter more trouble finding space for things like solar panels. But on the whole, weve found that it pays to stray from the beaten path when it comes to some categories of equipment. As long as you do your research, the products that others deride as useless might be perfectly practical for your unconventional needs.