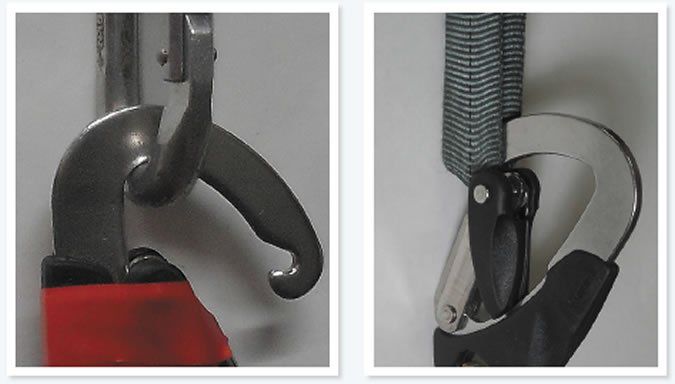 Testers used lab and field tests to evaluate each clips functionality, strength, and durability. After inspecting several sailboats to evaluate potential caribiner-benders and how we might replicate the loads, we returned to the lab and began pull-testing carabiners. The test data in the accompanying table resulted from tests that were modeled after those used to verify CE (European standard) and UIAA (climbing gear standards) specifications. All pull tests were carried out at a steady pull rate of about 2 inches per minute. These included the following tests:

Open gate (UIAA 121) – The gate is taped open and the load applied from eye to basket in the normal direction. Carabiners are significantly weaker with the gate open.

Transverse (UIAA 121) – The load is placed from the spine to the inside of the gate by positioning a pin on each side. This is not generally applicable to sailing carabiners with a captive eye.

Crossloaded over an edge (UIAA 121 type K) – The carabiner is clipped around a post and then pulled sideways, over an edge. This test simulated what might happen if a snap hook is trapped under a deck cleat. We tested carabiners that met the Type K dimensions using a jig meeting the standard measurements. The non-Type K carabiners, however, were too small for a proper fit on the jig, so we reduced the diameter of clipping point from 16 mm to 12 mm and reduced the overhang dimension from 27 mm to 20 mm.

Nose hook – A webbing loop was placed around the carabiner nose and a pull applied from the captive eye. Although it is unlikely for a carabiner to be hooked in this way, it does happen, sometimes as a result of the gate being forced open or partial failure in some other mode followed by the load sliding along the basket to the nose. Although this is not a standard test, it is a good measure of robustness.

The carabiners were tested for their magnetic properties and corrosion resistance as required by the ISO 12401 standard for sailing tethers. To evaluate ease of use, an experienced sailor clipped the carabiners on and off a 1-inch webbing jackline barehanded as quickly as possible for one minute, fully locking and unlocking the carabiner during each cycle. Multiple testers graded them for ease of use while barehanded, wearing moderately insulated gloves and wearing thickly insulated ski gloves. We also took them sailing, clipping into jacklines and hard points both bare handed and with the medium insulated gloves.