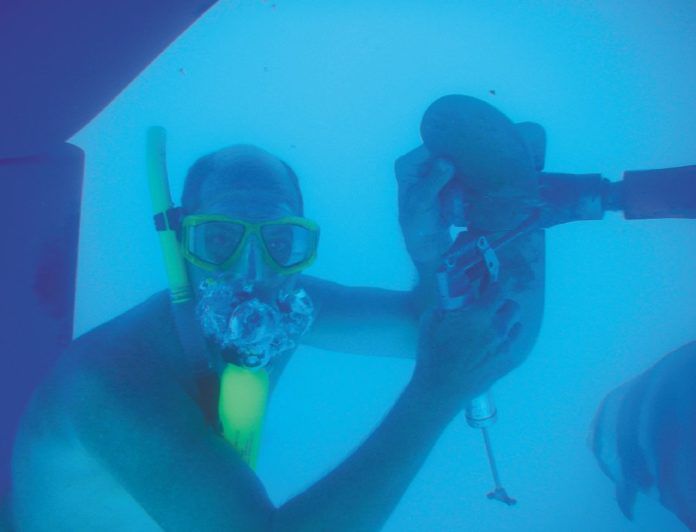 In general, many cruisers prefer the freedom of snorkeling to scuba diving, yet there are situations when extending the time you can spend underwater becomes a safety issue.

Scuba gear is useful for clearing a fouled prop, freeing stuck anchors, replacing zinc anodes, making underwater repairs, and of course, sightseeing, however, it is heavy and cumbersome, particularly if one is working in the vicinity of the prop or rudder in any kind of a seaway.

Hookah-type alternatives to scuba such as SNUBA, Brownies Third Lung are an option but you are then tethered by and at times limited by the length of the air hose.

Another alternative is using a small or ultra-small scuba tank which offers autonomy and freedom.

Several years ago I decided to eliminate my scuba tank which was stowed under the V-berth, in order to make room and save weight for the installation of a bow thruster. In a dive shop I found Spare Air, a very small scuba tank and regulator sold as an emergency back-up for scuba divers. Of the two sizes available, the larger (3.0 cu. ft., $320) is preferable. It comes with an adapter allowing it to be filled in 45-60 seconds from a scuba tank. As I no longer have a larger tank aboard to fill the Spare Air from, I have it filled in dive shops. About half the time, the shops have refused payment for such a small amount of air, and the other half have charged $10 or less.

The amount of floating lines plus cargo and fishing nets on the worlds oceans is alarming. During one Atlantic crossing we had to heave-to and get into the water four times to untangle nets and lines from our rudder and prop. Usually I can hold my breath long enough to clear the prop or rudder, but there have been several times when Ive needed to use my Spare Air.

A few years ago in Fiji, changing wind and currents caused our anchor chain to shift from the sandy area where wed dropped the anchor to instead become wrapped around a mushroom-shaped coral head. With excellent water clarity in the 70-foot depth, I snorkeled over the anchor and directed our helmsperson to let out a little more chain and slowly motor around to unwind the chain. This only caused the chain to become more tangled. Using the Spare Air, I pulled myself hand-over hand down the chain, physically lifted the chain free of the coral head and just made it back to the surface. This was only time I wished the Spare Air had a little more capacity.

At recent boat shows Ive seen the very impressive package that Mantus (same company that makes the anchors) is selling containing a 13 cu. ft. aluminum tank, backpack, regulator, and spare regulator all in a compact, waterproof storage backpack for $600. The advantage of this package is four times the air capacity giving 15 – 20 minutes of working time at 30 feet, but the drawback is a little more bulk and weight; 15pounds vs. 2 pounds for the Spare Air.

Ocean racers take note: Following the death of Andrew Simpson when the Swedish catamaran capsized in the last Americas Cup, crew members started carrying Spare Air as part of their safety gear. If dealing with escape from a capsized boat (monohull or multihull), Spare Air could prove useful.

It is essential that anyone using a compressed air cylinder underwater first completes a dive course. Holding ones breath while ascending after having breathed compressed air can be fatal, even when coming up from relatively shallow depths. Any scuba tank (including Spare Air) needs annual visual inspections and a hydrostatic test every five years.