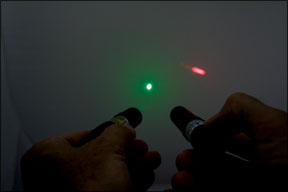 When we evaluated Greatland Laser’s latest laser flare for this product update, it got us wondering whether visual distress-signaling devices like flares, mirrors, and the laser still deserve a place in a sailor’s ditch bag, given all the electronic signaling gadgets—PLBs, EPIRBs, MOB alarms, SPOT Connect—available in this digital age. Why bother firing off a flare when you’ve already set off your EPIRB or alerted your SPOT contacts? With today’s sophisticated search-and-rescue systems in place, isn’t rescue imminent once the EPIRB’s calling for help?

Unfortunately, that’s not always the case, and just as we recommend keeping print charts on hand in case your chartplotter craps out, we also feel that maintaining an array of distress-signaling devices is the most practical approach to safety preparedness.

Made in Alaska, the Rescue Laser Flares look like mini-Maglites with anodized aluminum bodies, measuring less than 5 inches long and 7/8 inches in diameter; they weigh a scant 3.3 ounces and are waterproof to 80 feet. The Laser Light is just over 3 inches long and weighs 2.2 ounces. All three have the same signaling capacity, but they differ in signaling time, distance, and warranty.

The Rescue Flares look similar to a standard laser pointer; however, a lens converts the LED beam into a projected line rather than a pinpoint. Signaling with the laser using the same method used to operate a signal mirror—the user brackets the target rescuer in the “V” of two fingers and slowly plays the beam back and forth—turns the line into a wide vertical swath that appears as a brilliant flash from a distance.

Like the Red Rescue Laser, the Green Rescue Laser is powered by one lithium CR123 battery, but its runtime on a single battery is a fraction of that of the red laser flare: 5 hours versus 72 hours. This is due to the green laser diode’s larger power appetite. In PS tests, the green laser’s battery exceeded the company’s five-hour claims by more than 10 percent.

In our 2004 ground-to-air tests of the Rescue Lasers, testers were able to see the green laser’s beam from up to 30 miles away (without night-vision goggles), the maximum distance Greatland claims the laser is visible at night. The green light was more visible from greater distances than the red Rescue Laser (22 miles), and it was easier to spot than the red laser and incandescent flashlights. It also beats out strobes for visibility distance; in our July 2001 tests of personal strobe lights, PS found that the lights were not easily visible, even at distances of 1 to 2 nautical miles.

Testers found that because the green laser’s beam is easily visible in the atmosphere, no special aiming technique is necessary and the green Rescue Flare can be used effectively with one hand, an important feature, in our opinion.

Note that in our tests, the green laser was not visible at any significant distance in bright sunshine, and while Greatland claims it has a 3- to 5-mile range in daylight, we do not consider it a reliable daytime signaling device.

Lasers are directional lights and operate on line of sight; the fan of light must cross a rescuer’s line of vision. Environmental factors such as fog, large waves, or a shoreline could reduce the distance a beam can be seen. Traditional aerial pyrotechnic flares are brief, but they can be shot above wave height and are visible beyond line of sight.

Unlike standard laser pointers, these are not toys; they are intended for emergency use and sighting reflective material. Users should be careful of where and when they use them.

Compared to other visual distress signals, the Green Rescue Flare is an impressive tool. Its exceptionally brilliant light can be seen from greater distances than red laser flares, flashlights, and strobe lights; its signaling capability lasts hours rather than the minutes an aerial flare lasts; and unlike pyrotechnic flares, it is compact, can be re-used, doesn’t expire, and can be carried through airport security. The downsides of the green flare include its battery life, its hefty price ($250), its line-of-sight limitations, its ineffectiveness in daylight, and the fact that green is not a universally recognized color of distress.

The Rescue Laser is by no means a replacement for position-locating devices, or even aerial flares, but adding it to your ditch bag adds versatility to your survival kit. If we could afford it, we’d have one of these tethered to every PFD and foulie jacket on board. 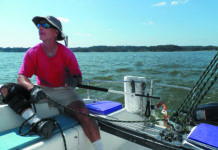