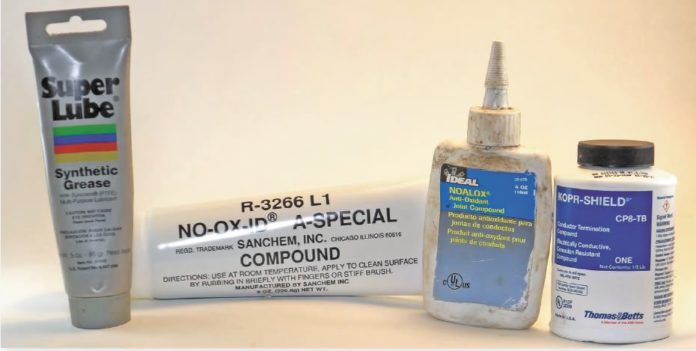 Many marine installations call for dielectric grease to seal out moisture and prevent oxidation at electrical connections. During the course of our multi-part reporting on greases, several readers asked if a conductive grease would be better for these connections. We have reviewed several conductive greases (see Marine Wiring: Are the Pricey Options Worth the Cost? Practical Sailor, December 2010), testing their ability to protect wires and terminals for extended periods in a salt spray chamber, but we did not look specifically at the claims made by some non-conductive greases.

Conductive grease were originally developed for aluminum wiring connections, but most wires and connectors today use more corrosion-resistant alloys. Boats have few if any aluminum terminals or unions.

Another application of conductive greases for protecting high amperage switches, where they lubricate and-in theory-reduce damage from arcing. In fact, most switch vendors advise using dielectric grease. In reality even conductive greases and joint compounds behave to some degree as insulators, with resistance of more than a million of ohms per millimeter.

Both dielectric and conductive grease are recommended by equipment manufacturers and marine professionals, so we tested both. Super Lube Dielectric Silicon Grease made by Synco Chemical Corporation was the sole dielectric grease tested. In the waterproof grease class, we tested Green Grease from Omni Lubrican’ts, and Lanocote from Forespar. (Super Lube Synthetic Grease, though not lab tested, is included in the table for price comparison). Our conductive grease group included No-Alox from Ideal Industries, No-Ox-Id made by Sachem, and Kopr-Shield made by Thomas and Betts.

Our test used the same protocol as our most recent static corrosion test (Winch Grease Corrosion Tests, PS, October 2016), using only a copper/solder pairing. For more details, see How We Tested.

While most greases emphasize lubrication, conductive greases focus on corrosion protection by keeping out water and oxygen. The products often use fine zinc or copper dust to help seal off connections and act like the galvanized coating in your chain, scavenging oxygen and directing corrosion away from the joint. In practice, the metal particles don’t improve the electrical connection, but they can help shield against the moisture and air that lead corrosion.

We suspected this approach to fighting corrosion might be a problem in a saltwater environment, but we didnt realize the effect would be so obvious. Nearly all of the conductive greases we tested actually made corrosion worse than no coating. Our testers concluded that the metals in these greases actually increased galvanic corrosion if there is seawater present. Given these results, we now question the wisdom of adding any dissimilar metal into an electrical connection.

As we pointed out in our 2010 report on wiring, nearly all marine-grade wiring is tin-coated, so inserting a more noble metal (copper in the case of Kopr-Shield) makes little sense. No-Ox-ID does has no metals. But what about improved conductivity? Kopr-Shield and others cite the National Electric Code in their promotional material, but we could not find any quantitative test data suggesting that conductive grease does anything to improve a clean, tight joint. And we could find no improvement in our tests.

In fact, all the evidence indicates that when we make a proper electrical connection the grease is pressed out of the way and the connection is metal-to-metal. Although we did not test for this, conductive greases might also reduce signal strength in radio equipment; coaxial cables used in antenna connections, in particular, should be kept clean and dry. These greases are also bad choice for multi-pin connectors, where they might create a short circuit. This is why marine electronic equipment vendors traditionally recommend dielectric grease-it is more forgiving.

Dielectric means that it does not conduct electricity, so it would seem counterintuitive for use in an electrical connection. In fact, a dielectric grease is perfectly acceptable for most electrical connections. You want something that will seal out water and air, preventing both galvanic and general corrosion. In crimps, screw-on connections, and even most plug connections, the clamping force pushes the grease out of the way, settling in micro-crevices and around the outside of the connection where it displaces and keeps out air and moisture.

Like most silicone greases, this product from Synco Chemical displays very low conductivity. It has no anti-corrosion additives, which resulted in its slightly lower anticorrosion performance. Testers noted heavy oxide coating on the solder sample in our test. On the other hand, it will not bleed current, so is a good choice for spark plug boots, multi-pin connectors, and thinly applied to antenna connections (wipe on, wipe off).

Weve tested the corrosion-fighting abilities in a wide range of waterproof greases that are not specifically designated as dielectric, although they almost surely offer some insulating properties. Weve even used these on our test boats for electrical connections, without any issues. Because this test focused on conductive greases for electrical connections, and our past grease tests have covered this category well, we included only one waterproof grease in this round.

A standout performer in our waterproof grease and winch grease testing, we have used this product from Omni Lubricates on terminals for decades. Although it is neither dielectric nor conductive, it resists being washed-off and excels at fighting corrosion.

Very similar to No-Ox-Id Special A, weve used Forespars Lanocote for decades with no failures. It is somewhat messy, but tenacious. For wet areas, apply a thick coating to terminals and bolts, but use more sparingly on interior connections.

Bottom line: Recommended for general use.

We looked at three different conductive that claim to protect electrical connections. Although some of these products are not specifically designated for marine use, they are commonly used on boats.

A blend of a synthetic oil base and fine zinc particles, this product from Ideal Industries was originally developed for use with aluminum wiring and connections. Older aluminum alloys, now rarely found in todays wires and connectors, had a tendency to develop a tough oxide film inside connections that could lead to fires. The less noble zinc dust in No-Alox might act like a propeller anode and provide sacrificial protection in aluminum joints. However, it actually accelerated corrosion on the copper and solder test samples, which were significantly damaged.

Bottom Line: We do not recommend this product for marine use.

This product was a real standout in our 2010 salt-spray torture test. Weve used this on everything from battery posts to GPS cables. Unlike the other conductive greases in this review, No-Ox-Id does not contain metal particles, and we wonder if it belongs in the waterproof grease category. Whatever the case, it has delivered consistently superior performance and doesn’t suffer from the problems that can come with metal additives.

Bottom Line: This is our only

This medium thickness grease from Thomas and Betts is loaded with copper particles. For many years, marine professionals have used it to prevent nuts and bolts from seizing and to protect electrical connections. In our view, the makers claim that it copper plates the surfaces it joins doesn’t make sense in a marine system, where the wires and connections are already copper, or pre-tinned copper. It is clearly not a good choice for aluminum. It was demonstrably less effective than Green Grease in our tests.

Bottom line: This product might be of some benefit to copper-copper joints, but wed avoid using it anywhere that seawater (or salt air) might be encountered.

The primary enemy of a good connection is corrosion, so anything that excludes water and oxygen from the connection is beneficial. For sensitive circuits where minor bleeding of current is problematic, dielectric grease is recommended. Use this on GPS cables, multi-pin connectors, and spark plugs. For general use, Green Grease, Lanocote, and No Ox Id provide superior corrosion protection

Although we found many anecdotal reports of conductive grease serving as an effective joint compound for aluminum wiring and connections, this is not particularly relevant to marine systems, and we could not find any science to support the claims. Moreover, our tests clearly showed that in the presence of seawater these products can increase the risk of damage due to galvanic corrosion.

Our dip into the world of greases is not over. Next is a study of anti-seize compounds-a project that anyone who has scarred their knuckles trying to free a seized bolt will appreciate.

For this round of testing, we repeated our static corrosion protocol (“Winch Grease Corrosion Tests,” PS, October 2016) using only a copper/solder pairing. This time we elevated the temperature 140F, as is typically done for engine coolant testing, both to accelerate corrosion and to mimic a connection that is running warm.

The test period was 14 days and the test fluid was 30 percent seawater; a combination of environmental stresses, which, based on industry experience, should mimic 5-10 years of normal use in a damp environment. To determine if conductivity was impaired or improved using any of the products, we measured temperature rise in a slightly over-loaded extension cord plug (25 amps in a 15-amp plug), using a fresh female part for each test.

1. By coupling dissimilar metals and soldering the unions, testers were able to compare corrosion protection of the various products. This is how the samples looked after emerging from the hot salt bath.

2. The test coupons were immersed in the heated salt bath for 14 days.