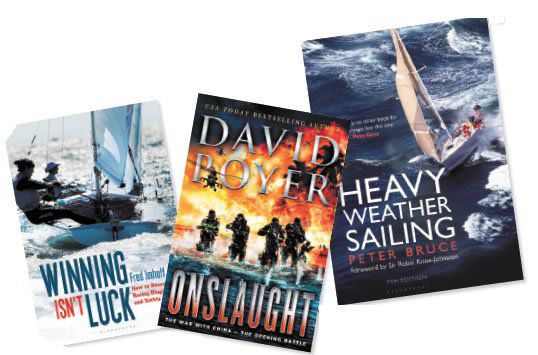 Practical Sailor editors have put together a roundup of marine-related books that we think are deserving of a spot in your library. Most are new titles, and they run the gamut from fiction to how-to guides. Enjoy.

Its been almost 40 years since Lin and Larry Pardey cast off on Seraffyn with a plan to sail as long as it was fun. This winter, the popular cruising mentors released their 12th sailing book, Taleisins Tales: Sailing towards the Southern Cross (L&L Pardey Publications, 2017, $19). The book recalls the 1984-85 South Pacific leg of the couples circumnavigation aboard Taleisin, a 29-foot, 6-inch monohull that they built and cruised for 26 years. The story takes us from their shakedown cruises to a year in the Sea of Cortez, French Polynesia, Samoa, Tonga, and New Zealand. Today, its hard to picture a small, home-built boat navigating across the Pacific with only a sextant, a chronometer, and a stack of paper charts-no digital chartplotter, radar, or backup GPS in sight. Purists will especially enjoy the Taleisins Tales chapter on tacking an engine-less boat through reef breaks in the Tuamotus atolls. There is pleasure in madness, Lin quotes from a 17th-century poet in regard to the adventure, which none but madmen know. Youd be mad to miss this one.

Speaking of madness, Edward Renehans new book on Donald Crowhurst and the Golden Globe Race adds a new depth of storytelling to a tale of madness that many sailors are familiar with. Desperate Voyage: Donald Crowhurst, The London Sunday Times Golden Globe Race, and the Tragedy of Teignmouth Electron (New Street Communications, 2016, $10, $5 digital) is Renehans account of the 1968 Golden Globe race, which was the first solo, non-stop, under sail race around the world via the three great capes of the Southern Ocean. While other books-The Strange Last Voyage of Donald Crowhurst (1970) by Nicholas Tomalin and Ron Hall, and A Voyage For Madmen (2001) by Peter Nichol-are compelling reads and often considered to be requisite maritime literature, with their larger-than-life cast including Sir Robin Knox-Johnston, Bernard Moitessier, and Francis Chichester, Renehans recounting of the voyages unveils new information gathered from documentaries and interviews, and it benefits from the passing of time. Was Crowhurst really mad? Are we all? The story, and the questions, never get old.

The History of Sailing in 100 Objects by Barry Pickthall (Bloomsbury Publishing, 2016, $25 hardback, $13 digital) presents the technological developments and human achievements that have marked the turning points in 5,550 years of sailings history. We liked this books interesting and unique perspective into nautical history. Arranged chronologically, the book begins with a pot dated 3500 B.C.: the Naqada II pot. This ancient relic depicts a boat with palm frond sails traveling the Nile River, Africa. A Viking warship dated 846 A.D., and the 1869 Cutty Sark, along with several other historical vessels, are included in the 100 objects. Sailing advancements are described through the objects featured across different eras: the sextant, the life jacket, the liquid compass, spinnaker, Optimist dinghy, GPS. Object 100 is the 2006 GoPro waterproof camera. These cameras, attached to the foiling catamarans on San Francisco Bay during the 2013 Americas Cup, brought the history of sailing-screeching and spray-filled-into the next modern chapter.

On a drunken evening in New Yorks exclusive Union Club, three of the richest young men in America made a bet that would change the history of sailing. On this fateful night, James Gordon Bennett Jr., Pierre Lorillard, and George Osgood argued over who owned the fastest yacht-an argument, they decided, that could only be settled by a transatlantic race. Sam Jeffersons Gordon Bennett and the First Yacht Race Across the Atlantic (Bloomsbury Publishing, 2016, $18, $10 digital) is a colorful, fast-paced race through mid-18th-century America, at the start of the Gilded Age. Through Bennett and his sleek, black-hulled yacht Henrietta, Jefferson writes of the birth of transatlantic racing, the titans of American industry, and the new era of leisure where adventure became a commodity that had to be artificially manufactured for the idle.

The American Sailing Associations Cruising Catamarans Made Easy, the official manual for the ASA Cruising Catamaran course, produced by the American Sailing Association (ASA, 2016, $24), is an easy-to-follow textbook for the ASA catamaran standard. The book outlines what the skipper and crew of an auxiliary-powered, 30- to 45-foot cruising catamaran would need to know in coastal waters in various wind and sea conditions. It includes a short history of catamarans, an analysis of multihull vessels, sail plans, heavy-weather and anchoring tactics, and emergency preparedness procedures. Its a great choice for monohull sailors who are considering chartering a catamaran.

Sail: A tribute to the worlds greatest races, sailors and their boats (Aurum Press, 2016, $24), by Timothy Jeffrey, is a celebration of the sport of sailing. Beginning with a foreword by Olympic sailing success Ben Ainslie, the book delves into offshore races, round-the-world races, and coastal races before tacking toward historys great sailors, and ending with a technical analysis of racing boats. Jeffrey, the 2014 Americas Cup communications director, has raced and sailed more than 200,000 miles. Racing sailors will appreciate the perspective Jeffrey offers in his coverage of the sport.

The newly released, seventh edition of the classic Heavy Weather Sailing (Bloomsbury Publishing, 2016, $29, $28 electronic), by Peter Bruce, incorporates changes in recommendations regarding heavy-weather tactics, and includes updated thinking on anchoring, storm sails, and storm preparations. The new edition also includes an analysis of some recent sailing tragedies (such as the Cheeki Rafiki) and a look at modern yacht design. Chapters from the original edition with expert advice from the likes of Olin Stephens and others remain. Bruce took over the fourth edition of Adler Coles original Heavy Weather and continues to make the classic text relevant and essential for modern ocean voyagers.

Sailors who have visited the Galapagos Islands will recognize William S. Schaills fictional cast of characters in Death of a Siren (Academy Chicago Publishers, 2016, $15). A former New York policeman sails to the Enchanted Isles and gets caught between warring local and German factions while trying to solve the murder of a reclusive German baroness. While the novel is set during World War II, the political chess game of port captains and power structures is the same today. Schaill lived in the Galapagos in 1961 and is a former U.S. Navy lieutenant.

Onslaught: The War with China. The Opening Battle (St. Martins Press, 2016, $28), by David Boyer, is the second book in Boyers four-part The War With China series. The story picks up where last years Tipping Point left off. Capt. Dan Lenson and his crew aboard the USS Salvo battle the enemy in the South China Sea while struggling to find an unknown assailant aboard their own ship. Boyers military fiction-in which coordinated cyber attacks on American computer, satellite, and financials networks coincide with Chinas invasion of American allies in the Pacific-draws from very real concerns in todays world. Boyers previous works have been required reading in the Literature of the Sea course at the U.S. Naval Academy, and we highly recommend this new one for those who enjoy nautical fiction.

After dominating the Flying Dutchman class, racing in the Olympics, and winning European and international sailing titles, Fred Imhoff doesn’t believe he is a better sailor than his competition. He believes hes simply better prepared. In Imhoffs new Winning Isnt Luck: How to Succeed in Racing Dinghies and Yachts (Adlard Coles, 2016, $22, $13 digital), the author outlines the steps to success in dinghy racing and yacht racing. The narrative, while a bit dry, is straightforward and concise with strong details on race preparation and racing. Chapters include advice on setting priorities and preparing; budgeting, organizing, and readying your gear; studying your course and working with your crew; and trimming sails. Imhoff also offers direction on the best ways to take advantage of currents and tides, and he emphasizes sailing with a positive attitude.