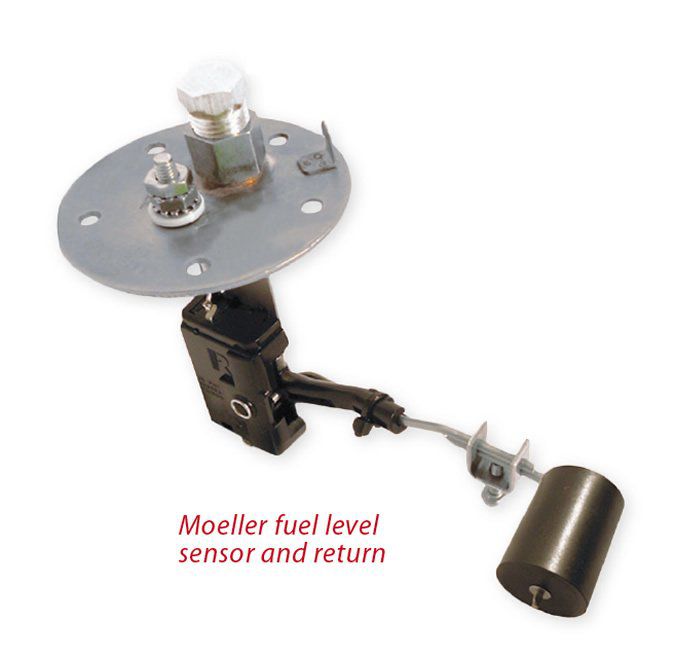 I have a 2008 Gemini 105MC catamaran that I purchased new, and the fuel tank level indicators on both tanks failed a couple years ago. However, I noticed that the fuel-return line is attached to the top of the fuel level sensor. It seems to me that this may be the problem-fuel spraying down on the level indicator shortens its useful life. All the other Gemini owners that I know also have had the level indicators fail. It is not a huge problem. My tanks are transparent so I can see the fuel level in the tanks. My friends who have black non-transparent tanks use a wooden stick-which can be inserted down the fill hose.

However, these alternatives are awkward. It would be nice to get the remote reading indicators functioning. As I understand, for Westerbeke diesel engine fuel system like the one on the Gemini 105MC, there should be five ports on the tank: (1) fuel fill, (2) tank vent, (3) fuel supply or suction line, (4) fuel return, and (5) a fuel level sensor. The tanks installed by the Gemini manufacturer only have four ports, and none of the replacement sensors that Ive researched have a hose connection for a return. I was thinking of putting a T-connection on the fill line making it dual use: filling the tanks, and when the engine is running it is the fuel return. I think this is preferable to trying to add another port in the tank.

There is much to be said about your current approach. Visually checking the level is cheap, fool proof and has no moving parts. But yes, it is a hassle, especially at night. We have tested several different types (see Boat Holding Tank Sensor Long Term Test, in PS July 2009), and liked the ultrasonic sensors, of which there are now several different varieties. Most of these comply with NMEA 2000, which means you can check fuel level at multiple locations on the boat, including on your multifunction display. Prices for ultrasonic sensors start at around $180.

Your Gemini is equipped with a basic lever arm float-sensor (see picture). Starting at about $60, this is the least expensive type of sensor that can be used with a remotely mounted fuel gauge. On one end of the lever arm is a float that rises and falls with fuel level, at other end of the arm is a variable resistor that controls the flow of electricity back to the gauge.

Because the circuitry on this type of fuel is exposed, it can be more prone to failure than other types. We spoke with engineers at Moeller, a major manufacturer of polyethylene tanks in the U.S. Moeller does not make its own sensors, but it is very familiar with the various products on the market.

According to them, the combined return line-sensor is designed so that fuel from the return line doesn’t come into contact with sensitive components in the sending unit. They said they had not seen any indication that the combined units were failing at an unusual rate, but conceded that a hermetically sealed reed-type sensor (about the same price) would be more resistant to moisture-induced corrosion. Unfortunately, the only combined type that we could find is the float type that you have. Moellers latest universal gasoline sensor with return line has less metal than previous sensors, so we expect it will be less prone to corrosion than the one you are replacing.

Although complicated by the required reductions in hose diameter, your proposed replumbing through the fill hose will work. Some people who have used the vent line as a return, but we would not recommend this approach.