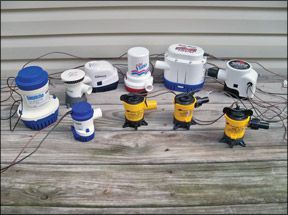 In the Feb. 15, 2004 issue, Practical Sailor reported on our extensive test of electric bilge pumps, which covered products from seven manufacturers with flow rates that ran the gamut. In 2000, we tested dozens of pumps: manual units for the April 15 issue and electric pumps for the June 1 issue.

This year, we divided the test field into two groups of centrifugal electric bilge pumps based on output to enable more of an apples-to-apples comparison and to make the data easier to digest.

Keep in mind that advertised output is usually the flow rate at the outlet and doesn’t reflect real-world capacities. Recently, the American Boat and Yacht Council began stipulating that manufacturers also rate pumps under two more realistic conditions: with a head height of 1 meter and a hose length of 3 meters, and with a head height of 2 meters and hose length of 6 meters. Head height is the vertical height of the hose outlet above the pump outlet. When comparing output specs on two different pumps, make sure the rating criteria are the same.

In our September issue, we looked at eight bilge pumps with a rated output of 1,600 gallons per hour (GPH) or more. This month, we compare the performance of 10 pumps rated at 1,500 GPH or less to see how they fared in exhaustive bench testing. These lower-capacity pumps typically use less power than the larger ones like those we reviewed last month. They also can fit in the tight confines of small-boat bilges. For most applications though, we recommend using one in this size range as a daily-use pump to take care of rainwater or other incidental bilge water since it has a low energy appetite; you would want to have a larger-capacity pump mounted as well to handle the bigger pumping jobs. (See “Tips & Techniques” on page 30.)

As with our comparison of higher-output pumps, testers measured flow rates and power ratings on all pumps at two voltages (12.2 and 13.6 volts) while pumping fresh water into a tank set 4 feet above the pump. We also tested for compliance with the American Boat and Yacht Council (ABYC) standard that requires a bilge pump to be able to run dry at design voltage (13.6 volts for a 12-volt pump) for at least seven hours without failure. In the final analysis, we picked the top-rated pump based on performance, warranty, wiring, and price.

We mounted each pump to the test bench, added crimp-on ring connectors to the factory leads, and then connected them to a fuse panel. Two feet of No. 14 wire connected our 50-amp CSI Speco PSR-50 power supply to fuse blocks energizing the pumps. We monitored the supply voltage with a Fluke multimeter and the pumps temperatures with a Craftsman infrared thermometer.

Testers ran the pumps for one hour at 12.5 volts, then at 13.6 volts for seven hours. All pumps passed the dry run portion of our test for ABYC compliance.

To rate flow output, testers monitored supply voltage and used a Craftsman clamp-on ammeter to record power usage; voltages and current draw were both measured at the power supply. Testers timed how long it took each pump to fill a container of known volume, then used this to calculate each pumps flow rate. Each pump was tested twice at each voltage, and outputs listed in the Value Guide on pages 28-29 are the average.

The pumps were tested using standard bilge pump hose sized to fit the pump discharge, which in all but two cases was 1 1/8-inch diameter hose. The Johnson 750 and 500 GPH pumps utilized three-quarter-inch hose.

The test setup included a plastic 45-gallon supply tank and an 18-gallon receiver tank. Prior to each test run, the supply tank was filled with approximately 30 gallons of fresh water. Each test pump was temporarily mounted onto a half-inch-thick piece of wood, placed at the bottom of the supply tank, and held in position with lead weights.

Testers used appropriately sized Shields VAC XHD Series 148 hose (in 6-foot lengths) connected to each pump with a single clamp. It is smooth bore tubing and is recommended for use as bilge pump discharge hose. The other end of the hose was attached using a single clamp to a typical plastic bulkhead fitting mounted in the receiver tank, which was marked in two-gallon increments and located 4 feet above the level of the pump to simulate static head pressure.

Head pressure is the resistance that a pump has to overcome when pumping water from the bilge, up and out of the boat. It includes the resistance generated by the vertical distance the pump has to move the water up and any resistance generated by the discharge hose due to kinks, ribbed interior, and the like. Our test runs included 4 feet of head, which was more of a challenge for the pumps than the 3 feet of head most makers use in their GPH-rating tests. Because of this difference, our GPH results for the pumps were lower than those makers claim.

The Speco power supply fed each test pump through 15 feet of No. 14 wire. The wiring for all pumps was 16-gauge tinned copper. One aspect of the wiring that is of most concern to an installer is the length of the leads, which in our opinion, can’t be too long. If the leads are too short to reach the bus bar, youll be forced to add more wire with a butt connection or junction box, either of which provides an opportunity for corrosion. The longer the leads, the farther away you can keep the connectors from the corrosive environment of the bilge.

We tested the Rule Model 02, rated at 1,500 GPH, and the automatic Rule-Mate 1500. Both well-made pumps are common on recreational boats. Of the three 1,500-GPH pumps tested, the Rule-Mate 1500 provided the least output but was the most expensive of all the pumps tested. Like the other Rule-Mate model tested (September 2010), the 1500 features a mounting base strainer and a removable, secondary mesh strainer that help keep debris from clogging the pump. Its built-in float switch triggers the pump, but the design doesn’t offer a way for users to test the floats function.

The Model 02 was a moderate performer; however, the Model 02 reached the hottest temperature of the group (179 degrees) during our dry run test. A pump that is too hot to hold can be cause for concern when a float switch gets stuck or the pump is left on by mistake. The Model 02 also had the shortest leads of any of the 1,500-GPH pumps tested.

Bottom line: Both Rule pumps were outperformed by others with better pumping capacity (for less money).

The best testimonial to the Shurflo 1,500 GPH pump however, was its output rate. It filled our test tank faster than any other pump in this group at both test voltages. While it drew about double the power of the other pumps, it delivered in terms of water moved, clearing 10 gallons in 26 seconds. The 1,000-GPH Shurflo needed 55 seconds to move the same volume.

Bottom line: Based on output, warranty, pricing, and construction, the Shurflo 1,500 is testers top pick in this test group, and the 1,000 GPH Shurflo is our Budget Buy.

Attwood provided two pumps for our comparison, the Sahara S1100 automatic pump and the cartridge style T-1200 Tsunami model. Both pumps are well made and performed well during our tests.

The Tsunami has a twist and lock mounting base, and can be disassembled into three parts-cartridge (replaceable motor core), housing, and base-for easy cleaning and servicing.

One of three automatic pumps tested, the Sahara uses a float switch, and features an external knob that allows users to test the floats operation. Its appetite for power ranked in the middle of the 10-pump field.

Bottom line: The Tsunami was our favorite cartridge-style pump with regards to price, output, and ease of cleaning. In the automatic pump category, the S1100 outperformed the Johnson Ultima and output was comparable to the larger Rule-Mate 1500, but costs $43 less.

The Ultima uses electronic sensing technology to detect water. An external touch pad allows users to test the switchs operation. Unlike a float switch, the digital sensor has no moving parts and cannot be fouled by debris or oil, the maker claims. According to Johnson, because the sensor is totally sealed, there are no exposed parts that can corrode. Testers like the idea of a sensor that can’t jam with debris, so long as it works as advertised, which it did during our tests.

We tested the Ultima and 1250 model with the standard 1 1/8-inch hose, and tested the 750 and 500 with three-quarter-inch hose. The 1,250, 750, and 500 GPH models used the least power of any pump tested, but their performances reflected that. With considerably smaller output hoses and outputs rated at about half that of the other pumps, the 500 and 750s comparatively lackluster performances are understandable.

Testers were not impressed with the accessibility of the strainer for cleaning in the 1250, 750, and 500 cartridge pumps. The cartridge separated easily enough from the body, but for complete access to the strainer, users have to remove the pump mounting screws, turn the pump upside down, then remove the two screws holding the strainer to the base.

Bottom line: Among the cartridge pumps, the Johnson models lagged in ease of cleaning/servicing and performance. While we like the idea of digital sensors for automatic pumps, the Ultimas output didnt match that of the Sahara.

When selecting the best overall pump from such a diverse group, a number of factors have to be considered to make the choice meaningful as it relates to the real world. In addition to performance, all of our top picks rated well for price, wiring, quality of construction, and warranty.

Topping the 1,500 GPH and under field was the Shurflo 358-000-00, which notched Best Choice honors in this group. It also was the only pump with a 360-degree output option.

We Recommend the Attwood Sahara ($78), our top pick among the automatic pumps we tested. Testers liked the Ultimas sensor technology, but performance took precedence in this test.

Testers also recommend the Attwood Tsunami ($34), the best of the easy-to-service, easy-to-clean cartridge pumps tested. The Shurflo 355, the top performer among the 1,000 GPH and under pumps, takes Budget Buy honors.