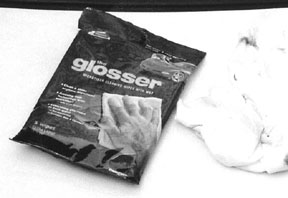 At Practical Sailor, we’ll try anything that offers even a glint of hope that caring for a boat might be made easier. So, when CleanTools, Inc., sent along a cleaner called “The Glosser,” we read the printing on the package (hype, instructions, etc.) carefully.

The claims for The Glosser are extravagant. PS was particularly taken with the statement, “It even washes away acidic bird doo…,” because that’s of great interest to many boat owners.

Getting technical now, “The Glosser is a disposable triceraphilic microfiber (three-layer, wax-filled microfiber) that carries cleaners and waxes in the middle layer.”

Off we went—not to the harbor, but to the driveway. (We’ll put stuff on our cars that we wouldn’t think of using on our boats.) We used The Glosser on a white Chevrolet, not washed in weeks, that had several bird droppings on it. This microfiber cloth is extremely soft to the touch, and it is slightly damp, but has little odor.

As expected, The Glosser easily removed most dirt. However, it struggled on some stains of an unknown origin. To remove those spots, it took 20-25 strokes, pressing hard.

Bird stains were even more difficult, requiring up to 100 passes to clear the discoloration. The Glosser was effective, but it was hard work.

Perhaps the truest statement on the package was, “The Glosser removes dust and dirt from the instrument panel, console (removes coffee stains from hard plastic), interior vinyl or leather, doorjambs, engine compartment, chrome and rubber fixtures.” Of course, water lightly laced with ammonia, Clorox, or plain old detergent will do the same job.

The Glosser would be nice for a morning wipe-down in the cabin. But at more than a buck a pop, it’s too expensive for us.