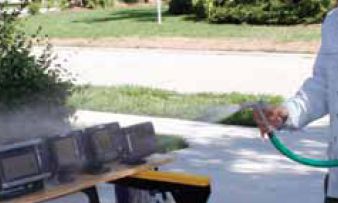 Fogging screens, water intrusion, poor visibility in bright sunlight, and slow redraw rates are the most common complaints we get regarding plotter-sounders. Better construction, new screen technology, and faster processors in our current crop of units seems to have addressed these issues. None of our products experienced serious problems during our environmental testing. Our tests focused on four key elements:

Ease of installation: Testers used accompanying literature to install the units as directed and evaluated directions for interfacing with peripheral devices. They made two mock call to customer support at lunch hour on a weekday, asked identical questions, and rated the response.

Screen visibility: Three testers subjectively rated screen visibility in bright sunlight (with and without polarized sunglasses), at night, and in shade. Screens were viewed from different angles. Dimming ability and palettes were compared.

Environmental tests: Testers evaluated resistance to heavy splashing and rain by simulating the IPX6 standard tests which requires a device to withstand water sprayed through a 12-mm nozzle at a rate of 100 liters/min for at least 3 minutes.