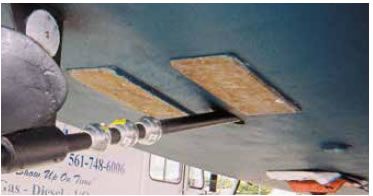 Terry Sparks, author of the book A New Ham I Am, Made Simple For Cruisers, has seen plenty of HF radio installations-both SSB and HAM-and he noticed that even some expert installations fell short of those installed by pure amateurs. He offered this advice on how to avoid common pitfalls, whichever route you take:

The best installations I see are those installed by the owner, even if they are not all that technical. They take their time to make it right. Frequently, they may have a technical friend to help or just purchase books to help them through the process. Knowing how the equipment is installed, tested, and how it works will help them later in the cruising life.

If the radio equipment is to be installed by others, a cruiser should make sure that their installer has a General Class Radiotelephone commercial license and that they possess the proper test equipment to confirm proper operation of the equipment after the installation. Testing is not complex, but unless the installers have verified that the radio will adjust the antenna tuner and transmit at 100-percent power on each MHz band, the radio is not a radio to use cruising.

Radios that were powered through the breaker panel instead of a direct connection to the battery with the proper wire size can provide interference to other systems, can pick up noise from circuits like the alternator, and result in low power and distorted transmitted signals from the HF SSB.