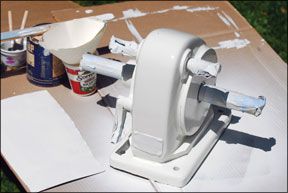 I’ve got an old manual anchor windlass with a badly corroded gypsy that needs to be replaced. There is a 1:1 bronze “cross” on the outside of the gypsy—where the lever fits to turn it when not using the geared mechanism. Unfortunately, I can’t

figure out how to get the bronze cross off, which needs to happen in order to replace the gypsy. There’s a grease zirk/fender washer on the outside of the cross, but unscrewing it still doesn’t get the cross off.

The drum on the port side came off relatively easily after removing a bolt and fender washer, using a wheel puller. The drum was prevented from slipping on the shaft by a piece of wood in a quarter-inch slot where originally I presume there was a steel key.

Also, I can’t find any manufacturer’s information anywhere on it. I’ve attached a couple of photos. Do you know who the maker is?

The windlass in the pictures you sent is an old Simpson Lawrence, a British-engineered oddity that many owners

cursed. They used a chain rather than a gear drive, and this led to problems. The cast-steel chain gypsy, aluminum case, and the chain issue make your windlass a less than prime candidate for rebuilding. We would recommend instead looking for a used manual Nilsson windlass. While Nilsson has been out of business in the U.S. for a while, the company’s used windlasses are a good find. Check out secondhand chandleries, nautical flea markets, and eBay. A little TLC and a good check of the windlass’ bearings, gears, seals, and housing can turn a derelict piece of hardware into a “like new” foredeck appendage.

We featured the rebuild of an old, reliable hand-crank Nilsson in the October 2009 issue. It was in the final stages of a refit and was awaiting a new paint job. When painting cast-aluminum housings like the Nilsson’s, prep is especially important because they love to oxidize, particularly under a glossy finish coat.

The key to success lies in the abrasive removal of all old paint,

primer, and oxidation. Next comes a solvent wipe down, followed up with a single, very thin coat of etching primer, such as Interlux’s acid etch primer 353/354. As soon as the surface dries, overcoat with 404/414 barrier coat, scuff sand, and apply two or more coats of a one- or two-part urethane topcoat such as Toplac or Perfection. Spray application offers the best results, but carefully follow all safety precautions.

Insulating the bolt holes and windlass body from the stainless-steel mounting bolts will prevent galvanic corrosion that can harm the finish.