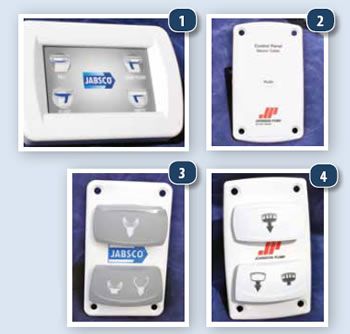 Several of the units PS looked at came with what might be called “smart” flushing capability. Instead of a simple momentary switch—push to flush, release to stop flushing—these switches controlled flow and the timing of various filling and flushing functions. Most allowed for about a half-gallon of water for a full flush, and a five-second delay between rinse and flush.

3. & 4. The more rugged and nearly identical rocker switches on the Johnson Pumps Aqua-T (80-47231-01) and the Jabsco Quiet Flush allowed for simultaneous fill and flush, fill, or flush. Testers found this a good compromise between automation and manual control, without becoming too complicated.