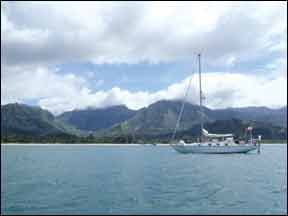 The weak point in the system is the lightweight lanyard. Recently mine gave way, and the remote bounced twice toward the rail, hung in mid-air, then disappeared overboard. You can imagine my anguish after failing to retrieve it.

I contacted Raymarine (www.raymarine.com) and told them my story. I guess it was my lucky day: Long story short, they sent me a new one! Im a huge Raymarine fan now.

I want to also give credit to West Marine. Before I called Raymarine, the manager of my local West Marine said he would bend over backward to help me. It turned out I didnt need his help, but his customer service went a long way.

My Caframo True North portable AC heater (model 9206, also sold as West Marine Portable Cabin Heater 7867500) stopped working a year after I bought it, but it had been a tough year. It had many hours service, got wet in its locker during an offshore passage, then spent time in the humid tropics, followed by a cold and wet October along the Oregon-Washington coast. I returned it to Caframo (www.caframo.com), and the company promptly replaced it with a new unit and a new five-year warranty. Its an excellent heater backed by excellent service.

We recently installed a Xantrex 3000-watt Freedom SW charger-inverter (www.xantrex.com). The unit would not go to float, so the battery banks were getting more charge than they needed. Chris at Tekris Power in New Jersey (www.tekrispower.com), from whom we ordered it, was very helpful but could not diagnose the problem remotely, instead offering to ship a replacement unit.

At the time, we were in Miami, so Chris suggested we go to the Xantrex booth at the Miami International Boat Show and talk to Xantrexs expert in this area, Don. When Don found out that we were bound for the Bahamas in four days, he got his raincoat and said Lets go look at it now. Don walked at least a half-mile with me in the pouring rain to get to the car, and then went to the shipyard with me to diagnose the unit. The problem was an advanced setting that had been changed from its factory setting. Don found the problem, corrected the setting, and the unit was cured.

My credit to Xantrex for encouraging their expert to leave the booth in the middle of a boat show to help an existing customer. Xantrex went above and beyond. And my thanks to Tekris Power, who encouraged us to go directly to Xantrex. Mike Graham The Spike, Island Packet 44 No. 14 Dallas, Texas, and Emerald Bay, Great Exuma