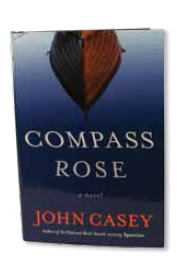 Here’s hoping fair winds and long days of sunshine await you this season! If fortune finds you in a quiet cove for a weekend—or a week—take along a few of Practical Sailor’s picks for good summer reads.

This year, the publishing world brought us a few new books from sailors who know their way around a quiet cove. Cracking open Peter Isler’s “Little Blue Book of Sailing Secrets” or the autobiographical “Gary Jobson: An American Sailing Story” is like opening a sail locker and finding it stuffed with a new sail for every heading.

Isler, a two-time America’s Cup winner, talks about sailing and racing with Dennis Conner, Buddy Melges, Russell Coutts, and Tom Whidden, all in the first nine pages. His “Little Blue Book of Sailing Secrets” (Wiley, 2011, $14, Kindle $10) includes sail tactics and short stories, vignettes, and quotes and lessons learned from other sailing legends. Isler has sailed in and won hundreds of races over the last 40 years, and he has been involved in every America’s Cup campaign since winning it as a navigator aboard Conner’s Stars and Stripes. Written more as a “what-I’ve-learned” than a “how-to” book, Isler offers sound advice on sailing, with a generous voice of experience.

“Gary Jobson: An American Sailing Story” (with Cynthia Goss, Nomad Press, 2011, $18) is the three-time All-American sailor’s 17th book on sailing. In it, Jobson, an ESPN sailing commentator and member of the America’s Cup Hall of Fame, tells of his unexpected diagnosis with lymphoma and how the incurable disease and sailing are tied up together in the reefing lines of his life.

Jobson won the America’s Cup in 1977 and the legendary Fastnet Race in 1979, both times as the tactician for Ted Turner’s conglomerate. Diagnosed with lymphoma in 2003, Jobson recounts chapters of his life through diagnosis, treatment, and remission. He looks at how his life has intertwined with some of the greatest sailors, how the sport has changed and developed since he first made his mark in the 1970s, and how sailing bonds and friendships endure like no others.

First published in 1937, the new release of the “Cruise of the Conrad” by Alan Villiers (Sheridan House/Seafarer Books, 2006, $18), is told from another voice of experience, albeit one that sailed around the world in the 1930s, when navigation did not involve a GPS and a networked system of electronics.

An Australian sailor, historian, and writer, Villiers set off in 1934 to fulfill his lifelong dream of sailing around the world. He completed his circumnavigation, more odyssey than voyage, in 1937. His full-rigged ship, the Joseph Conrad, is moored today at Mystic Seaport, as part of a maritime education program through the Museum of America and the Sea. This new edition of the “Cruise of the Conrad,” published in 2006, includes a foreword by Sir Robin Knox-Johnston, well-known as the first man to circumnavigate single-handed and non-stop.

During the time between the World Wars, Liverpool, England, was a fine spot to escape from. Flu epidemic and grinding poverty encouraged many a lad to seek a life at sea.

Holder-Jones served as a British naval officer in World War II, sailing to Iceland, Norway, and the United States, and later commanding his own ship in patrols along the Canadian coasts near Newfoundland. Parker’s writing makes one feel they’re hearing these tales of adventure whilst enjoying a pint at the pub, and Holder-Jones’s typically English understated stories of the defeat of the German U-boat blockade of the American coast, with little more than a collection of armed trawlers and whalers, are both entertaining and endearing.

John Vigor is a longtime newspaperman and a former South African sailing champion. His recently re-published “Small Boat to Freedom, A Journey of Conscience to a New Life in America” (Sheridan House, 2010, $6) recalls Vigor’s journey from his homeland in South Africa to a new life in America. Despite having a nice home and a top job as a syndicated columnist in South Africa, Vigor and his family decided to leave apartheid South Africa in the late 1980s and emigrate to America.

Vigor, his wife, and teenage son make the journey in their 31-foot sloop, Freelance, past the Cape of Storms, around the Cape of Good Hope, and across the Atlantic, eventually sailing to Washington state, where they now live.

“Small Boat to Freedom” starts with a compelling story of life in South Africa—where a family is torn between friends, family, threats to personal safety, and moral beliefs—and moves into a sailing story across some of the most treacherous and challenging sailing waters in the world. Vigor is a regular contributor to Good Old Boat magazine and the author of the best-selling book, “Things I Wish I’d Known Before I Started Sailing.”

“The Ditty Bag Book: A Guide For Sailors,” by master sailmaker Frank Rosenow, (Skyhorse Publishing, 2011, $10, Kindle $10), provides a fun, step-by-step manual on how to cut, size, and decorate a ditty bag for the boat. For centuries, sailors have used ditty bags to carry sewing and sail-mending equipment. The real treat is not the bag Rosenow teaches readers how to make, but his concise and entertaining descriptions of what’s inside and the appropriate and proper use of the tools and tactics needed for sail mending.

Chapters include information on how to repair and patch sails underway, splicing, the proper sewing techniques for leather and canvas, and a short list of items a sailor should always have ready for sail repair.

For the Fun of it

Well-known in the sailing world for her and her husband’s books on cruising and boatbuilding, Lin Pardey sets her latest book, “Bull Canyon,” far from the salt air, exotic anchorages, and rolling seas her readers are accustomed to. “Bull Canyon” (Paradise Cay Publications 2011, $25, Kindle $16) is the story of the Pardeys’ shoreside intermission to their voyaging lives. Deep in the southern California dessert, the couple found new adventures: resurrecting a rundown ranch, building a workshop, and finally, building a new boat, Taleisin, that would take them into the next chapter of their lives. In a voice her readers will find familiar, Pardey tells of the hardships and joys of living and boatbuilding in Bull Canyon, of the unique neighbors that helped along the way, and of a marriage that has withstood the tests of the high seas and the dry land.

The well-illustrated “Storms and Wild Weather” by Dag Pike (Sheridan House, 2009, $25) brings readers into the eye of the ocean’s wildest weather. Pike’s absorbing text recounts experiences of small boats and large ships fighting their way to safety, while the unsettling photographs exemplify the power of the waves.

Ten years after John Casey’s “Spartina,” an award-winning novel based in South County, R.I., Casey brings us another good read with prodigal-daughter-to-the-smart-set Elsie Buttrick, fisherman Dick Piece, and baby Rose. Casey tells this story in the voices of his female characters, namely Elsie and Rose. Best read after “Spartina,” so that you’re up to date with the characters and have peeled back the layers of the insular world of coastal Rhode Island, “Compass Rose” adds a new chapter to real but flawed characters looking for life and redemption in the worlds of salt marshes, alcoholic fishermen, crab boats, long-time homesteaders, their tangled history with the land, and the developers trying to take a piece of their world.

“Cape Cod Surprise, Oliver Matches Wits with Hurricane Carol,” by Carol Newman Cronin, (GemmaMedia, 2010, $10, Kindle $9) is geared toward young adults looking for an easy summer read. “Cape Cod Surprise” is an entertaining follow-up to Newman’s “Oliver’s Surprise,” which we reviewed in the June 2010 issue. Based in New England, the novel includes charts, photos, a glossary, and a diagram of a gaff-rigged sail—a good book to keep your young crew busy while you’re unplugged for the weekend.

What is the Bermuda Triangle? Why is a ship’s control room called a bridge? If you ever wonder such things, then “Can Squid Fly? Answers to a Host of Fascinating Questions About the Sea and Sea Life” by Tony Rice (Sheridan House, 2011, $12) will be good entertainment for your summer cruises.

Rice’s follow-up to his popular “Do Whales Get the Bends?,” this new release will answer many of the questions that come up during a day or a week at sea. Written in the same question-and-answer style as Rice’s first book, “Can Squid Fly?” addresses general questions about the sea, sea life, and man’s relationship with the ocean.