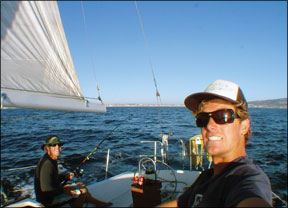 Who can forget that first day? When you finally took command of your new used boat, and, probably with a friend or spouse, sailed it home? If the boat is well used, like the nine boats featured this month (“Pracical Sailor Puts Used Sailboats from the 1970s Under the Microscope“), the odds are great that some mishap enlivened the voyage home.

I still have faded photos of my friend Steve Cannon, with his whole head wrapped up in gauze (think Bugs Bunny with a toothache), grinning at the tiller when Tosca finally met the sunlight-spangled waters of Biscayne Bay, Fla., her new home. In his chin were seven stitches, the result of a sharp blow from a slippery fuel dock on the Intracoastal Waterway. Whenever I dig up the photo, I still can smell the diesel in Steves T-shirt-residue from six hours of cycling the boats algae-laden fuel through a home-made filter. Thus began the great adventure.

Tosca cost $6,000, no small sum for two 20-somethings back in the day. But it was a bargain considering where she eventually took us. During the following three years, Steve, Theresa Gibbons (now my wife), and I roamed the Bahamas, Dominican Republic, and on down through the Caribbean to Venezuela. After that, Theresa and I sailed Tosca for eight more years … the Galapagos Islands, Bora Bora, Palau, Bali, Borneo, Singapore, Thailand. Though heavy, the 1937 William Atkin ketch was just over 30 feet on deck.

Too small? Not at all.

Used to be that 30 feet was a big boat. Check out the old brochures for the sloops in this months feature, and the implicit message is that this boat will carry you anywhere your dreams may wander. Indeed, theres no shortage of sailors who have made great voyages, even circled the globe, in boats of 30 feet or less. (Steve sailed on from Venezuela to Australia in a 23-foot mini-Transat racer.)

While the aging boats featured this month would not be my first choice for exploring the Pacific
today, with some elbow grease and upgrades, they can be an affordable start to adventures that will last a lifetime.

I don’t think it was a coincidence that I received a letter this month from Alex Messima, a recent college grad who had just bought a 1983 Catalina 30. He also sent a great photo of him and his friend David Erickson sailing the boat, Island Time, home to Los Alamitos, Calif.

Their beaming faces recalled Steves smile (minus the gauze) and the thrill we felt that day. It reminded me that you don’t need a fortune to dream big. Good friends and a 30-foot boat will do just fine.